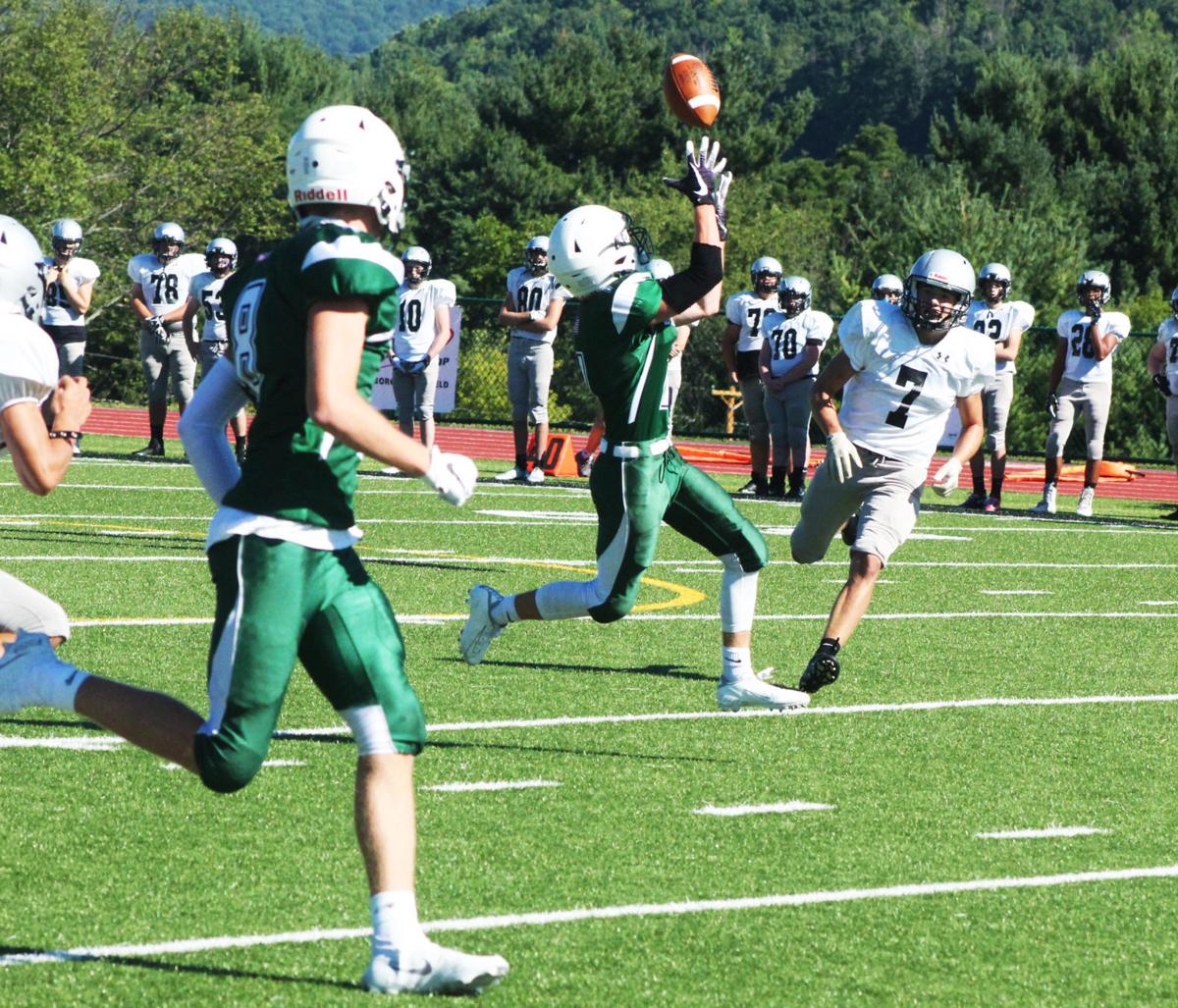 Conner Adams makes a tough catch up the middle of the field during the Wellsboro Hornets scrimmage against Athens on Saturday, Sept. 5. 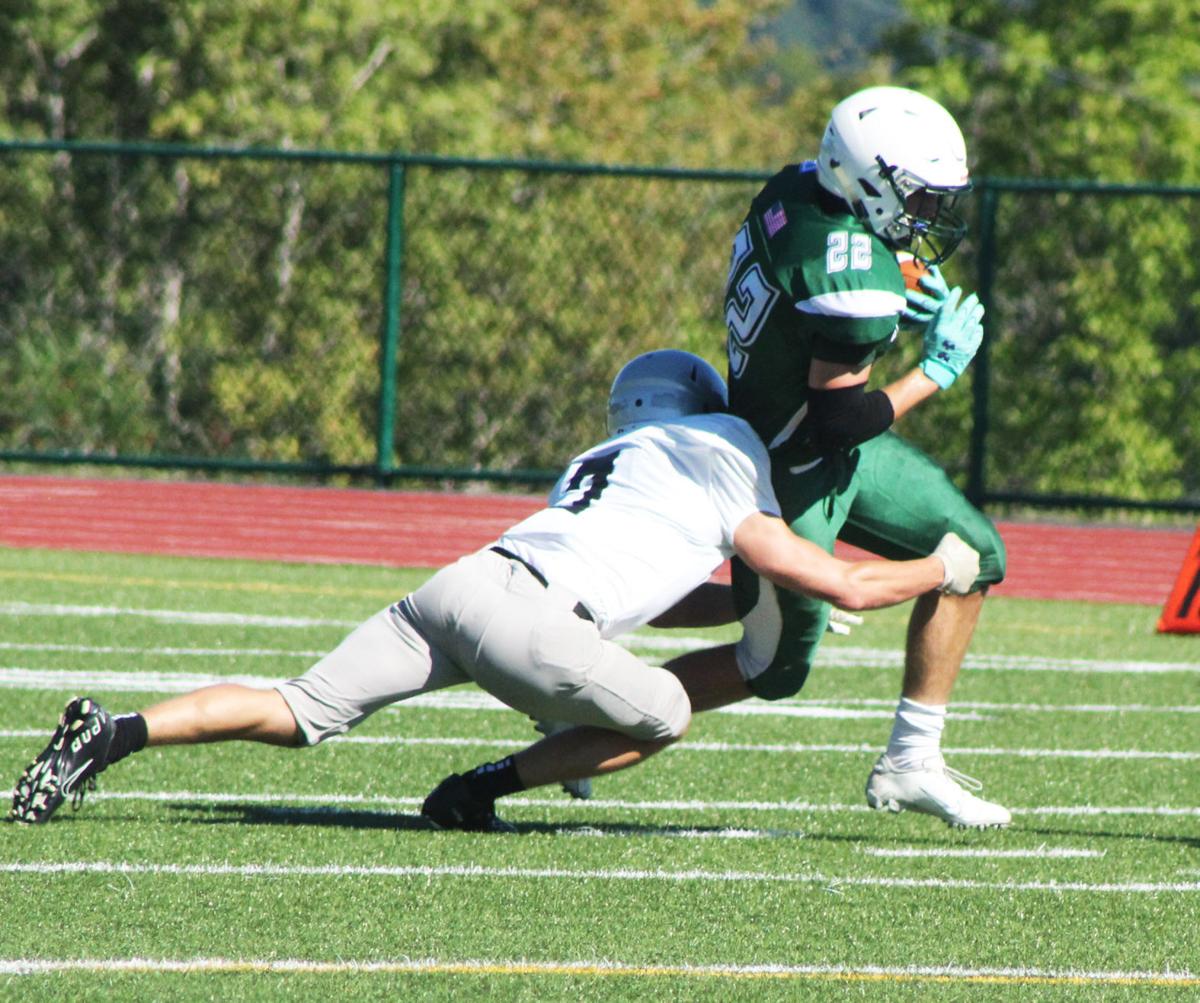 Darryn Callahan shakes of an Athens Wildcats tackler during their scrimmage on Saturday, Sept. 5.

Conner Adams makes a tough catch up the middle of the field during the Wellsboro Hornets scrimmage against Athens on Saturday, Sept. 5.

Darryn Callahan shakes of an Athens Wildcats tackler during their scrimmage on Saturday, Sept. 5.

WELLSBORO — The Wellsboro Hornets football team hosted the Athens Wildcats in a preseason scrimmage on Saturday, Sept. 5 with a chance to gain some experience as a unit after graduating 17 seniors and a large chunk of the starting offense and defense from last season.

“With the lack of practices I really did not know what to expect,” Head Coach Matt Hildebrand said. “We really had about four offensive and four defensive practices which we would usually cover in our camp.”

With limited time to prepare, Wellsboro was able to do some productive things on the field during their first live action of the season, and coach Hildebrand was very pleased with not only the effort, but also the social responsibility his players showed in taking the COVID-19 safety protocol seriously.

“The kids have done a great job of practicing social distancing and wearing masks when required,” Hildebrand said. “They want to play very bad and have done everything we have asked them to in order to help ensure we have a season. I was very happy with our effort and conditioning. The kids have worked very hard to get themselves into the best game shape possible in a short period of time. Effort cannot be coached and I saw very few lack of effort plays.“

On offense, some young players showed some flashes, with Darryn Callahan leading the running back groups with some gritty carries between the tackles.

Quarterback Isaac Keane also showed some strong throws down the field as well, with a few nice balls including an absolutely beautiful touch pass to Conner Adams in their first offensive possession down the middle of the field that covered about 30 yards.

“Our running backs were patient and waited for their opportunities, Hildebrand said. “I thought the receivers did a great job catching nearly all balls they were given a chance at. Our QB made good decisions and was able to take what the defense was giving him.”

Keane will need to continue to find his athletes down the field without the ability to lean on the run game as heavily as the Hornets did in the 2019 season.

Adams looked solid as well from the skill positions in his first opportunity as varsity starter, and as just a sophomore had some good touches throughout the scrimmage.

Defensively the Hornets played well led by a few nice plays by the front seven as well in the secondary. Callahan showcased he has the potential to be a two-way star for the Hornets and put together a few really impressive pass breakups from the cornerback position.

“Our guys were flying around and we had a lot of guys rallying to the football on defense,” Hildrebrand said. “I was pleased with our execution of our schemes on both offense and defense. We were able to identify some guys that separated themselves from others in their first live action.”

Heading into week one, the Wellsboro team will have some kinks to work out, but are confident that the players will start to hammer down the concepts and techniques of the offense and really hone in on the fundamentals.

“We had some young guys on our offensive line that got their first varsity action and I was really pleased with how they responded. Overall I was pleased with our offensive line,” Hildebrand said. “We have done a lot of moving guys around to find the best fit and I thought they all worked together and communicated well.”

Wellsboro will travel to Westfield for a week one matchup against the Cowanesque Valley Indians on Friday, Sept. 11, they topped the Indians 53-6 last season.