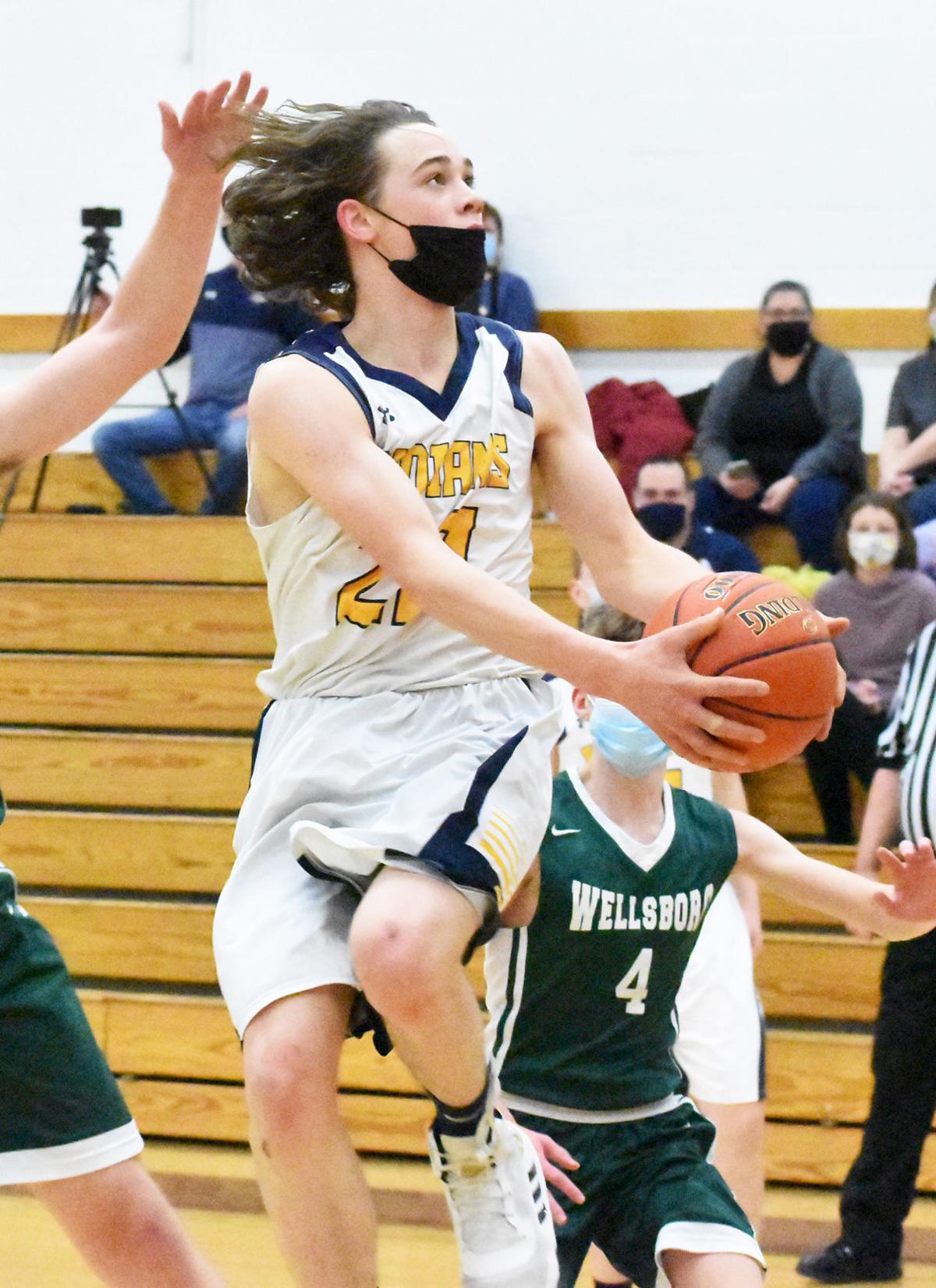 McGuire Painter goes up for a layup in the 2020 season for the CV Indians. 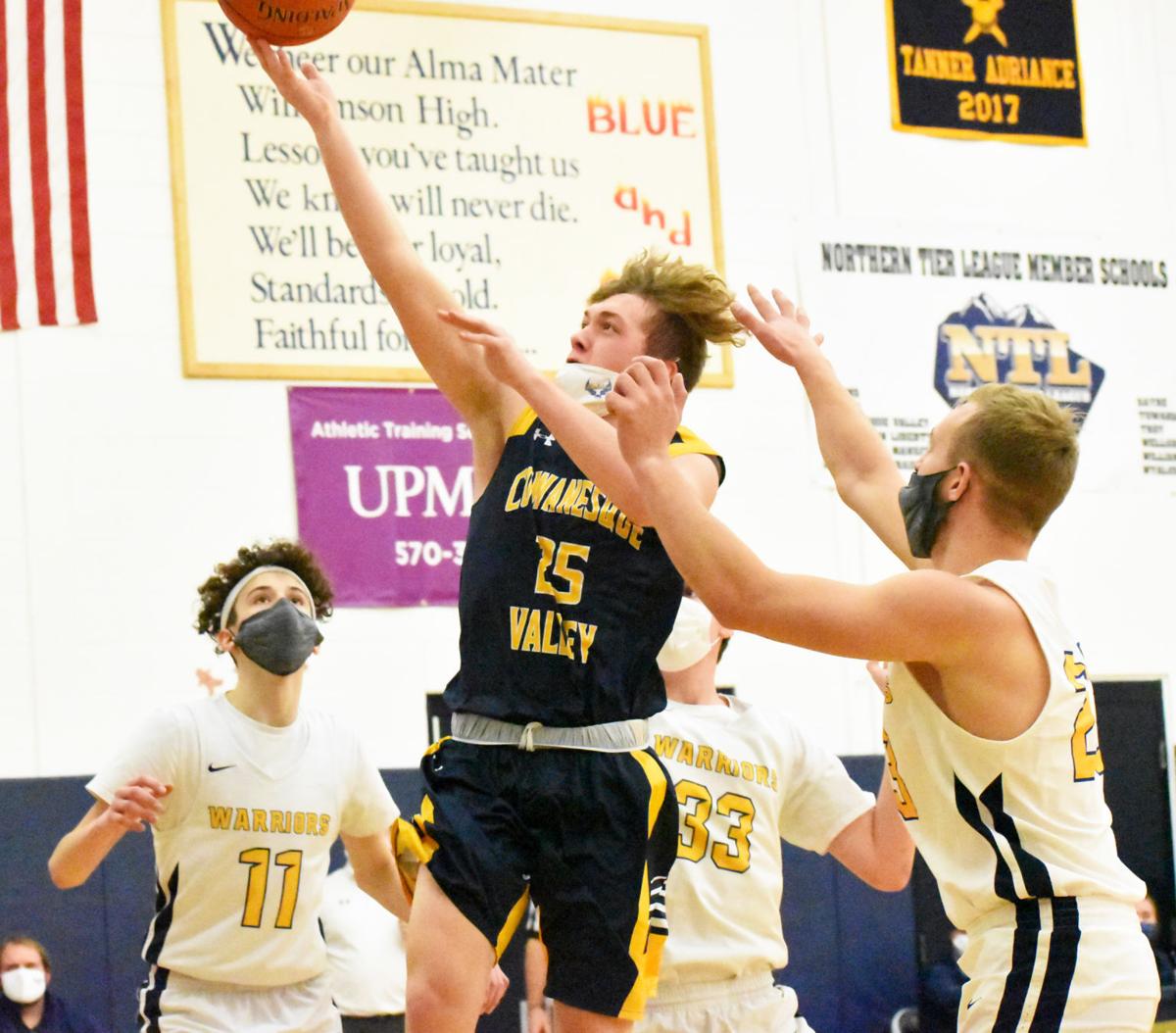 Gage Tilton rises up for a layup during the Indians win over Williamson this past season.

McGuire Painter goes up for a layup in the 2020 season for the CV Indians.

Gage Tilton rises up for a layup during the Indians win over Williamson this past season.

The 3-16 record for the Cowanesque Valley Indians basketball team in the 2021-2022 season may be a bit misleading, as the group entered their first full season under Head Coach Jason Fry, and was an extremely competitive team down the stretch of the year.

The Indians are now looking to keep that positive momentum going, and after a full offseason to prepare and learn the system, the team returns four seniors to their starting lineup and are looking to make some noise in the Northern Tier League this season.

“We got quite a few games this summer,” Fry said. “I feel like we’ve learned our offense and our defensive schemes. We were just starting to learn that toward the end of last season and I felt like we are getting comfortable. We started playing competitive ball at the end of last year and I think that carried into the summer.”

The Indians had a rocky start last season but were able to bounce back late and despite not winning many games, played toe-to-toe with any of the best teams in the league and proved that their unit is an up-and-coming one that has built a level of continuity heading into the year.

“Playing as a group has bettered us as a team,” Senior Gage Tilton said. “Coming into the season we know each other’s weak spots and strong spots. Where the shooters are, who can handle the ball, who can finish at the rim and we have better chemistry as a team.”

The chemistry will be a huge advantage for the Indians in the 2021-2022 season, as they have four seniors returning in Tilton, Tucker St. Peter, McGuire Painter and Glenn Barnes who will all have significant roles on the roster this season.

Tilton is expected to be a floor-spacer in an athletic group and play the three-point shooter and defender role.

“I believe my role on this team is to be a shooter and a lock-down defender,” Tilton said. “I have put in the work this summer working on my jump shot. After feeling well about my shot toward the end of the summer, I worked on defense and started to improve tremendously. I’m ready to contribute on both ends of the floor.”

The shooting that Tilton can provide will be an important piece to CV taking the next step, as they were only able to connect on 42 tries this past year.

St. Peter will be used as a non-traditional center in a very transition and speed-oriented offense, and his feel for the game and ability to find the ball on the glass will be another key for the Indians this season.

“I think this year we have a close-knit group,” St. Peter said. “I don’t worry about being smaller, I don’t think that’s a big deal. The coach said to me that I can see the ball off the board pretty good and it’s the same thing as football, like catching punts and getting underneath.”

St. Peter proved to have stellar ball-skills during the football season, and his feel for seeing the ball off the rim and glass will help him as he navigates a league with bigger centers.

“I would say that he reads the ball well off the rim,” Coach Fry said. “He’s not going to be a center-only player though. The big guys are going to be playing him outside, they are going to have to.”

St. Peter, who is a threat to knock down three-pointers and hit 13 this past season, will have the added advantage of forcing bigs out of the paint to respect his shot.

Another returning piece for the Indians is Barnes, who in nearly every sport is known as a player who gives extreme hustle and will be looked to as a perimeter stopper for the Indians this season.

“It’s just my lifestyle, I’ve always been quick on my feet and quick with my hands,” Barnes said.

Barnes was also a gritty defender on the soccer field, which he believes will help translate to improved basketball skills this season.

“Spacing and staying in motion,” Barnes said of his transferable skills from soccer. “Just keeping my eye on the ball.”

The final senior set to make their return is Painter, who last season was on a tear scoring the basketball and is a dark horse candidate for a possible league MVP with the level of play he displayed in his junior year.

Painter averaged 15.1 points per game, with a significant uptick near the end of the year, and is set to be the centerpiece of an offense that will look to use their speed and explosiveness to create looks.

“I think we were a timid team last year because we were kind of new,” Painter said. “I think we have developed a bond.”

Painter will be a big part of the Indians offense, and his ability to get to the rim and collapse a defense will create open looks for his shooters on the perimeter while also being able to elevate in the lane for buckets.

With a slate of four returners, there are also a few up-and-comers to look out for, with junior Carter Ackley and freshman Fletcher Good both expected to see significant floor time and make an impact immediately for an Indians’ team who will look to shock some teams this season.

“He is a workhorse,” Fry said of Ackley. “He puts in the time and helps the chemistry of this group which is good with these boys. He’s up and coming and I will be expecting a lot from him this year. Also, we have freshman Fletcher Good. We’ll be testing the waters with but we have some high expectations with him this year to fill some shoes.”

With the season set to begin in the Jack Bush Tournament, the Indians have their eyes on taking the tournament title, something they haven’t done in many years.

“We are looking to win the Jack Bush Tournament,” Fry said. “It’s something high on my priority list. We haven’t won that in quite a few years. That’s one goal and I would love to see us win out our league game. But as far as the team that I want to beat, I want to beat them all.”

With the season right around the corner, the Indians pointed to their sister school Williamson as one of the matchups they are eying this year as well as some of the giants around the league, who they believe they can compete, and beat, this season.

“I am looking forward to Wellsboro and Troy,” Painter said. “They’re some of the better teams and they always have a lot of competitors.”

Partly cloudy skies in the morning will give way to cloudy skies during the afternoon. A few flurries or snow showers possible. High near 35F. Winds WNW at 10 to 20 mph.

Light snow in the evening will transition to snow showers overnight. Low 28F. Winds light and variable. Chance of snow 70%. Snowfall around one inch.