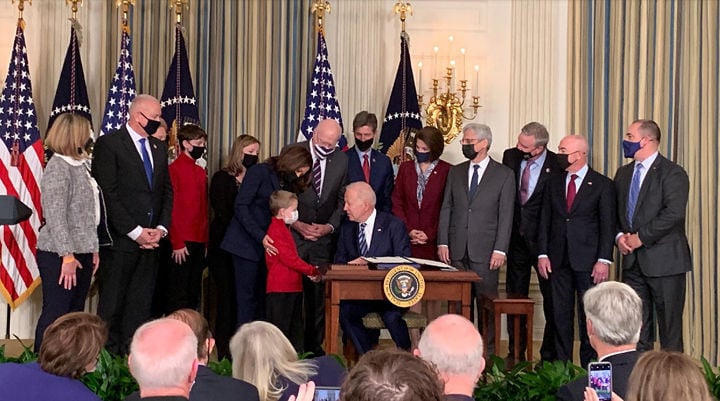 Jacob Bomba, age 7 of Tioga, shakes the hand of President Joe Biden after the signing of a bill inspired by his father. 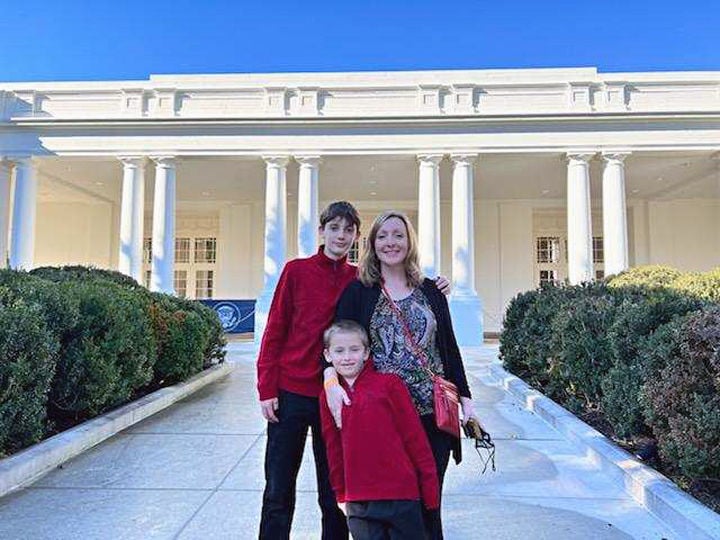 Jacob Bomba, age 7 of Tioga, shakes the hand of President Joe Biden after the signing of a bill inspired by his father.

After a tragedy just over two years ago, the Bomba family of Tioga found themselves in an unexpected place last month.

“We went to the White House on Nov. 18,” said Angela Bomba, a substitute teacher at R.B. Walter Elementary School. “The day before we were called and invited. It was kind of last minute but I’m not sure if they realized we had moved up here.”

Bomba and her sons, Jacob, 7, and Thomas, 13, were invited to Washington, D.C., by Maryland Congressman David Trone. His bill to help improve mental health care for first responders was to be signed into law by President Joe Biden and he wanted the family whose loved one inspired the bill to witness the event.

Bomba’s husband, Thomas “TJ” Bomba, was a police officer in Montgomery County, Md., for 13 years before his death.

“He died by suicide on Oct. 14, 2019,” said Bomba. “Congressman Trone was already very pro-law enforcement and about improving mental health, so when he heard my husband’s story he wrote up the COPS bill.”

Trone’s Confidentiality Opportunities for Peer Support Counseling Act seeks to “improve mental health care for first responders by creating more peer counseling programs and clear standards of confidentiality,” according to Trone’s website. The Act was signed into law by President Biden on Nov. 18.

Angela Bomba said that the stigma around law enforcement officers seeking help for mental health issues is part of the problem.

“Police officers are seen as strong and tough and to go sit down and talk to a counselor about their feelings or about what they’ve seen or what they’ve had to go through isn’t easy for them,” she said.

“In the beginning when we first moved down [to Maryland] he would tell me stories about things he had seen and then he just kind of stopped over the years because it was hard to hear and hard for him to talk about it. I’m sure that all added up, for him and other people in his department.”

In addition to the difficulties of his job, Thomas also dealt with physical ailments for about 10 years before his death.

“He had contracted a flesh-eating bacteria from the police academy where he was helping out. He spent two months in shock trauma in Baltimore and then two months in rehab,” said Bomba. “He just had everything wrong at one point; he had a brain catheter, a trach, a feeding tube, dialysis and his heart stopped twice. It was basically like he had a traumatic brain injury.”

She continued, “He was never quite the same person. So, between that and his job and depression, after 10 years, I guess he just couldn’t get back to where he was.”

Bomba and her sons moved to Tioga, where she grew up and still has family, in 2020.

“It was overwhelming, but also a huge honor. It was all legislators and important folks in the room and then here we are,” she said. “It was a great opportunity to honor my husband’s name.”

The Bombas thought they’d just be in the audience for the signing, but were asked to stand beside President Biden and Vice President Kamala Harris.

“President Biden turned to Jacob and asked him what his name was, how old he was and what grade he was in. And after he signed the bill, he turned and gave him the pen,” said Bomba. “It was very cool.”

She said the experience at the White House helped shine a brighter light around her husband’s death, which she and her sons are still grappling with.

“There’s always grief and especially this time of year when you’re putting up Christmas ornaments, it’s like a lifetime of memories comes flooding back,” said Bomba. “But I think we’re all doing pretty well considering. We’re still figuring out being a family of three.”

Partly cloudy this evening, then becoming cloudy after midnight. Low 18F. Winds SSW at 10 to 20 mph.