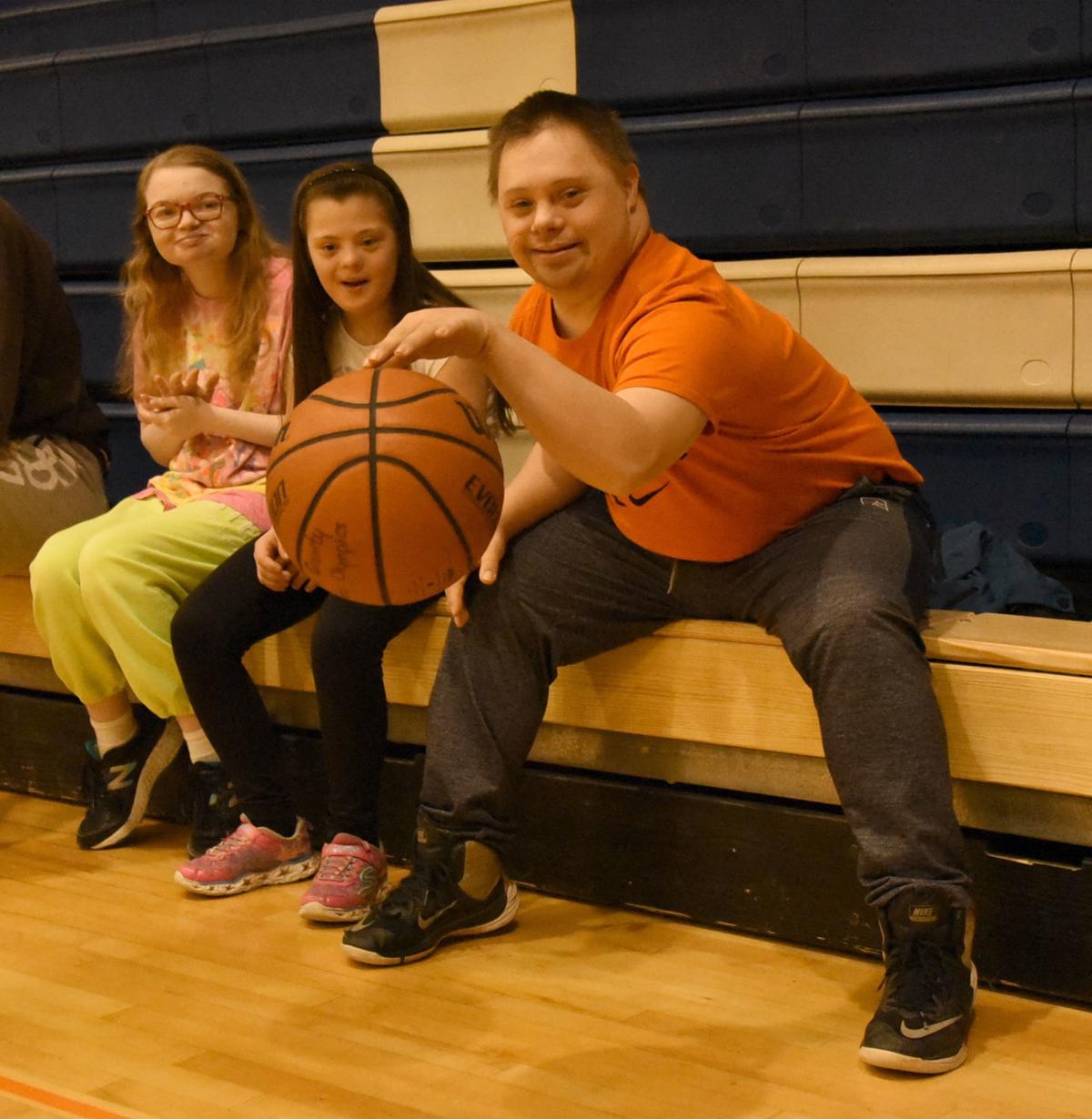 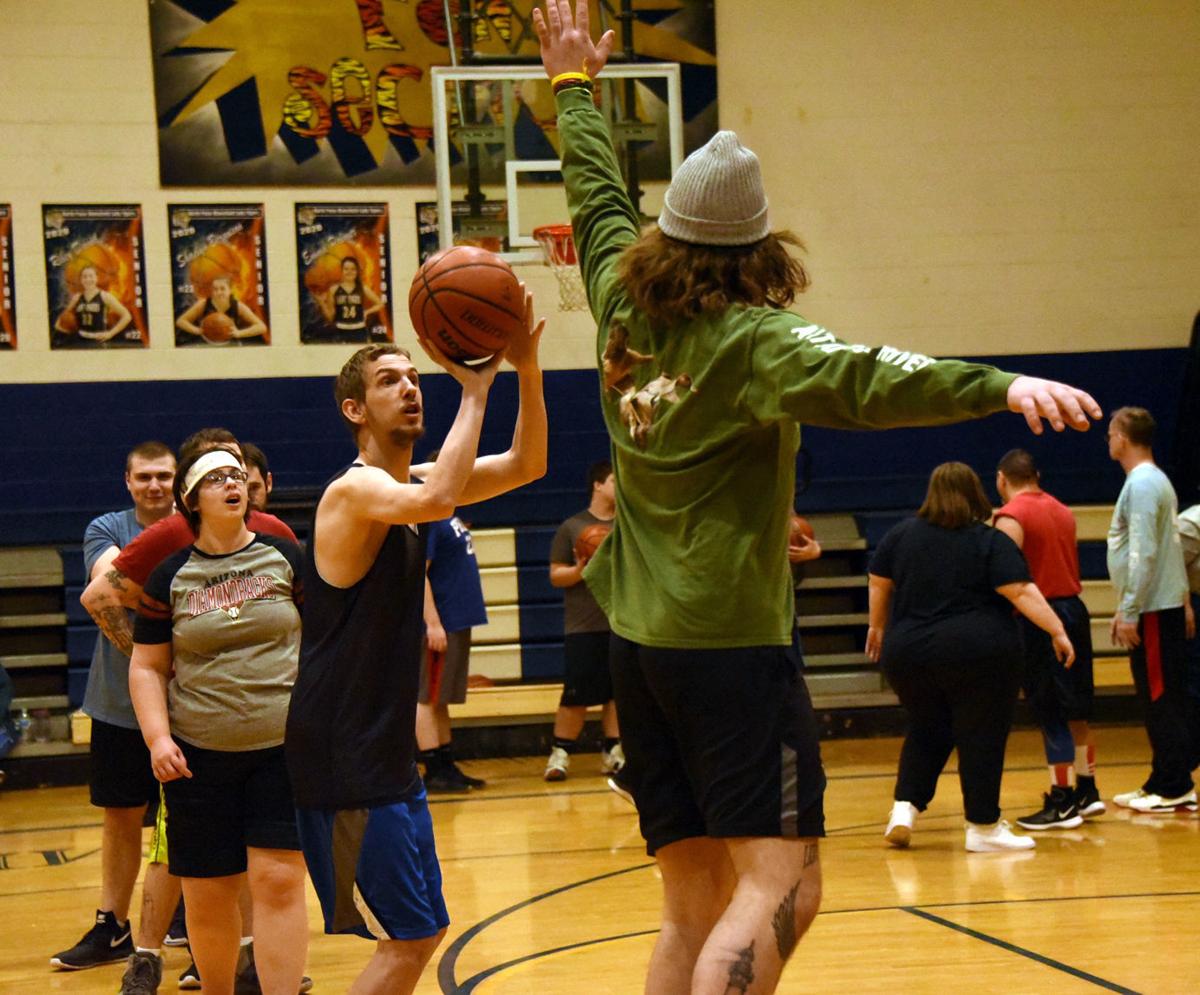 A Special Olympian takes the shot while a Mansfield University student tries to block the ball. 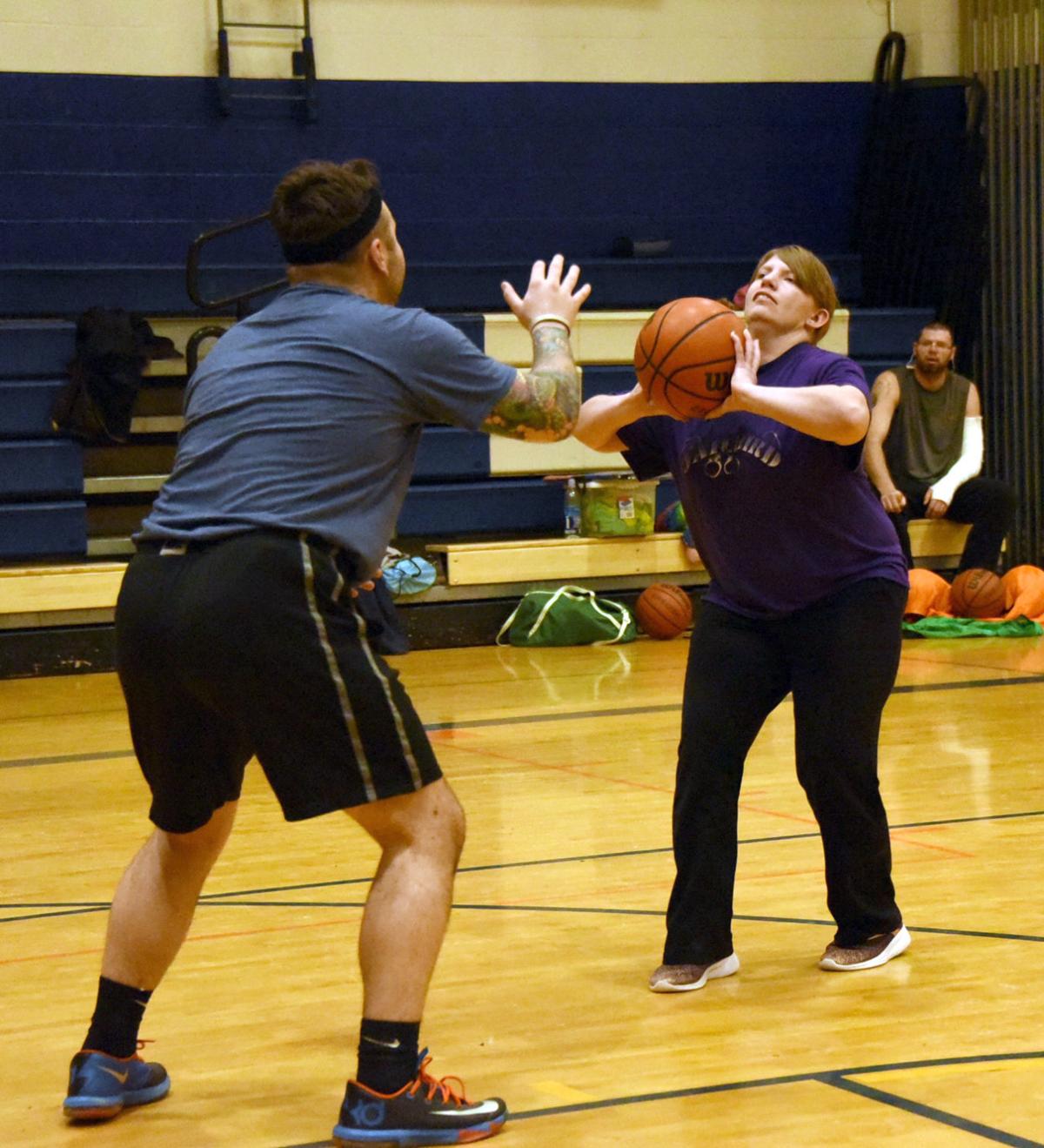 Special Olympic athlete GET NAME practices moving the ball downcourt against a Mansfield University student who is a volunteer coach.

A Special Olympian takes the shot while a Mansfield University student tries to block the ball.

Special Olympic athlete GET NAME practices moving the ball downcourt against a Mansfield University student who is a volunteer coach.

The gym at North Penn-Mansfield High School is a busy place this Sunday afternoon.

Athletes are working on skills in separate corners with the coaches. Some bounce a basketball off the floor into a taped square on the wall. Two other groups practice lay-up shots coming in from both sides of the basket.

It’s a typical afternoon for Tioga County Special Olympics as it prepares for another sporting event geared to people, age 8 and older, with intellectual disabilities.

Donna Cummings, county manager, said the 10-member committee will be celebrating its 35th year of providing athletic events for that population in a few years.

“A lot of us are there because we have someone we love with intellectual disabilities,” Cummings said. “There are other people who are there representing organizations that provide services to our athletes, and others who just want to help Special Olympics.”

Eunice Kennedy Shriver founded the Special Olympics in 1968. Shriver, who was the sister of President John F. Kennedy, was inspired by their sister, Rosemary, who was born with intellectual disabilities.

It began in 1990 when a group of special education teachers, and parents, organized a spring track and field event to offer their students an athletic event, said Cummings. Eventually, the group became more formalized and expanded its athletic offerings.

“Our biggest sporting competition is still the track and field event,” Cummings said. “We’ve held that for more than 30 years and drawn about 250 athletes.”

What it is able to offer depends on the volunteers available to coach the athletes.

“Many of our sports are lifetime sports, activities our people are able to do at any age,” Cummings said.

The sports training and competitions are free for the athletes. Special Olympics Tioga County spends about $30,000 annually to cover transportation to some practices, uniforms, medals and, for those athletes advancing in sectional and state competition, food, uniforms, transportation and housing costs.

Most of the money comes from fundraising through concessions at track and field, a 5K fundraiser and donations such as the United Way and United Fund. Special Olympics also receives grants from local foundations to cover costs of our sports programs.

The public schools, YMCA, and Mansfield University have generously provided facilities, Cummings said. Many university students also serve as coaches during training and competition or “buddies” at track and field event.

Having sporting events available for people with intellectual and physical disabilities enhances the quality of life for everyone in the area, Cummings said.

“My son lives for Special Olympics,” she explained. “We want to make sure it is there for him. It’s a very social event for the athletes. It also gets them out and gets them active.”

“Our goal is to grow the program. We would like to pull in younger athletes and more coaches,” Cummings added.

To become a coach, a person needs to express an interest and pass a background check, Cummings said. Tioga County Special Olympics will cover the cost of training.

Rain and snow this evening. The rain and snow will change to rain showers overnight. Low 33F. Winds S at 10 to 15 mph. Chance of precip 40%.