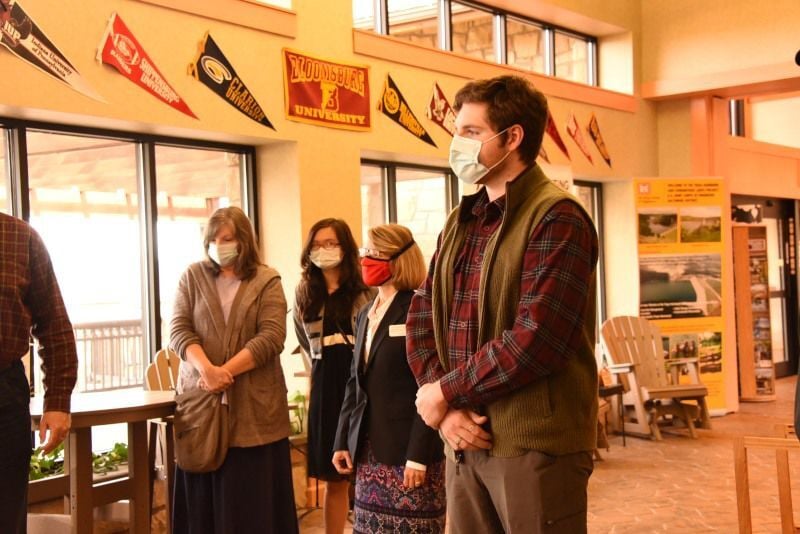 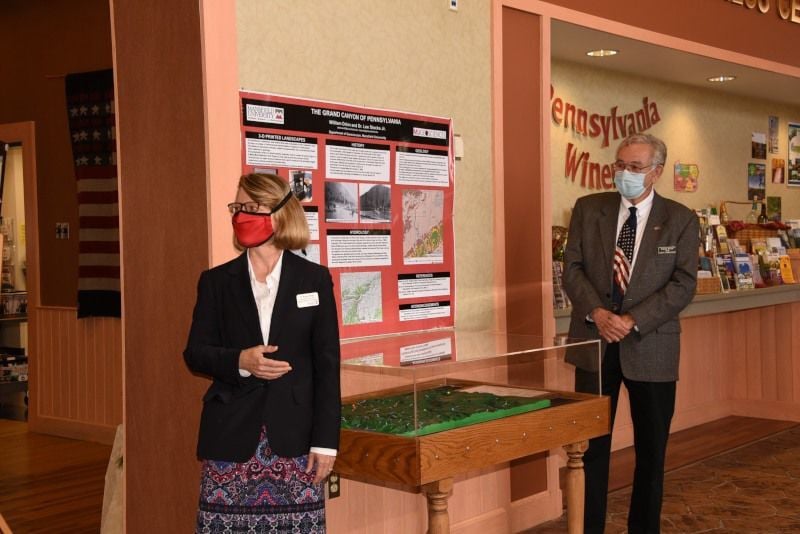 Dr. Kathy Wright and Tioga County Commissioner Roger Bunn stand beside the model in the Route 15 Welcome Center, where it will stay. 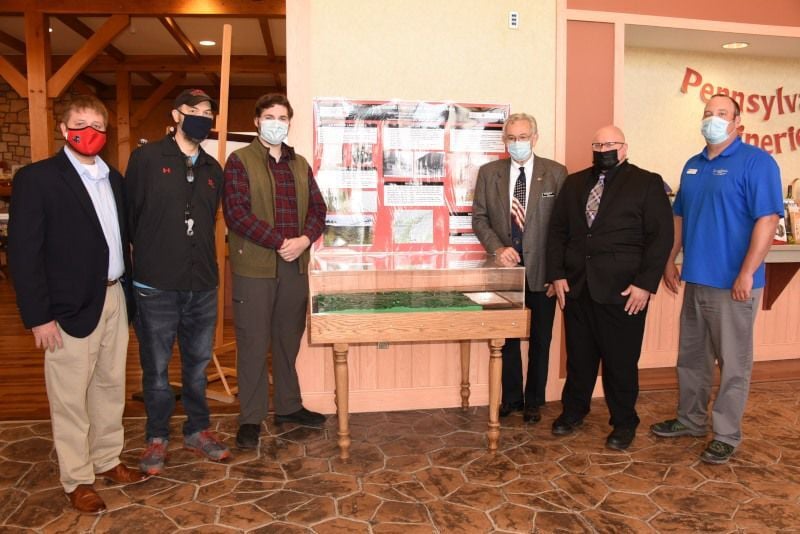 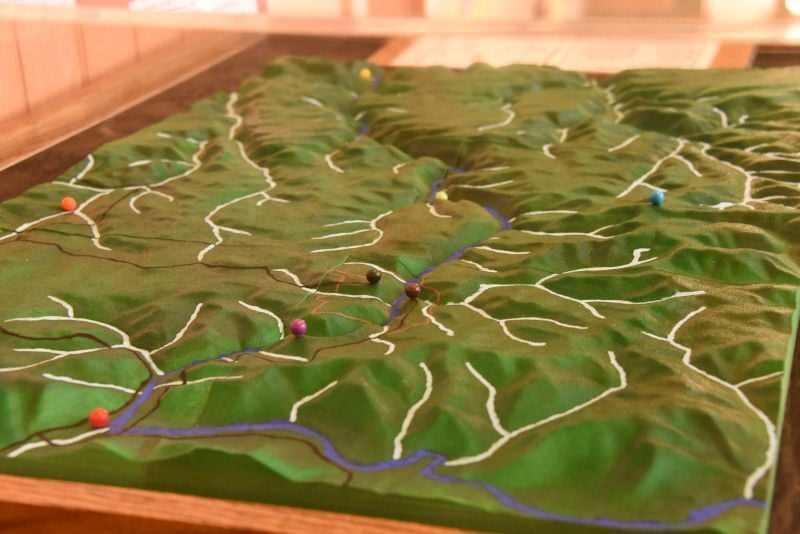 The model, taken through a plexiglass cover, shows the hydrology serving the canyon.

Dr. Kathy Wright and Tioga County Commissioner Roger Bunn stand beside the model in the Route 15 Welcome Center, where it will stay.

The model, taken through a plexiglass cover, shows the hydrology serving the canyon.

TIOGA — A model of the Pennsylvania Grand Canyon created by a 3D printer at Mansfield University is now on view for visitor at the welcome center on Route 15 south.

The model, made up of six 12-inch by 12-inch plates, was formally presented to Tioga County on Friday, Sept. 18. It was created using a Makerbot Z18 3D printer the county purchased for Mansfield University’s geosciences department.

Commissioners purchased the 3D printer in 2013, to give the university the ability to generate 3D terrain models to scale. At the time, it was one of the first 3D printers that a student could actually use, said Commissioner Roger Bunn. Unlike many 3D printers, it can print 12-inch by 12-inch by 18-inch tall models.

Students have used the equipment in class for the intervening seven years, said Dr. Lee Stocks.

“It has been a huge boon to classes,” Stocks said.

By creating models, students can put abstract concepts about terrain into models. For example, students placed water in a 3-D models to show where flooding would occur.

“We’re just kind of breaching the boundaries of what we can do with it,” Stocks said.

In return for the equipment, the university was to create something with the printer and give it to the county. Due to technology issues with the printer, the project went on the shelf until the summer 2019. That’s when William Dolan, a junior from Horseheads, N.Y., took it up as an independent study project.

“It’s wonderful to see it come to fruition all this time later,” Dolan said, who graduated this past May.

The first step was deciding what to create with the 3D printer. Dolan, Stocks and Scott Zubek, the county GPS director who served as advisor on the project, decided on the canyon because of its geological significance as well as being a major attraction. The model shows from Ansonia to Blackwell where glaciers dammed Pine Creek until the waters broke through, forging a dog-legged bend in the creek and rerouting the water to flow south.

There were many trials and errors along the way, Dolan said. They decided on a honeycomb structure to provide support, but not use excess materials. The vertical scale is exaggerated by two so that the differences in topography are more apparent.

After finding a program to convert data into information, printing began.

“It was almost like holding your breath until it finished printing,” Dolan said.

That’s because running out of material meant he had to start printing the entire plate again. So did power outages, and there were several of those. Each plate required 36-40 hours to print.

Once printing was completed, Dolan then had to sand and paint each plate. He painted waterways feeding into Pine Creek and located several landmarks on the model. He then assembled the final model, created an informational poster and built the wood and plexiglass case holding it.

“Will has developed the skills to be able to use this technology,” said Dr. Logan Wiest.

The university is continuing to find more uses for the printer, such as dinosaur egg replicas, complete with the embryonic dinosaur visible when the model is held to the light. The printer is also be used to create holiday ornaments.

“You can literally replicate anything with this,” Zubek said.

For information about the 3D printer, email Stocks at lstocks@mansfield.edu.

Rain showers early will evolve into a more steady rain for the afternoon. High near 55F. Winds S at 10 to 15 mph. Chance of rain 100%. Rainfall around a quarter of an inch.