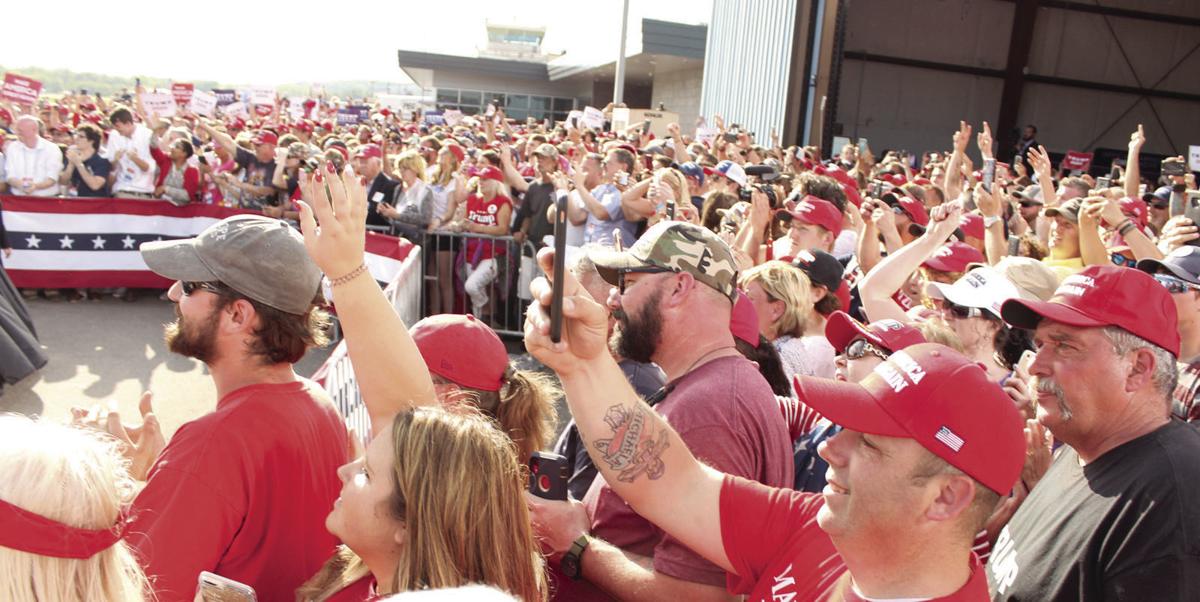 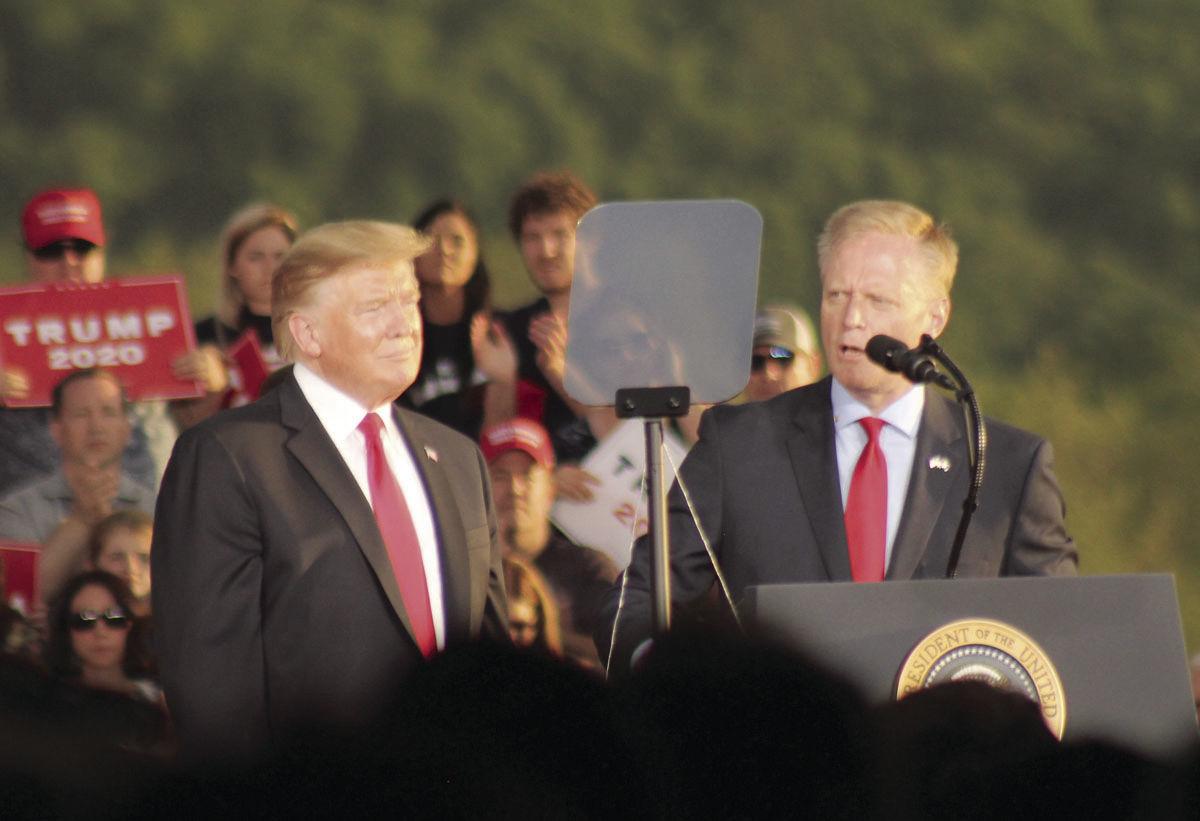 Fred Keller takes the stage with President Trump at Monday’s rally in Montoursville. 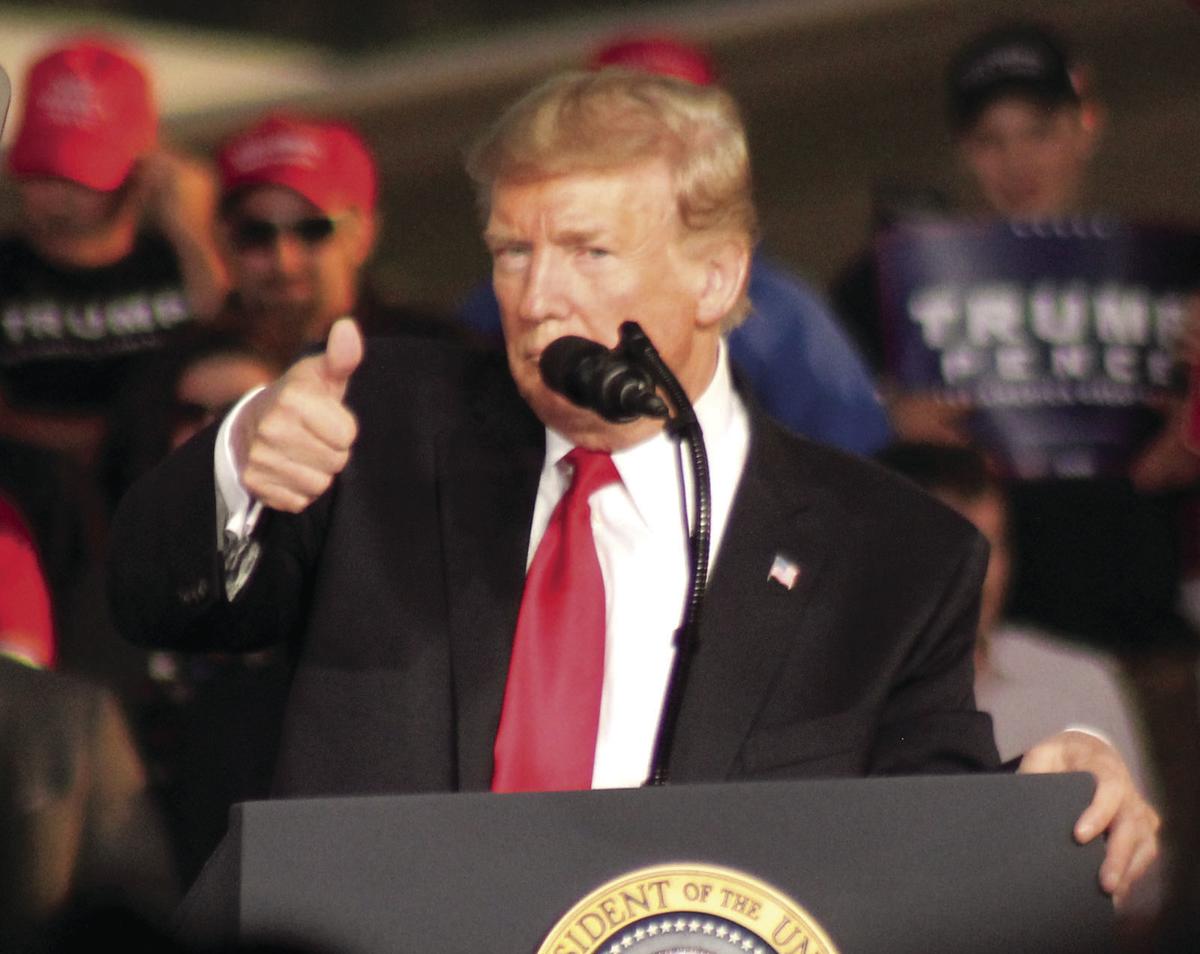 President Trump thanks the medical personnel after an an attendee collapsed during the rally.

Fred Keller takes the stage with President Trump at Monday’s rally in Montoursville.

President Trump thanks the medical personnel after an an attendee collapsed during the rally.

MONTOURSVILLE — Early estimates are that more than 15,000 people attended President Donald Trump’s rally in Montoursville Monday night where he voiced support for Fred Keller who was running for congress in Pennsylvania’s 12th Congressional District.

Although official figures have not been released, whether more or less than 15,000 attended, there were enough people at the Energy Aviation Hangar that many had to watch the rally on a giant monitor from the overflow space outside.

By noon, the line waiting to get in to the hangar snaked from the door through the aisles of long-term parking and onto the street. Ashley Foust and her friend Matthew had been in line since 10 a.m. Though they were closer than many, they were still far from the front of the line. Foust brought an umbrella to shield them from the sun, which was relentless. The temperature hovered around 80 degrees for much of the afternoon, which coupled with long hours standing on the blacktop may have contributed to the number of medical emergencies that took place during the rally.

On five occasions medics rushed into the crowd to help individuals who collapsed. When medical attention was necessary the crowd was quick to get Mr. Trump’s attention and make room for medical staff to work through the crowd.

Despite the heat and packed hangar, those waiting were excited for President Trump to stop in rural Pennsylvania.

“This is the first rally I have ever been to. I wanted the experience and I wanted my son, who is 15, to have the experience. No matter who the president is, we would have come to see since it’s in our area. It’s just neat to have this kind of exposure,” Brook Gordner said before the rally.

Gordner echoed the sentiments of many in attendance, including Shaun McCain from Rochester, N.Y., who was excited for the opportunity to see the president in person.

“I think it’s great that a president came here. I don’t anticipate him coming up to Rochester until the campaign really kicks in,” McCain said.

According to National Press Secretary Kayleigh McEnany, making stops in rural America is a priority for the president.

“There is no doubt that rural communities are incredibly important to the president. We see in that makes a huge chunk of his base. There is no doubt about it here in Pennsylvania rural communities put him over the top,” said McEnany before Trump took the stage. “There is a contrast between the D.C. swamp and the heartland. It’s the hardworking men and women across rural America that make up the backbone of this presidency.”

There is an enormous amount of planning and coordination that goes into each event the president holds.

The amount of staff that goes into an event of this magnitude is difficult to comprehend, be it the local and state police, the Secret Service personnel, medical staff, shuttle and bus drivers who brought attendees to and from the hangar, organizers who set up the stage and banners, to the crane operators on the other side of town that hoisted the giant American flag.

The arrival of the president becomes an event for the whole town whether you are a supporter or not. Roads are sectioned off. Vendors set up shop near the hangar and down the nearby streets. American flags and Trump banners pop up all over town. The town of less than 5,000 residents suddenly played host to more than 10,000 Trump supporters.

When the president comes to town, everything goes on hold. As President Trump said during his speech, “Normally, I could do other things tonight. But, I figured hey, it’s a Monday, we have an election tomorrow. Who the hell wants to sit around doing nothing on Monday night?”

Greater Hazleton Can Be