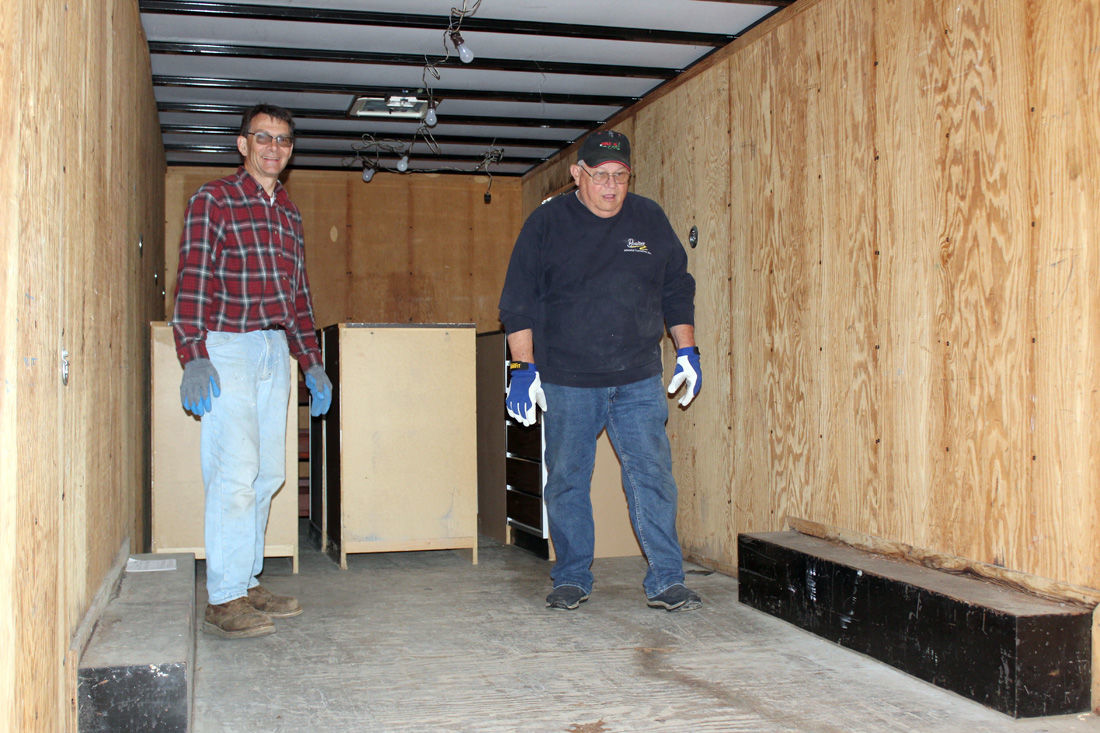 Volunteers wait for the next load of dressers on one of the trailers. 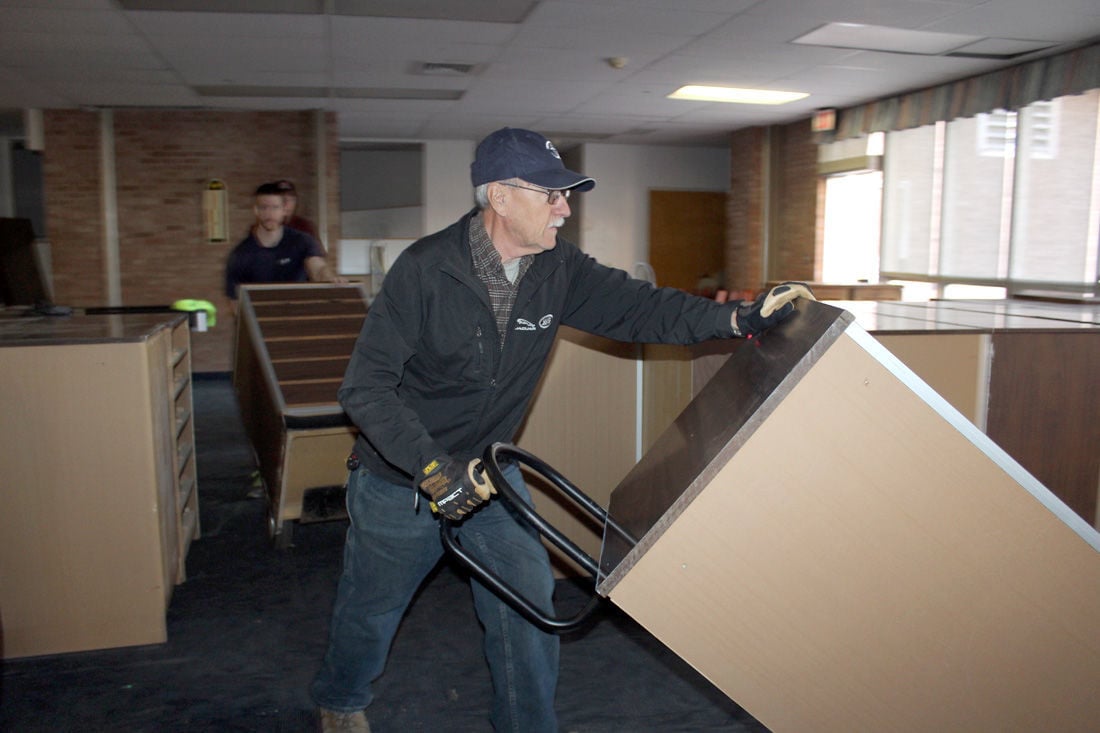 Bud Voorhees pushes a dresser for loading and transporting from Mansfield University to another area. 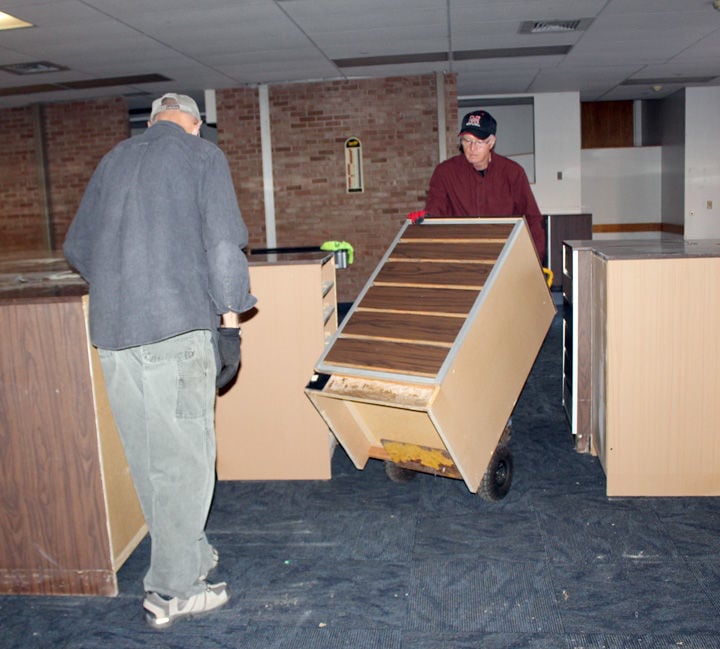 Volunteer Ron Butler pushes a dresser toward the trailer to transport it to a storage area for Seeds of Hope. 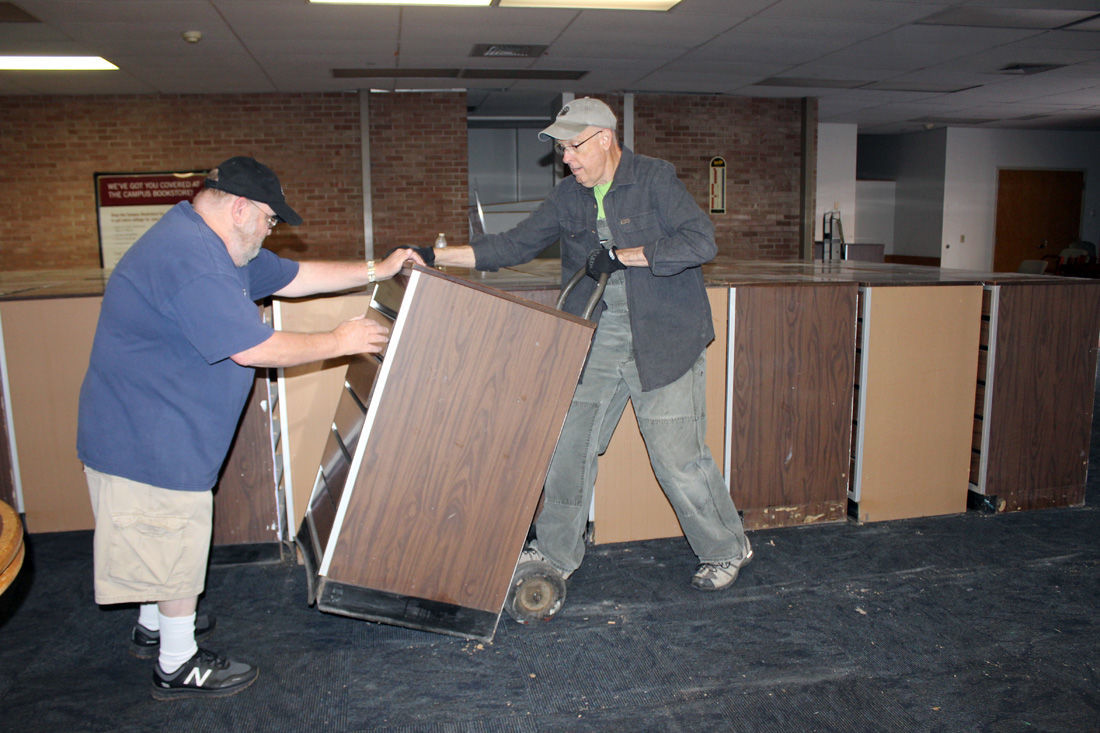 Volunteers Kim Hawk (left) and Tom Kaminski prepare to load a dresser onto a trailer from the Laurel dormitory. 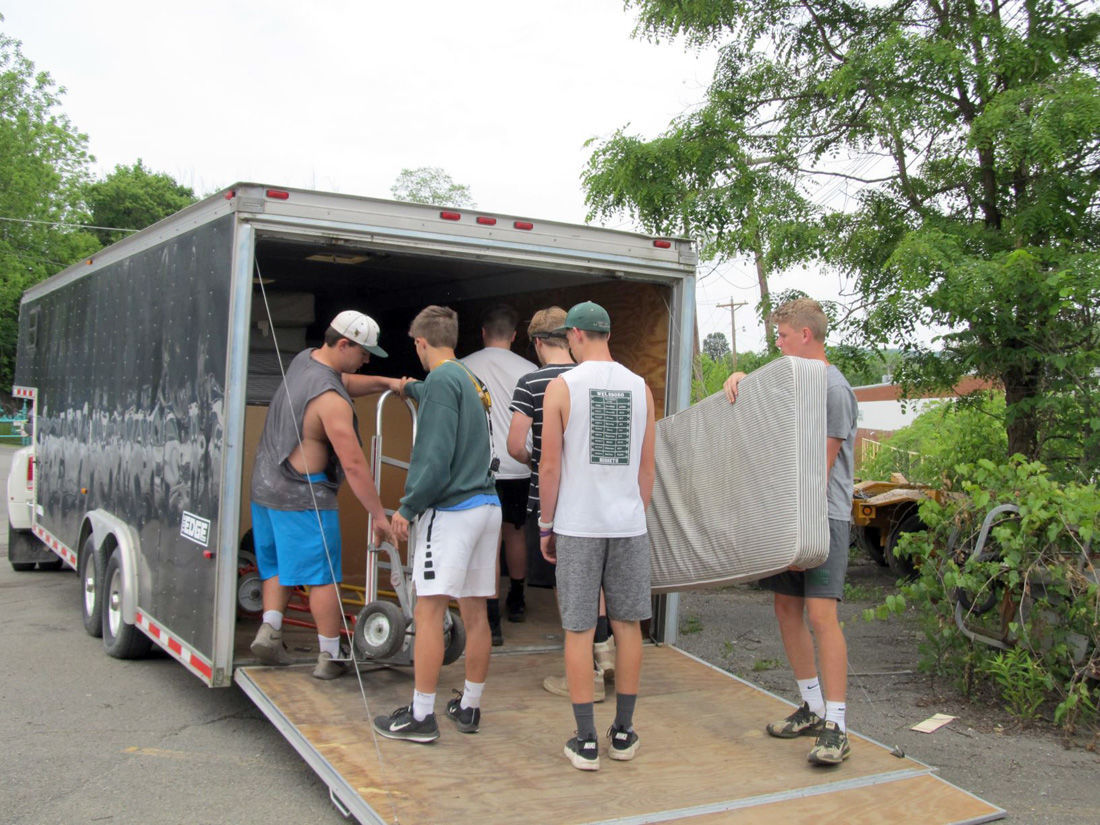 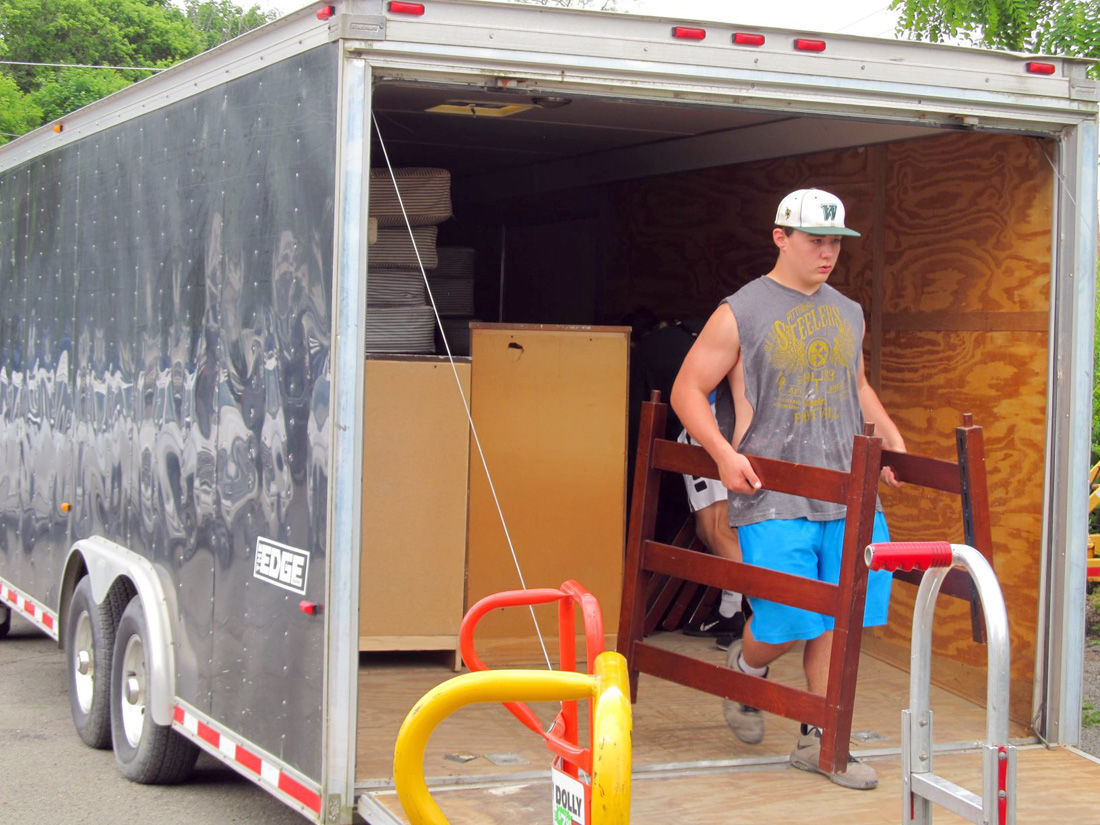 A Wellsboro High School student volunteer unloads furniture from the trailer at the former Borden’s plant in Wellsboro. 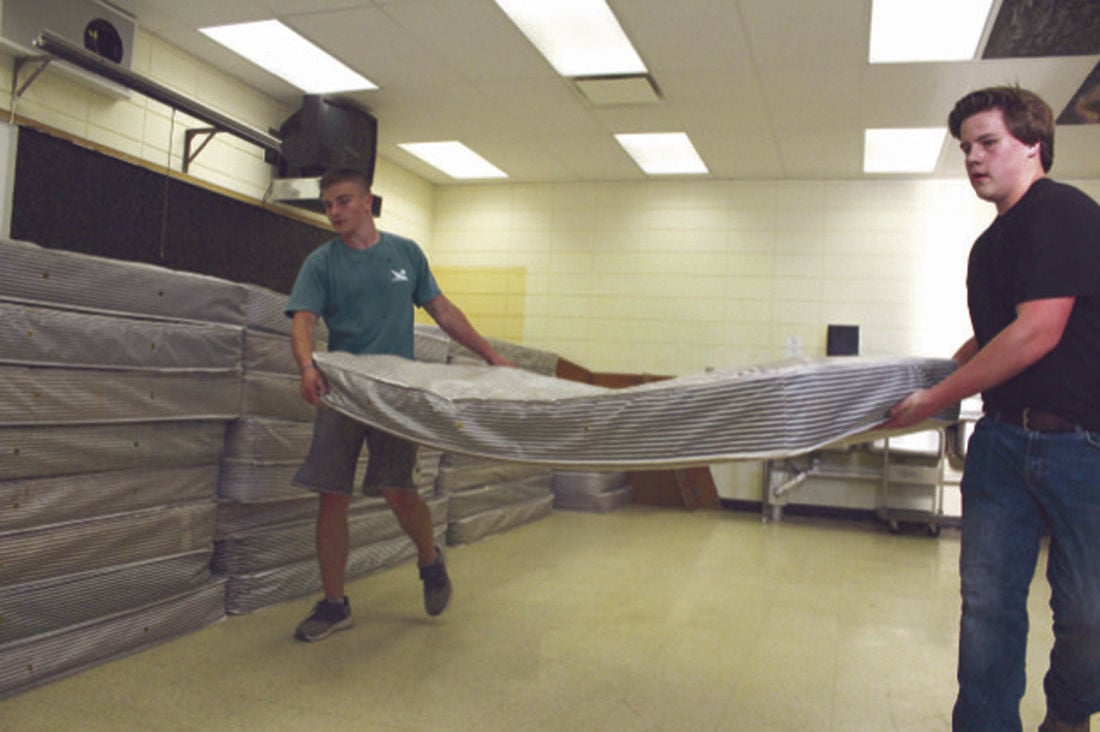 Volunteers wait for the next load of dressers on one of the trailers.

Bud Voorhees pushes a dresser for loading and transporting from Mansfield University to another area.

Volunteer Ron Butler pushes a dresser toward the trailer to transport it to a storage area for Seeds of Hope.

Volunteers Kim Hawk (left) and Tom Kaminski prepare to load a dresser onto a trailer from the Laurel dormitory.

A Wellsboro High School student volunteer unloads furniture from the trailer at the former Borden’s plant in Wellsboro.

MANSFIELD — Seeds of Hope will be able to provide beds for children and families in crisis for the next three years, thanks to a donation from Mansfield University.

Last week, June 4 and 5, volunteers with Seeds of Hope loaded the beds and dressers from three Mansfield University dormitories slated for demolition, transported the furniture to a location in each school district.

It was a project several months in the planning. It began when Jim Welch, health and safety officer at the university, told members of the Mansfield Hose Company, where he is chief, about the beds.

“With the demolition, I reached out in different areas trying to find anyone who would be interested,” said Welch. “It’s tough to sell commercial-style bunk beds. As it turned out, one evening at the Fire Department monthly meeting, I made reference if anyone knew of anyone in need of any beds to let me know. Sure enough, in the audience and in attendance was someone related to folks who are prime mover of Seeds of Hope.”

Seeds of Hope is a ministry of area churches and individuals working in partnership with the Tioga County Department of Human Services to help families in crisis meet basic needs to maintain and reunify families. The ministry provides home repairs, diapers, clothing, hygiene items and food, transportation to medical and other appointments. A major priority is providing beds and bedding for children.

In the audience was 42-year fire company member Ron Gordon, who is the brother-in-law of Seeds of Hope co-founder Carl Matteson.

“Whenever I hear of something available that I think Carl would need, I give him a call,” said Gordon. “Next day I made the call. I figured that he’d want to jump right on it.”

Welch and Matteson talked, scouted the dormitories — one seven stories tall — and figured out how to transport as many of the 500 available beds and dressers as possible.

“I didn’t know about the organization until he contacted me and I didn’t know the good they were doing,” said Welch. “We’d much rather them go to a good cause than go down with building as part of the demolition process. The last thing we want is sending more material to a landfill.”

Northern Tioga and Southern Tioga school districts offered space to store a portion of the beds and dressers; a Wellsboro man offered storage space in the former Borden’s plant in Wellsboro. Those three sites will put the furniture in locations accessible to families in all areas of the county.

“I am thrilled. I am absolutely thrilled that the beds are here. We are very aware that there are children in our district that don’t have a bed to sleep on or that event could come to pass,” said NTSD superintendent Diana Barnes. “If there is a way that we can help, by all means. I am blessed with incredibly good staff who have hearts that go way above the call of duty. There is just such a collective effort of how do we help children.”

Volunteers brought furniture from the dormitory rooms to the lowest level in two of the dorms, even though the elevator stopped working in Laurel Manor. Box springs leaned against the foyer wall, headboards and footboards filled an empty office, mattresses were stacked in piles in the hallway.

The volunteers, including a court-ordered community service crew, loaded each trailer in about 45 minutes, fitting the contents into place like a giant game of Tetrus. First on went 80 headboards and footboards, followed by 80 dressers. Mattresses and box springs traveled in separate trailers to the storage sites, where high school student volunteers unloaded and restacked the items.

Other volunteers provided lunch and snacks for the workers, while the truck drivers gave of their time and equipment, said Matteson. Volunteers said they helped because of the good the beds will do. Seeds of Hope distributes about 120 beds annually.

“There are a lot of families who, for one reason or another, split up and the kids need to go to different locations,” said volunteer Tom Kaminski. “This furniture will be available to allow family members to take kids in who would otherwise have to go into foster care.”

About 340 beds and 340 dressers were moved last week, said Matteson. As furniture is distributed, Seeds of Hope will restock the storage areas with additional beds and dressers from the university until demolition begins.

“We no longer have to struggle to find resources of beds and dressers for some time now,” said Matteson. “Which, I hope, means can expand into other areas because we don’t have to expend time and money to go out and find beds.

“It’s a really good feeling to know you have the resources there when a family needs them,” he added. “They all came together and did some good stuff.”

Some sun in the morning with increasing clouds during the afternoon. High 59F. Winds NNW at 10 to 15 mph.