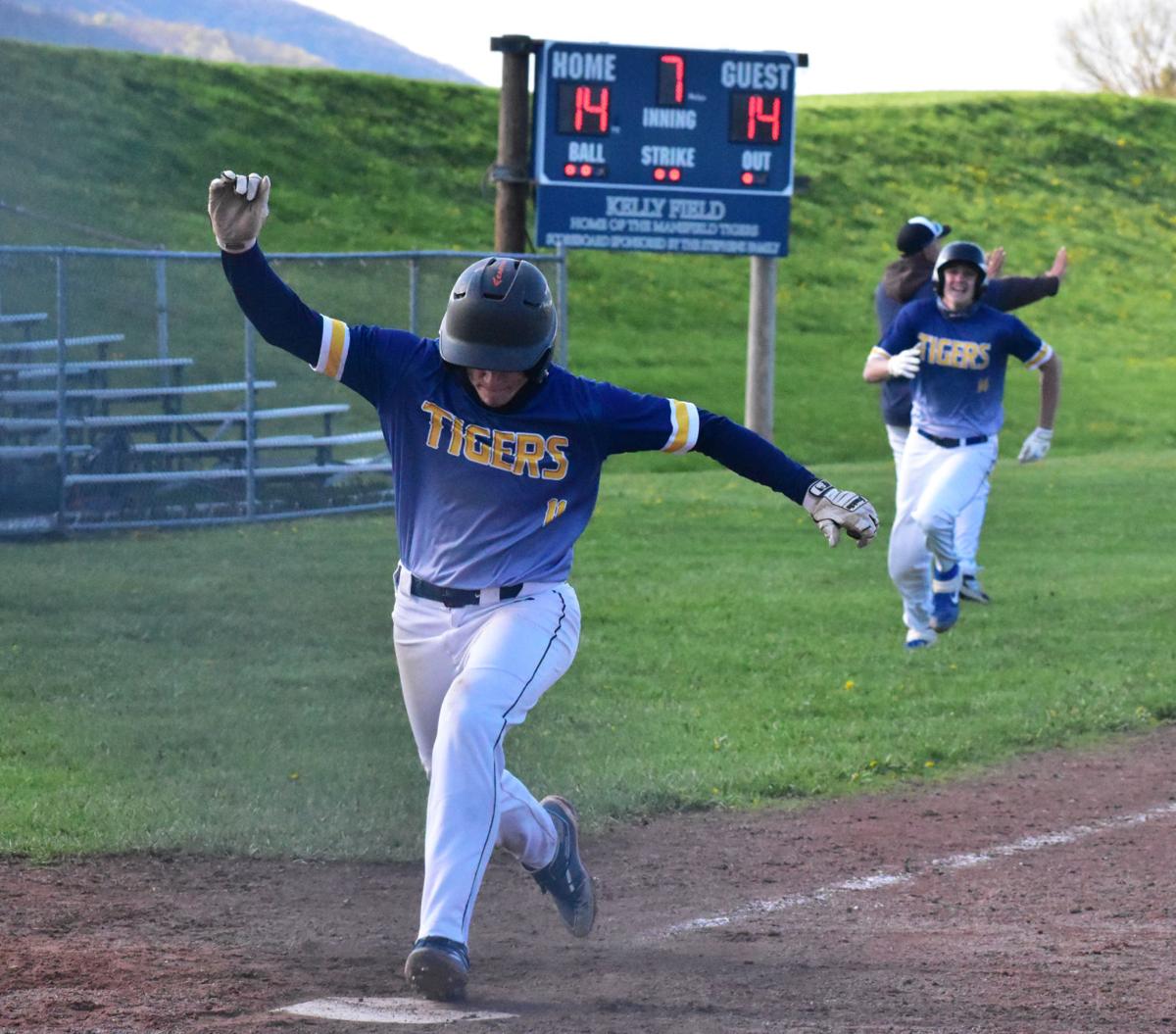 NP-Mansfield senior Jake Evans crosses the plate for the winning run over Wyalusing in the first half of a double-header on Friday, April 30. 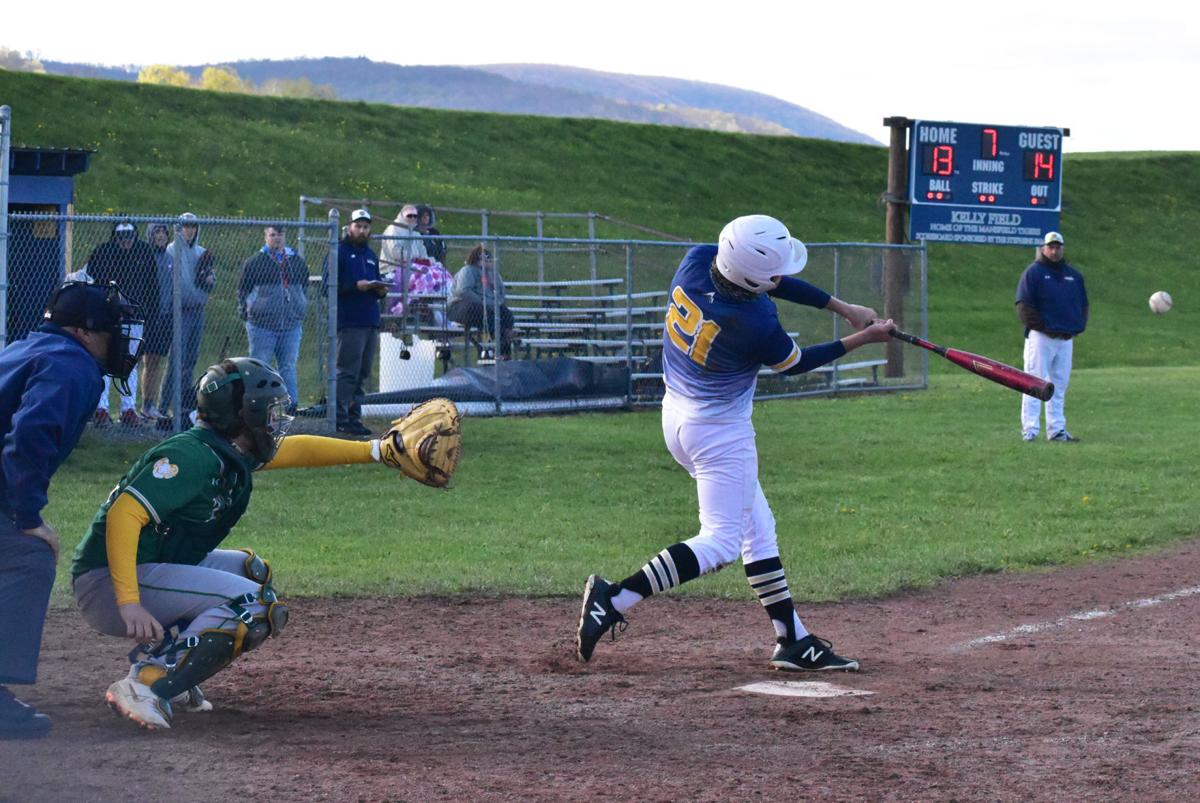 NP-Mansfield senior Jake Evans crosses the plate for the winning run over Wyalusing in the first half of a double-header on Friday, April 30.

MANSFIELD — The North Penn-Mansfield Tigers (8-5-1) baseball team pulled off another walk-off win at Smythe Park in the first half of their double-header against Wyalusing Rams (5-5) on Friday, April 30, with Bryan Bogaczyk hitting a double in the bottom of the seventh inning to win by a score of 15-14.

“It feels pretty good,” Bogaczyk said. “We’ve been putting in a lot of work in the spring, going down to Elmira and hitting there every weekend and coming to practice like 30 minutes to an hour earlier to get in some swings, so it just felt good.”

Mansfield also pulled off a win in their second contest, without as much theatrics, in a 5-2 victory headlined by senior Jake Evans putting together a six-inning two-hitter for the Tigers to sweep the day.

In their first game, Mansfield saw Wyalusing pitching ace Blake Morningstar for the first time this season, but used aggressive batting and the poor weather conditions to force him to battle with every batter and rack up a pitch count of 76 in his few innings of work.

Though he pitched well, his defense was unable to handle many routine balls behind him, mostly in part to the increasingly volatile weather, and Mansfield got out to a 5-1 lead during his time on the mound.

“I thought we did awesome to start against Morningstar,” NP-Mansfield Head Coach Rob Davis said. “He’s one of the top couple pitchers in the league, we battled him and we had a good approach for him. Getting him out of there up 5-1, I thought we were sitting pretty good.”

It looked as though Mansfield would run away with the game, and a home run by Logyn Choplosky that drove in three runs in the bottom of the sixth inning seemed to be the final nail in the coffin, but things heated up in the final frame.

“Our team is winning but I haven’t been producing as well as I would like for the team,” Choplosky said. “But I’m getting there. It’s nice to go out there and do what my team expects me to do, it just feels nice.”

After a slow start to the year, Choplosky came alive during the past week, hitting two of his four home runs on the season and batting 1-3 with three RBIs against the Rams.

Despite Mansfield building a 12-5 lead, the Rams would plate an incredible nine runs in the top of the seventh between a combo of solid hitting and Mansfield errors that lifted them to a 14-12 lead with only the bottom of the seventh left to play.

After Blaze Deitrick was hit by a pitch, he used some Wyalusing errors to score and set the stage for Bogaczyk at the plate with Evans and Derek Litzelman on base with a chance to end the game.

He was able to connect on a nice shot in the gap for a double that sent home the winning runners and gave Mansfield a big walk-off win against a strong Wyalusing team.

“When I fell down in the count to two and two, I was like I just got to make contact,” Bogaczyk said. “I kind of closed my eyes right before I hit it, and I looked up and the ball was in the gap and it was a good hit.”

Mansfield used eight hits to score 15 runs, and the eight errors by Wyalusing proved to be the tipping point as the Tigers took advantage of nearly every one of those mistakes.

At the plate, Litzelman continued to swing the bat well and went 2-4 on the day with an RBI and in just two at-bats, forced Morningstar to throw 24 pitches to eat up his pitch-count.

He also scored one of the two runs in the bottom of the seventh inning that lifted the Tigers to a win.

“He’s one of the best pitchers around, we came in here with the idea that we were going to not take a ton of pitches but we were going to attack the baseball and try and get his pitch count up early,” Davis said. ”I think the weather played into that and helped. It was windy and raining and he was struggling to throw strikes in those first two innings and the guys bought into it and did well taking pitches.”

The hero of the game, Bogaczyk had a solid day at the plate going 2-5 with three runs scored and three RBIs.

Evans and Deitrick were able to score two runs each as well to help the Tigers capture a win.

In their next contest, the weather cleared up a bit and Mansfield was able to carry their momentum over and pick up a 5-2 win behind a six-inning two-hitter from Evans.

The offense was led by Litzelman who ended the day 2-4 with one run scored, Rhyen Wilson who knocked in two RBIs and Deitrick, Harvey and Bogaczyk who each added an RBI in the win.

Mansfield got out to a 3-0 lead in the third inning and took both games in the double-header to propel them from third to second place in the NTL Large School Division, just one game behind their rival Wellsboro Hornets.

They faced off with the Hornets in their latest contest, and fell in a tight game 5-3 to their rivals on Monday. May 3.

A mix of clouds and sun early followed by cloudy skies this afternoon. High 68F. Winds W at 5 to 10 mph.

Considerable cloudiness. Occasional rain showers in the afternoon. High near 65F. Winds SSW at 5 to 10 mph. Chance of rain 40%.