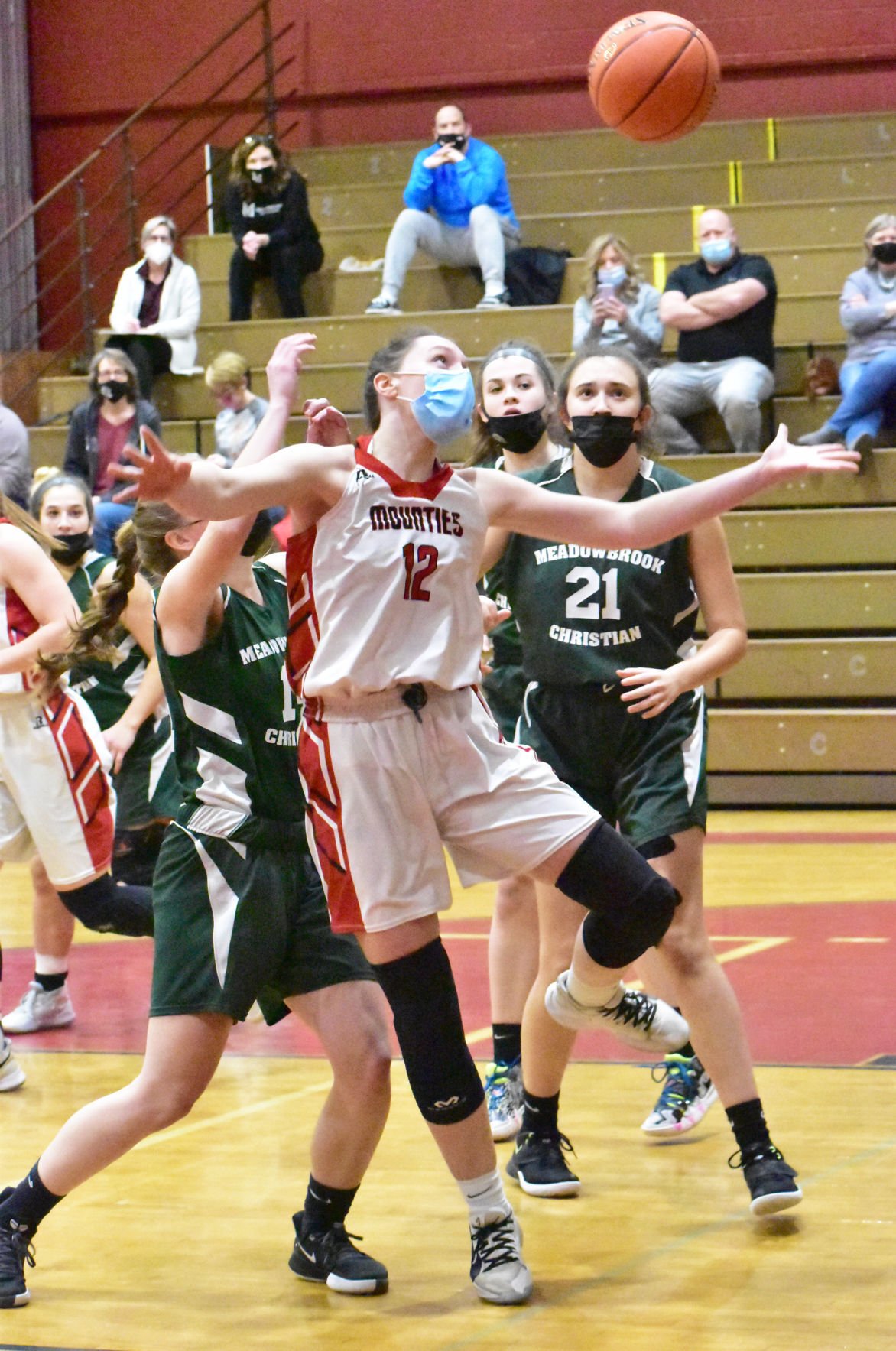 Sophomore NP-Liberty player Elizabeth Ritchie boxes out for one of her game-high 16 rebounds in the Lady Mounties win over Meadowbrook on Wednesday, March 3. 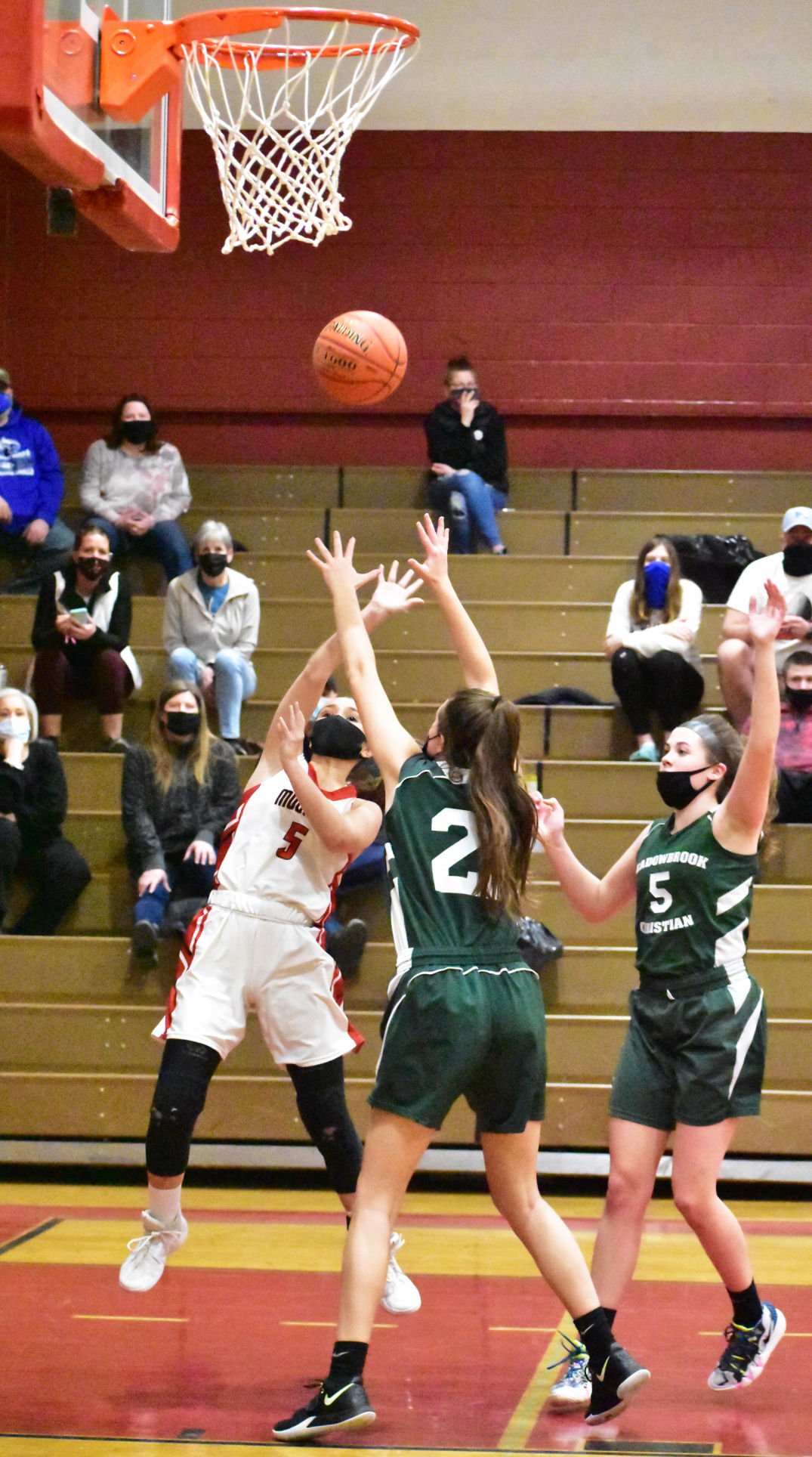 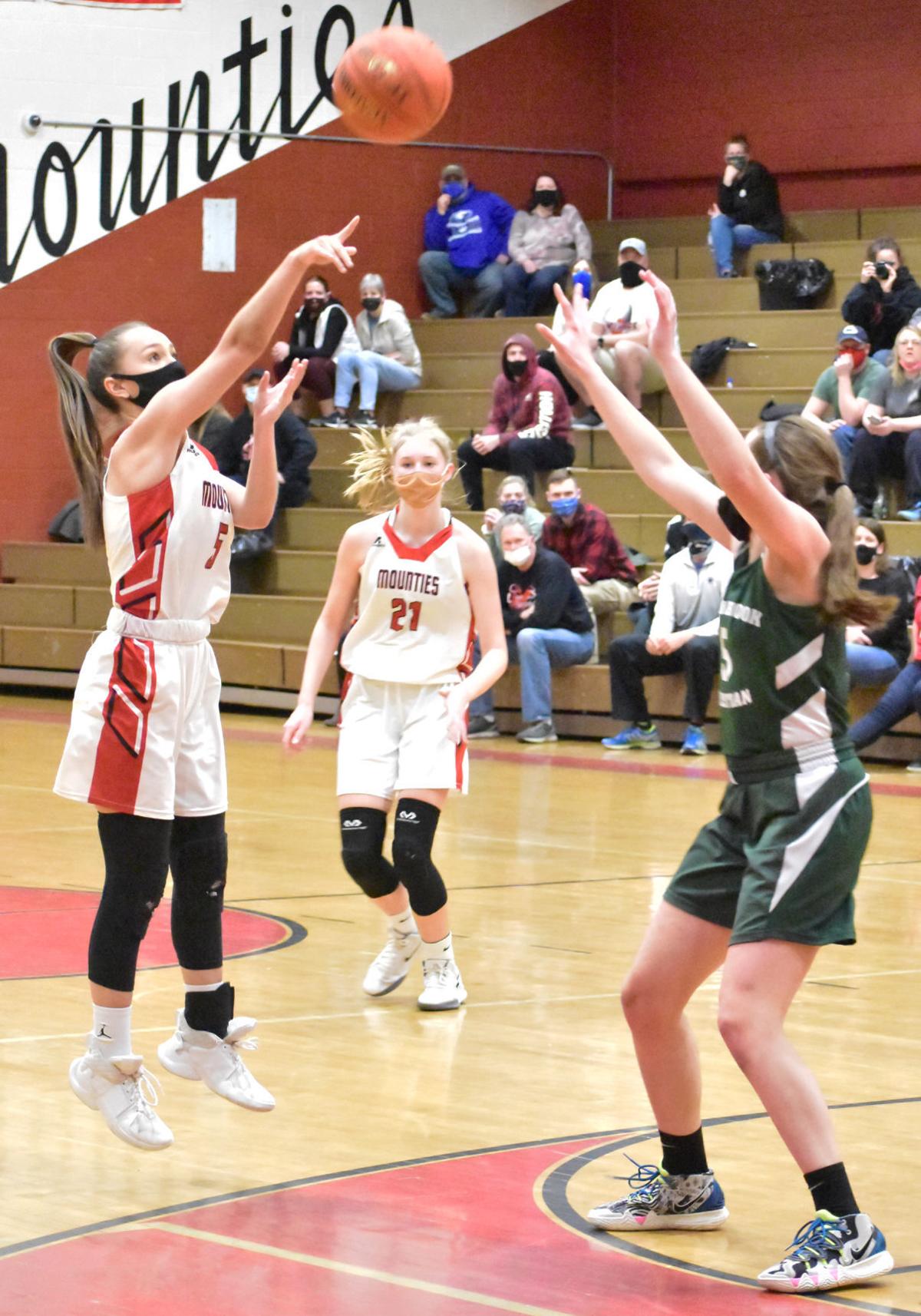 NP-Liberty’s Eva Rice shoots a three-pointer during their win over Meadowbrook Christian on Wednesday, March 3.

Sophomore NP-Liberty player Elizabeth Ritchie boxes out for one of her game-high 16 rebounds in the Lady Mounties win over Meadowbrook on Wednesday, March 3.

NP-Liberty’s Eva Rice shoots a three-pointer during their win over Meadowbrook Christian on Wednesday, March 3.

LIBERTY -- The North Penn-Liberty Lady Mounties (7-9) picked up their second District 4 A Playoff win in school history on Wednesday, March 3 as they outlasted the Meadowbrook Christian Lady Lions (8-10) on their home floor, 34-30.

“This is the best win since we finished last season,” NP-Liberty Head Coach Tracy Gregory said. “It’s probably one of the best wins I’ve ever been a part of. It is just great for these girls because for the last couple of years we’ve only won a couple of games each year.”

In a defensive battle to move forward in the playoffs, Liberty was able to grind out the win in large part due to the play of sophomore Elizabeth Ritchie.

Ritchie was extremely aggressive on the glass, grabbing a game-high 16 rebounds on the night, and was a difference-maker on the defensive side of the ball as well.

“I just try to work my hardest,” Ritchie said. “You have to get off your feet and work as a team and you just have to go out there and get the ball.”

During the opening minutes of the contest, the Lady Mounties came out of the gates on fire.

Senior captain Eva Rice found a groove early as she knocked down two early three-pointers that gave her team an advantage in the first quarter.

She scored a total of eight points in the quarter, and a mid-range shot by Sidney Landis as time ticked down in the first pushed the Lady Mounties’ lead to 12-8.

The game slowed down immensely in the second quarter and Meadowbrook started to climb back into contention and cut the score to 12-11 before the Liberty girls responded.

The Lady Mounties then went on a 7-2 run to end the half including yet another buzzer-beater shot, this time from Ritchie, that pushed their lead 19-13 and in complete control.

The Meadowbrook team came out of the locker room with a new mentality in the ensuing quarter, using full-court pressure to hold the Liberty girls to just two points in the third quarter.

The Lady Lions tied the game for the first time in the second half during the stretch, but a late shot by Rice pushed the score to 21-19 heading into the final quarter.

A back-and-forth final period saw the Meadowbrook team tie the game at 28 apiece with only 2:30 left on the clock, but the Liberty girls did an excellent job from the free-throw line, shooting 6-7 in the final two minutes of play, to close the game out on a 6-2 run and win their first postseason contest since the 2015-16 season.

Rice scored a game-high 16 points (10 in the first half) and was extremely poised down the stretch going at Meadowbrook's best defender/scorer in Kailey Devlin in the fourth quarter and forcing her to foul out.

“If I am having a good game, it just kind of gives me confidence,” Rice said about pressuring the Meadowbrook teams’ best defender. “So that helped me and that’s where I was at.”

Ritchie scored six points to go along with her game-high 16 rebounds and played incredibly well in a big game for the Liberty team.

“You just have to hustle,” Ritchie said. “You have to know what you can do and you have to push yourself every day at practice. I have to know that I can make the shots that I need to make.”

Upham also added two big plays down the stretch where she forced a turnover on defense and subsequently got herself to the line on the next offensive possession to knock down two big free throws that iced the game for Liberty.

“It was a great team win,” Gregory said. “I told Ryann (Upham) I may have only seen you play the last couple of years, but they’re probably the biggest free throws you have ever made. That was great to see. She's been playing great these last three weeks.”

Meadowbrook was led by sophomore Alyssa Camelo, who scored a team-high 12 points, Devlin, who scored eight, and also Shelby Hartman and Audrey Millet, who both tallied four points in the loss for the Lady Lions.

With the win, the Liberty girls now move on in the District 4 A playoffs against the number one-seeded Northumberland Christian (18-3) who are coming off a complete dismantling of Juniata Christian by a score of 56-12.

“If we play like we did tonight, we should definitely put on a show,” Rice said.

The two teams are set to meet on Saturday, March 6 at 1 p.m. on Northumberland Christian’s home floor.