The North Penn-Liberty boys basketball team claimed their second consecutive NTL-Title on Thursday, Feb. 25 as they beat the Wyalusing Rams 65-52. 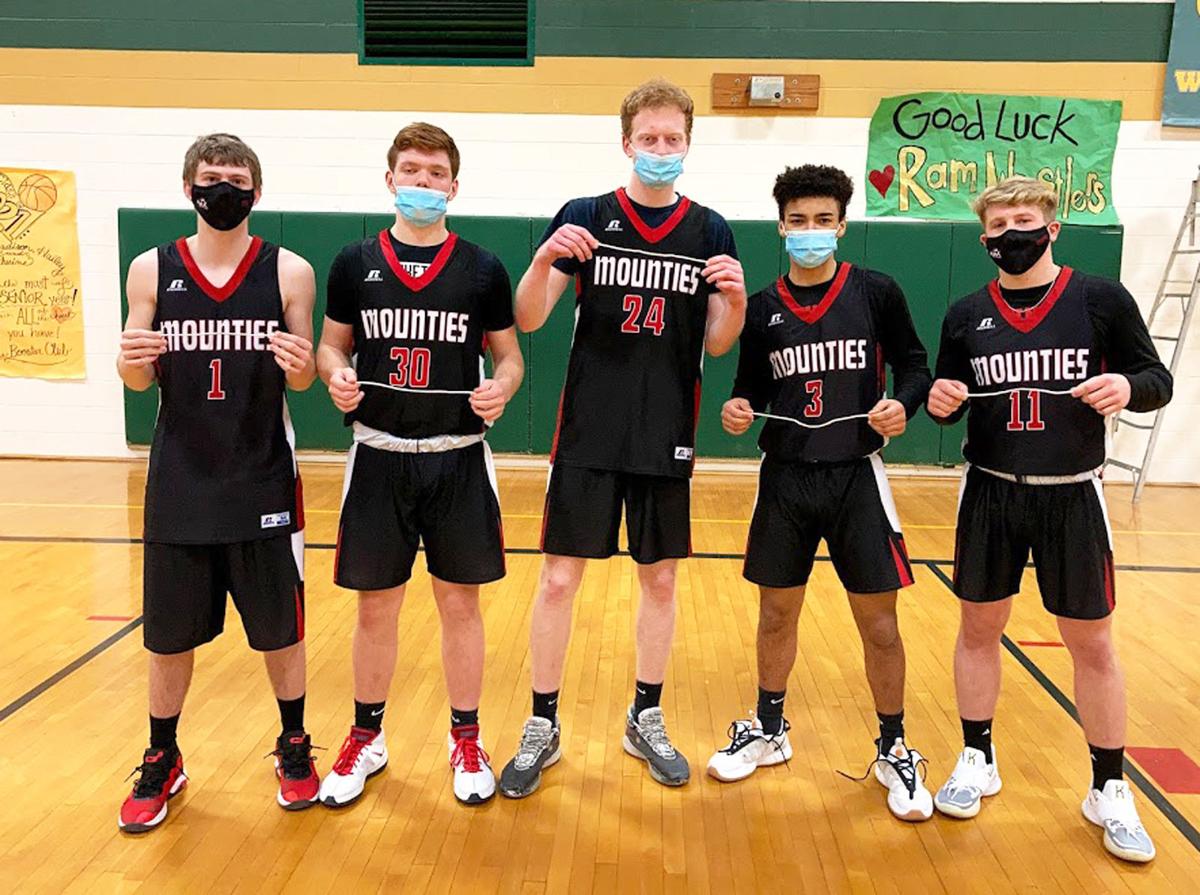 The North Penn-Liberty Mounties senior class displays their pieces of the net after beating Wyalusing on Thursday, Feb. 25 to claim their second straight NTL Title.

The North Penn-Liberty boys basketball team claimed their second consecutive NTL-Title on Thursday, Feb. 25 as they beat the Wyalusing Rams 65-52.

The North Penn-Liberty Mounties senior class displays their pieces of the net after beating Wyalusing on Thursday, Feb. 25 to claim their second straight NTL Title.

After an almost 30-year drought of capturing a Northern Tier League Title, the North Penn-Liberty Mounties (12-2) capped off their second-straight title season as they roared back in the second half on the road to take down the Wyalusing Rams, 65-52 on Thursday, Feb. 25.

With a roster laden with senior talent and leadership, the Liberty boys entered rarified territory in school history becoming the first team to ever repeat as league champions and have supplanted themselves as one of - if not the - best team to ever hit the hardwood in a Liberty uniform.

“I might be a little prejudiced, but I really think this is the best team that has ever come through this school,” Head Coach Brian Litzelman said. “And the word team is super important because everyone knows their roles and does them well and never complains about not scoring or playing time. They all work super together knowing that's the way they win.”

During the contest, the Mounties one again fell behind as their opponent came out on fire in the first quarter, with the Rams connecting on five first quarter triples and scored 27 points as they built a 27-14 lead.

“We talked last night that being able to take a team's best punch and fight through it will only help us down the road in the playoffs,” Litzelman said. “I think it shows that the boys are mentally tough and do believe that they are truly never out of a game. It was one possession at a time and then one quarter at a time to get back the lead.”

The Mounties defense settled in the second quarter and started to take control of the game, as they only allowed six points in the frame on just two made field goals and closed the gap to 33-26 heading into the half.

The Mounties offense found their rhythm in the second half and dominated on both sides of the ball.

The Liberty team outscored the Rams 39-19 on their way to victory with senior Noah Spencer going bonkers, scoring 22 second-half points and leading his team to their 12th win of the season.

The defense was also incredible in the second half and only allowed six field goals in two quarters to grab the win.

“I think all the struggles from last year have led them to better determination in games, especially in close games at crunch time,” Litzelman said. “I believe they know they can win the tough ones this year. This determination will help us as playoffs start, they just don't want their season to end and have a big desire to do better in this playoffs year.”

The senior class poetically came up big in the win, as the five seniors on the roster scored all 65 points in the win.

Spencer was once again incredible in the win, and after being held to under 20 points in two consecutive contests, scored a game high 26 points to go along with nine rebounds and seven assists.

The senior has been incredible so far this year averaging 21 points, six rebounds and five assists per game.

Spencer deserves major consideration as this year’s NTL Player of the Year for his all-around game in the 2021 season.

Senior Brandon Thompson also turned in a strong night with 22 points, seven rebounds and two blocks in the win and used his size to carve out another big night against the Rams.

Colton Litzelman did a bit of everything with eight points, three boards, four assists and one block and Koleton Roupp added seven points and Kevin Alexander chipped in two points, six boards and one assist.

As the season winds down, the Liberty boys host one more contest on Saturday, Feb. 27 against the Canton Warriors (9-8) who pushed the Mounties to the brink earlier this week in a 60-54 battle.

After their contest against Canton, there is a large possibility they will have a layoff of five days or more before their first playoff game, which proved to hurt them in their District run last season.

“I am hoping that we have an opening round game, I think the long lay-off hurt us last year. I am looking at a possible scrimmage to also keep us sharp,” Lizelman said. “It's hard to duplicate the game in practice, but I think we need to continue to push the players every day and don't let up. Keep them as sharp as we can to change our bad showing last year into a good showing this year.”

The Mounties currently sit as the two seed in the District 4 A bracket, but if they win their game against Canton and the number one-seeded St. John Neumann drops one of their final two games, they could finish the regular season atop the standings and possibly a first-round bye.

Rain and snow showers this morning. The rain and snow will change to rain showers for the afternoon hours. High 44F. Winds WNW at 10 to 20 mph. Chance of rain 70%.