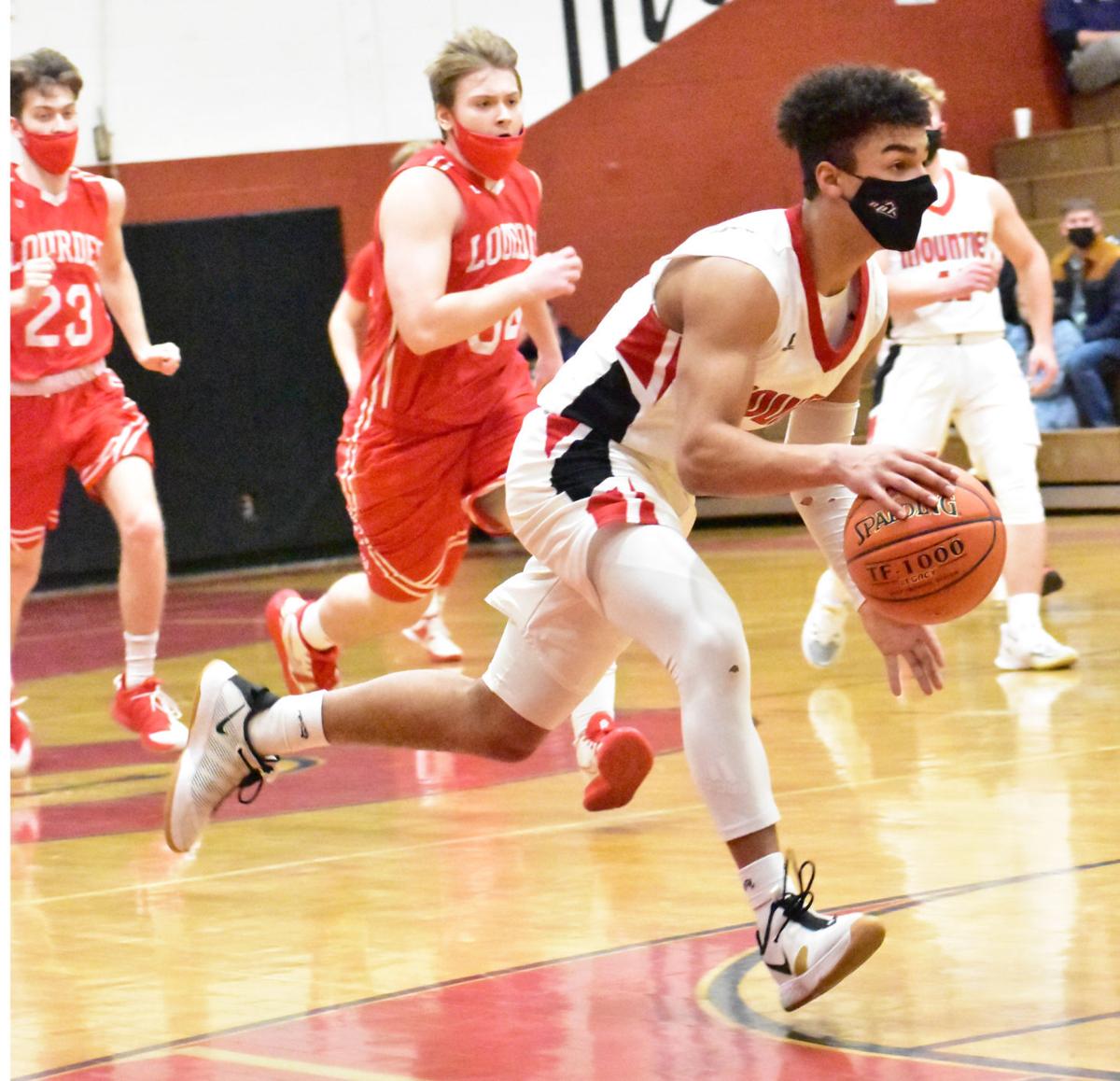 Noah Spencer leads the fast break during the Mounties win over Lourdes Regional on Saturday, March 6. 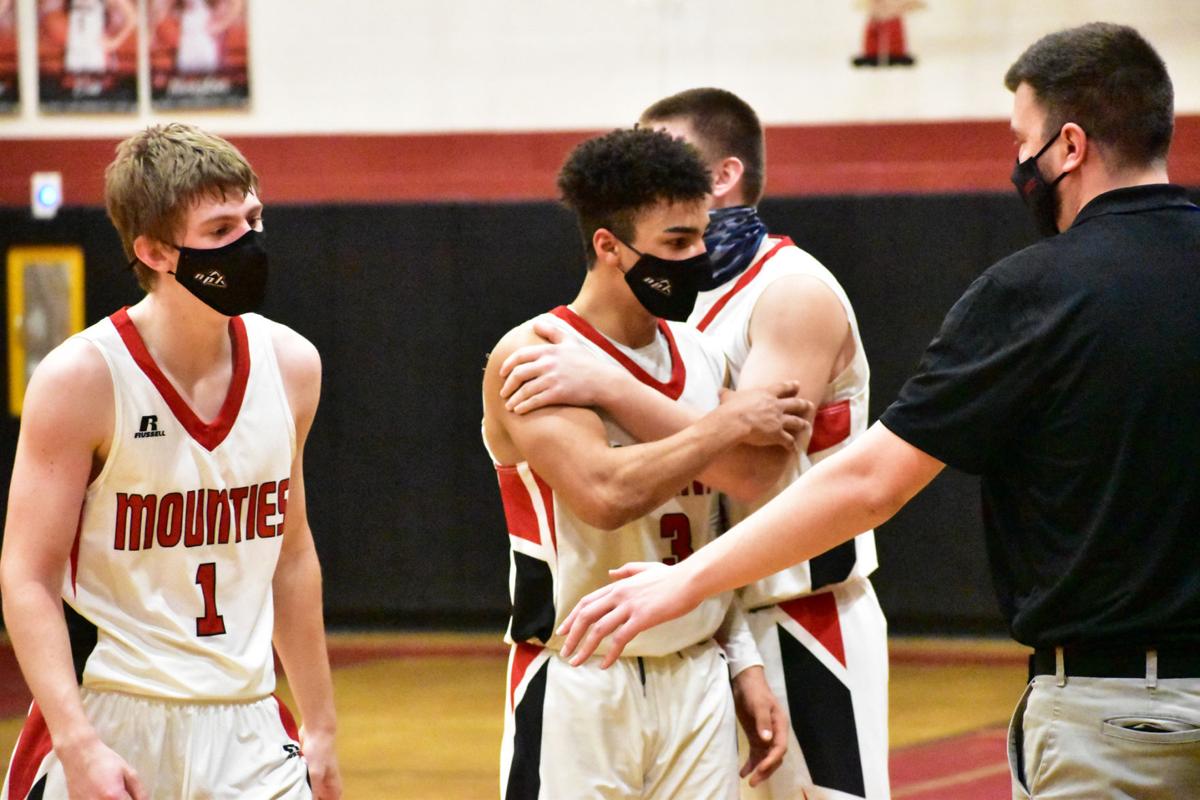 The NP-Liberty players celebrate after their victory over Lourdes Regional on Saturday, Marc 6. 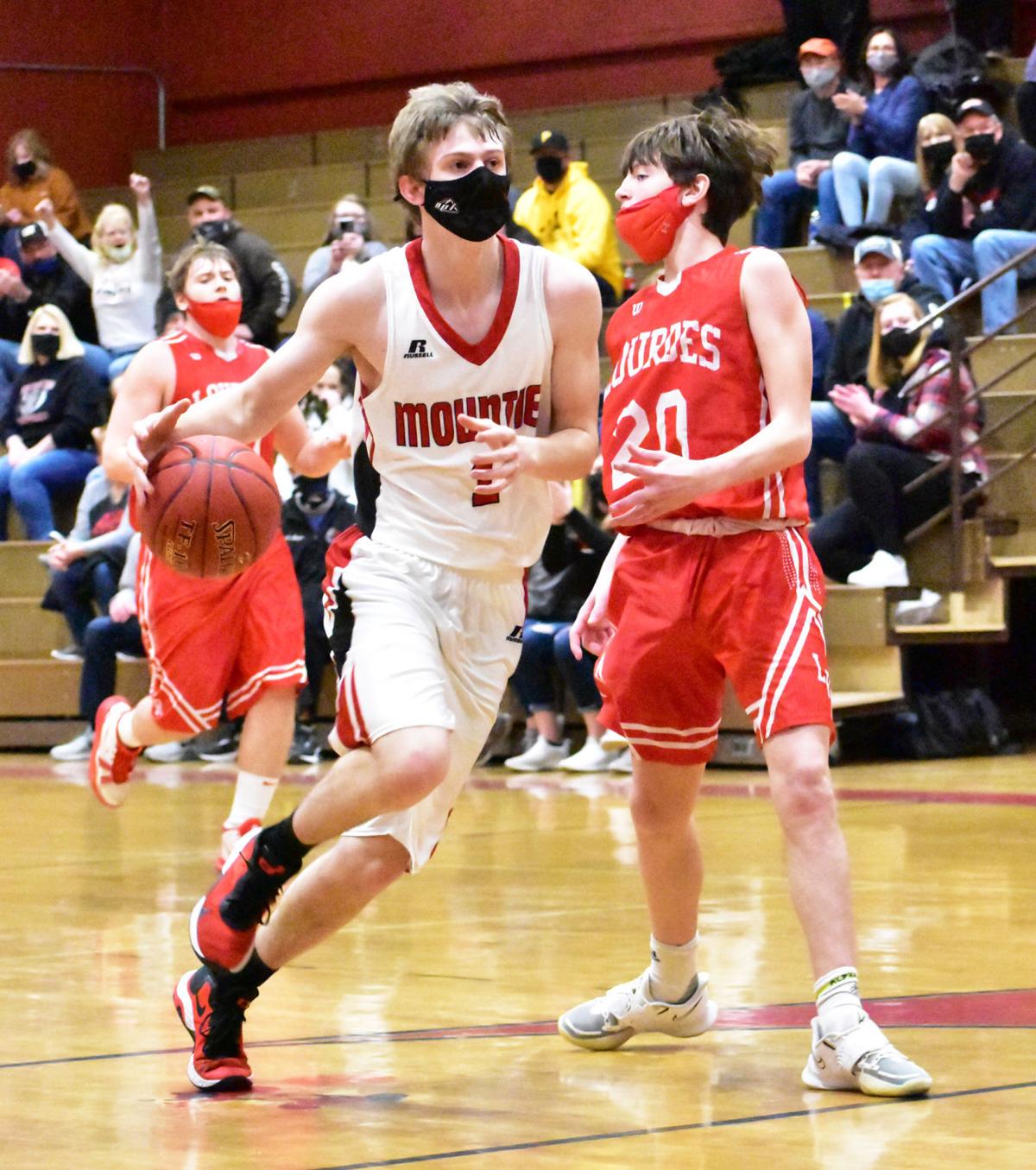 Senior North Penn-Liberty basketball player Colton Litzelman drives to the basket during the Mounties win over Lourdes on Saturday, March 11. 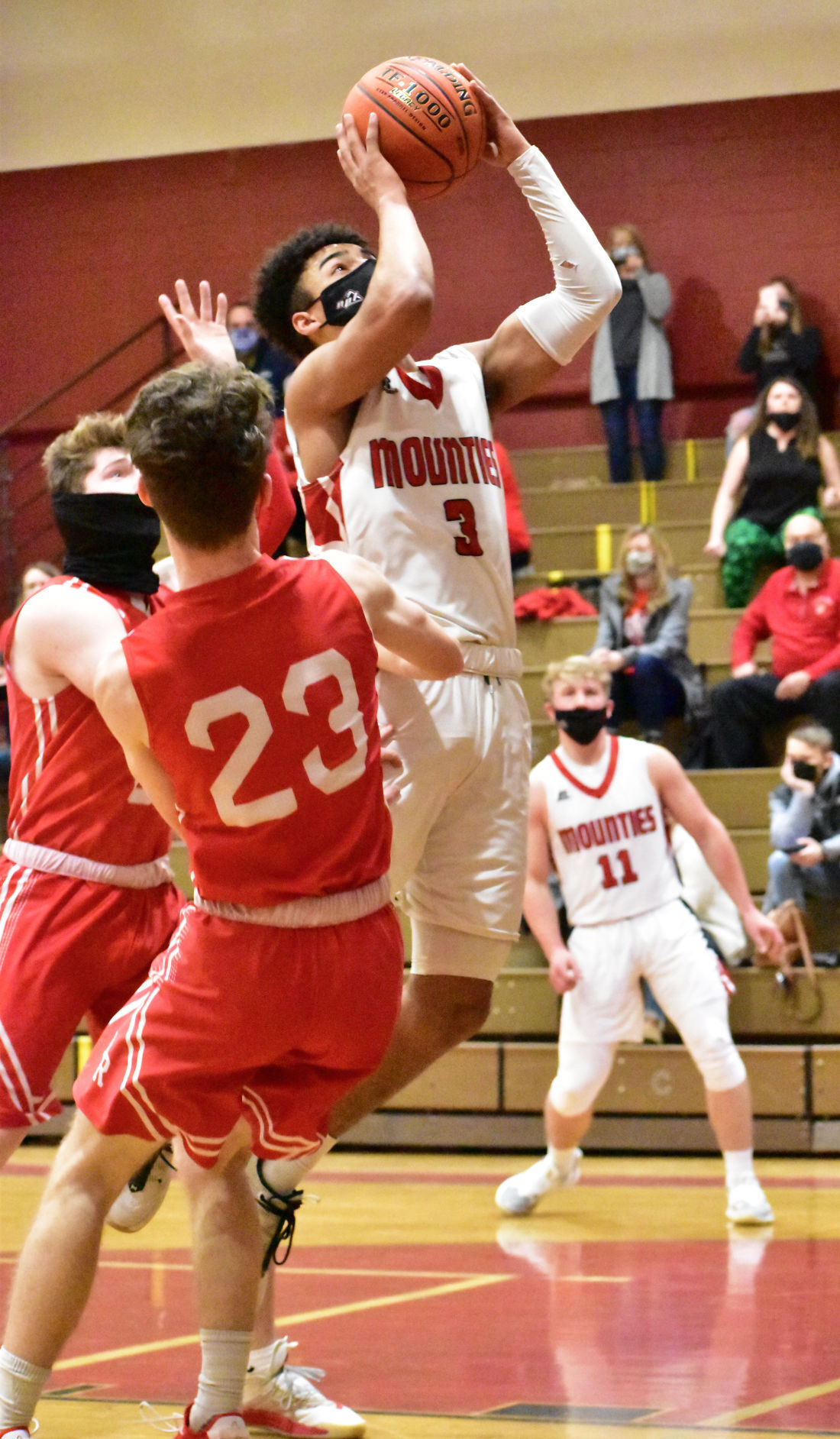 Noah Spencer drives to the basket for a contested shot during the NP-Liberty Mounties win over Lourdes Regional on Saturday, March 6. 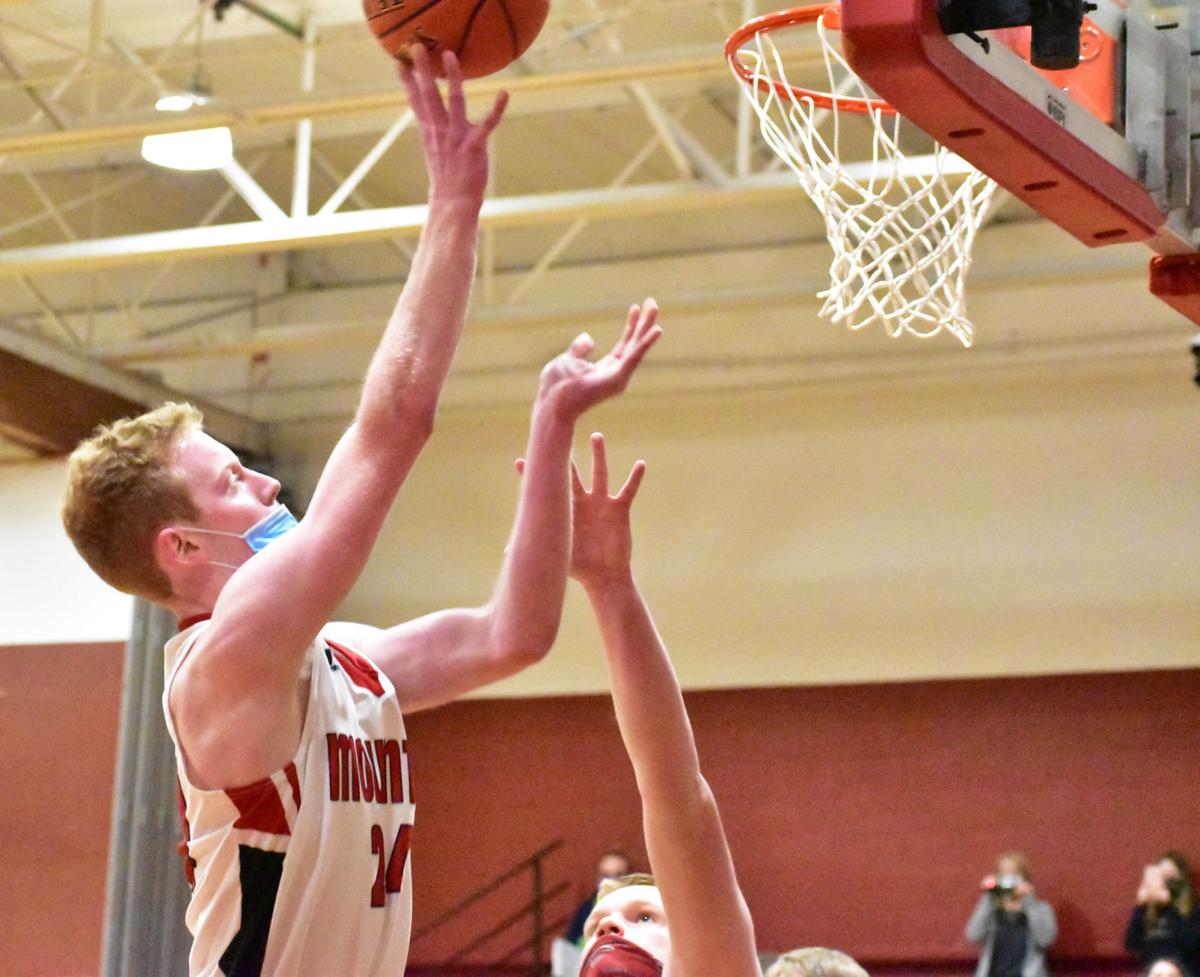 Brandon Thompson shoots a layup during the Mounties win over Lourdes Regional on Saturday, March 6.

Noah Spencer leads the fast break during the Mounties win over Lourdes Regional on Saturday, March 6.

The NP-Liberty players celebrate after their victory over Lourdes Regional on Saturday, Marc 6.

Senior North Penn-Liberty basketball player Colton Litzelman drives to the basket during the Mounties win over Lourdes on Saturday, March 11.

Noah Spencer drives to the basket for a contested shot during the NP-Liberty Mounties win over Lourdes Regional on Saturday, March 6.

Brandon Thompson shoots a layup during the Mounties win over Lourdes Regional on Saturday, March 6.

LIBERTY — With a chance to play in the District 4 A Championship Game for the first time since 1989 hanging in the balance, the North Penn-Liberty Mounties (14-2) lean edon their defense to secure a 44-36 victory over Our Ladies of Lourdes Regional Academy Red Raiders (10-12).

“I think a couple of times Colton (Litzelman) got into a defensive position and got a couple of steals and led the charge on the defensive end,” NP-Liberty Head Coach Brian Litzelman said. “We just tried to pressure their guards and make them earn stuff.”

In a game where baskets didn’t come easily for either side, the Liberty boys were able to use opportunistic plays down the stretch to bury their opponent on the way to their first trip to the District Championship game in 32 years.

“Being able to play these last two years and having those games has helped us,” Colton Litzelman said. “We had to push ourselves to play defense a little bit better, and it gave us a little bit more confidence and we came out with the win.”

During the first quarter, both teams were stalwart on the defensive side of the court, and senior point guard Noah Spencer was ice cold from the field, missing on his first few attempts and not coming away with any points in the first frame.

The defense was able to keep the game close, as the Mounties only trailed 9-8 after the first quarter.

Though the second-quarter score was a stalemate with both teams scoring 12 in the frame, it was about the midway part of the frame where Spencer started to see shots fall and the office for Liberty started to find a groove.

“I just told him he’s got to go through and get to the basket somehow,” Coach Litzelman said. “He’s got to let the flow of the game come to him, I think he was stressed and I think that being so close to 1,000 (points) was a stressful situation.”

Spencer came into the contest only needing 20 more points to join the 1,000-point club, but once he put that notion into the back of his head, his shots began to fall.

His two late buckets plus a steal and layup from Colton Litzelman helped them grab a lead with only 30 seconds left in the half, but a putback with time ticking down from Lourdes’ Maxwell Reiprish gave the Red Raiders a 21-20 lead at the half.

With the game in the balance in a situation all too familiar to the Mounties, they responded fantastically with Spencer taking charge.

Two three-pointers from the point guard and eight total points in the frame helped the Liberty team take control of the game heading into the final quarter with a 31-29 lead.

The defense took over down the stretch and even though Lourdes found themselves sneaking back into the game periodically, big plays down the stretch on defense for Colton Litzelman, a late three-pointer from Koleton Roupp, and six fourth-quarter points from Spencer proved to be the deciding factor as the Mounties held Lourdes to just seven fourth-quarter points to take the victory on their home floor.

Spencer finished the game with 18 points in the games (14 in the second half) to go along with 10 rebounds, three assists, and two steals.

Once the senior dialed in, he helped push the offense to a victory in a game where points were hard to come by. He now sits just two points away from the coveted 1,000-point club.

Colton Litzleman was the leader on defense, and the senior continues to be a stopper for the Mounties as they continue their run to try and capture a title.

He racked up nine points, four rebounds, a game-high four steals including the biggest play of the night where he came up with a steal while his team only led by four, got fouled on the other end, and knocked down two free throws to help ice the game.

“I was just being a heads-up guy,” Litzelman said. “Sometimes I help a bit too much on defense, but that time I did it just right. I saw their point guard bringing it down, turned my head, and when I turned back I stole the ball and I just went for it and took it from there and I was like, ‘I’m going to take us to a District Title game.’”

Senior center Brandon Thompson turned in his usual solid game as he corralled 10 rebounds to go along with his eight points, Roupp had three points, Kevin Alexander netted four points and Derek Litzelman added two points as the Mounties picked up the win.

The Lourdes team was led by Chris Feudale who notched 10 points, Hunter Reed who scored seven, and Joey Nguyen who added six in the effort.

With the win, the Liberty team now faces their greatest challenge of the 2021 season, as they travel to not only their biggest game as a unit but also against the toughest matchup they have seen all season in the St. John Neumann Golden Knights (16-3) who have a lineup of extremely talented players and a long history of success.

The Knights are coming off a 74-53 battle against Sullivan County (9-8) in their playoff matchup to grab a spot in the District Finals.

With senior Colton Litzelman expected to take on one of the two Hill brothers (David Hill -23 ppg; Davion Hill 21.3 ppg), he will turn to some of his matchups earlier this year as a great learning experience with the daunting task that is ahead.

“I think I just need to prepare the same way as I did for (Ty) Barret,” Colton Litzelman said. “I’m not saying the Hill brothers aren’t spectacular but I still think Ty is better.”

The North Penn-Liberty Mounties will travel to Williamsport on Thursday, March 12 to take on the St. John Neumann Golden Knights at 8 p.m. for a shot at the title.

“I just think we have to play as a team,” Coach Litzelman said. “I think if we can put five guys on the court that can play as a team, we have a shot.”

Partly cloudy skies in the morning will give way to cloudy skies during the afternoon. High 69F. Winds SW at 5 to 10 mph.