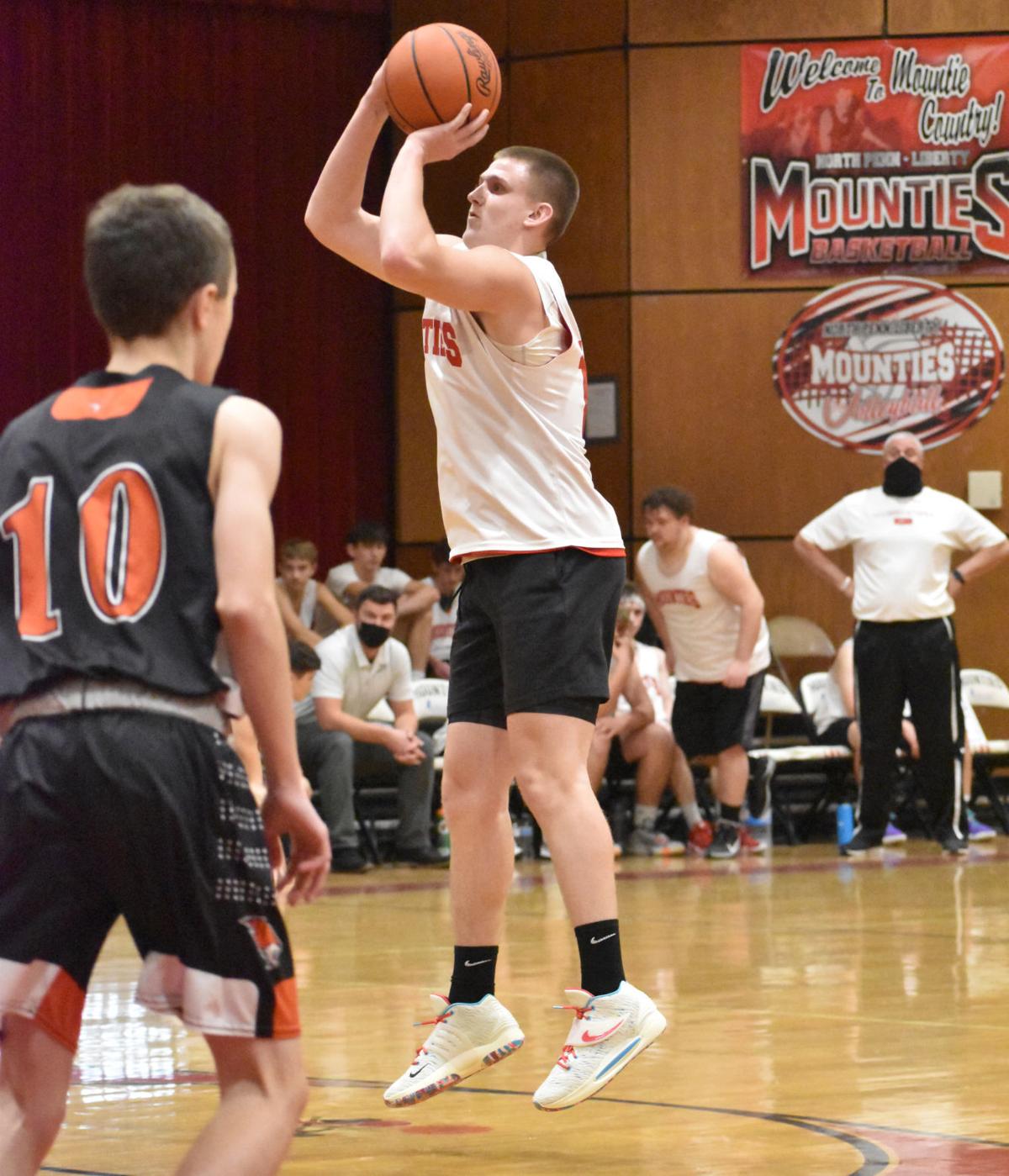 NP-Liberty’s Derek Litzelman takes a jump shot during their scrimmage with Galeton on Monday, Nov. 29. 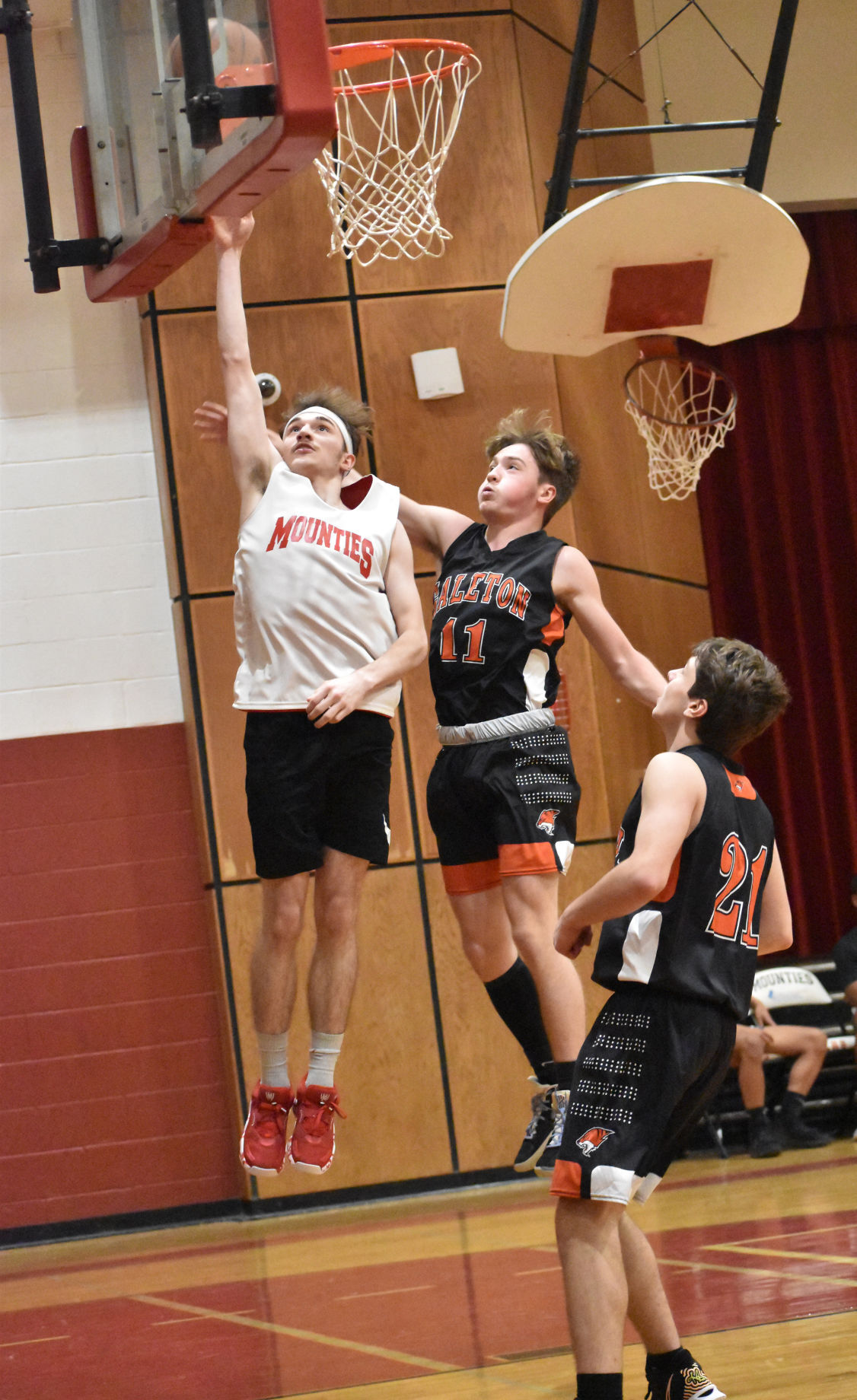 NP-Liberty’s Kyle Davis puts a shot up after an offensive rebound during their home scrimmage against Galeton on Monday, Nov. 29. 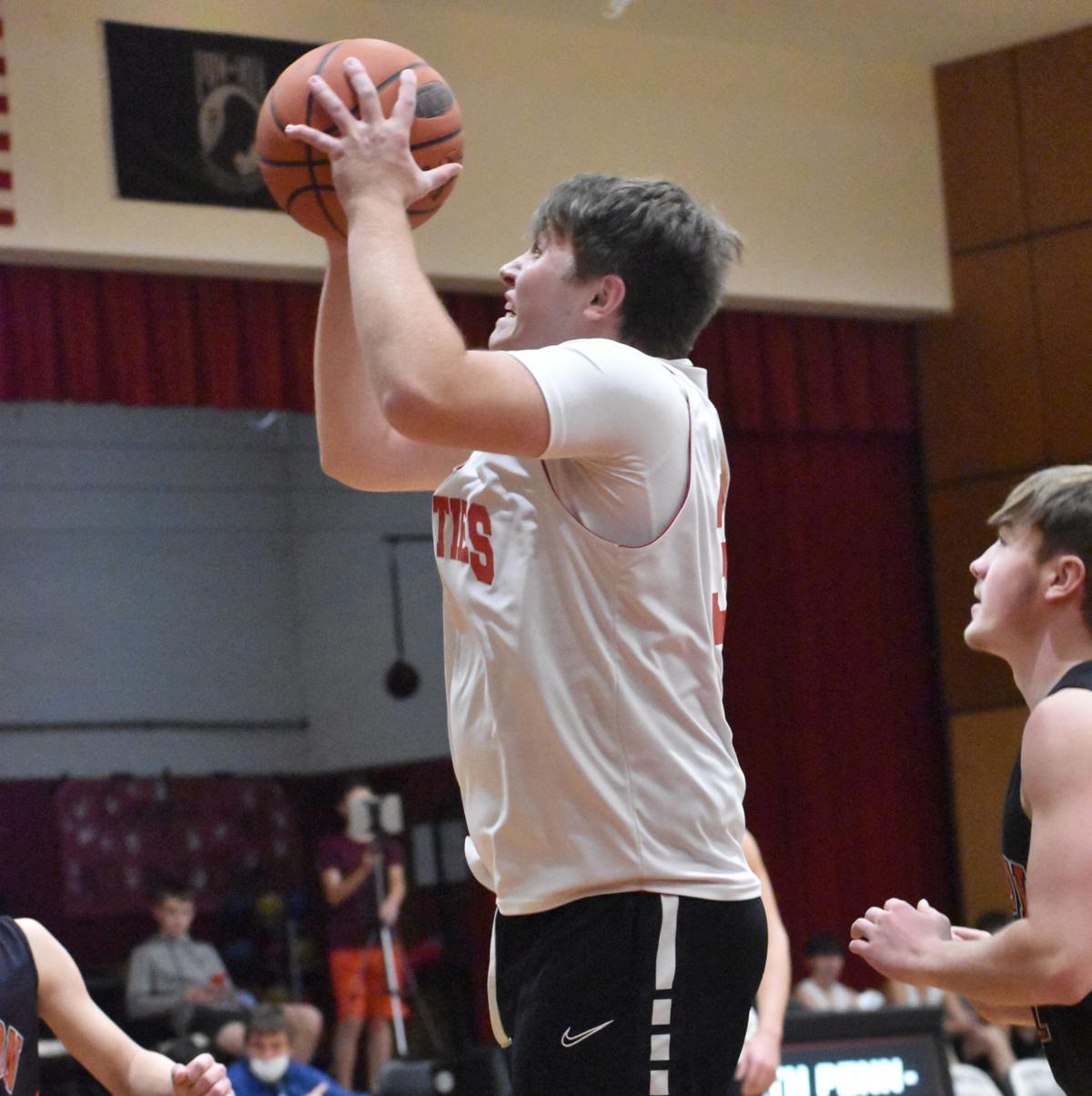 Liberty’s Devin Bradley gets to the rim for a layup during their scrimmage against Galeton on Monday, Nov. 29. 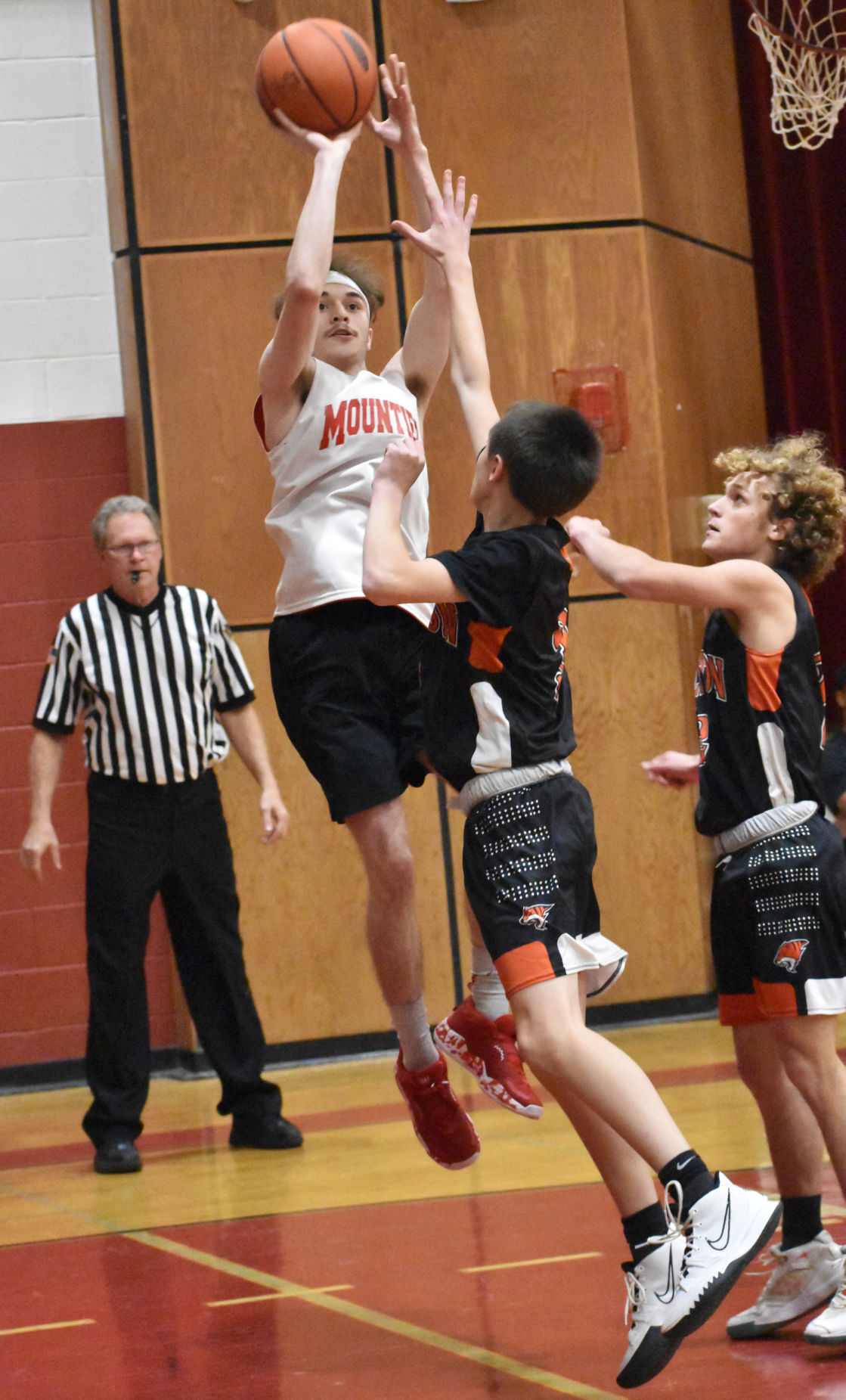 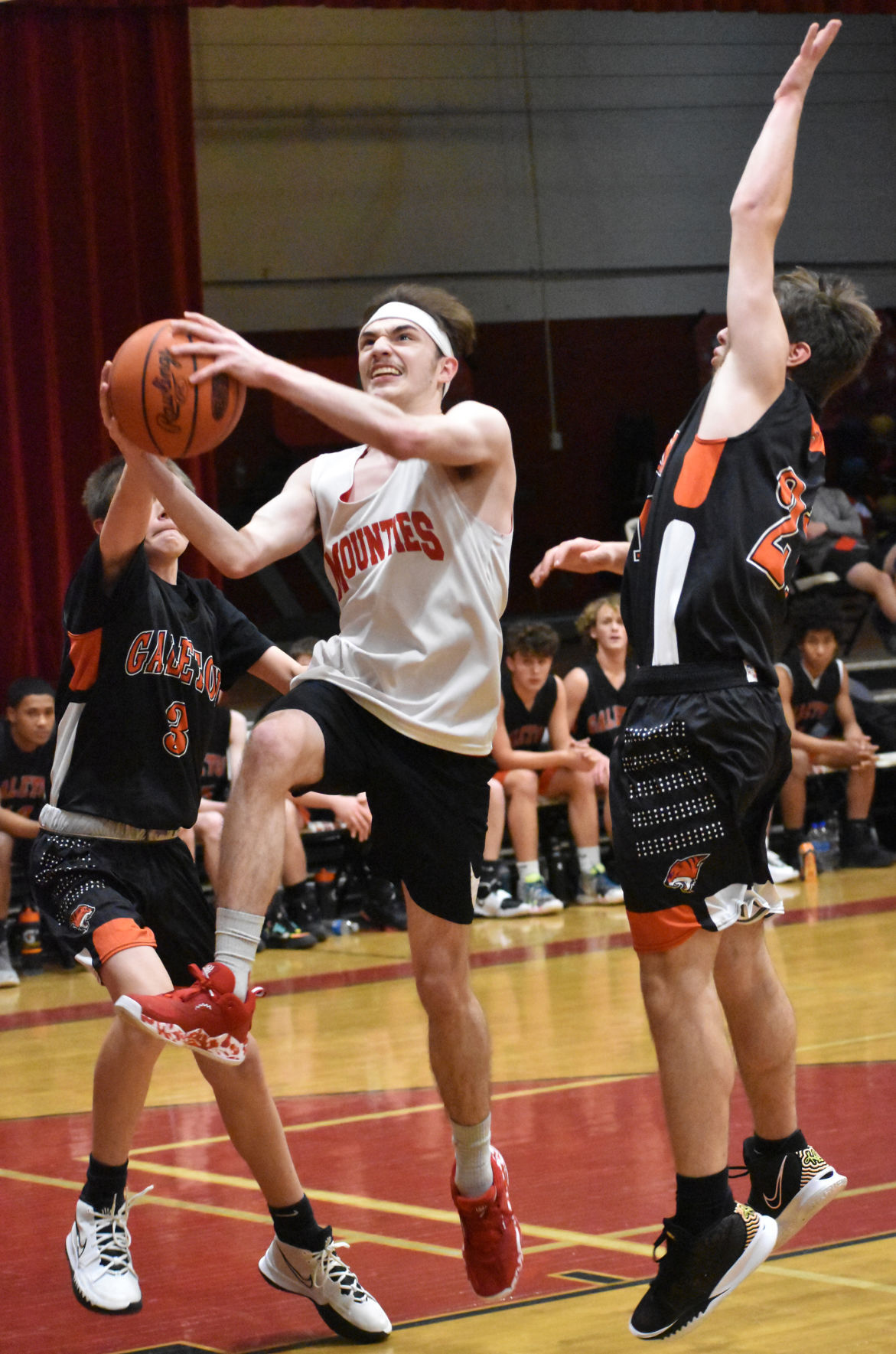 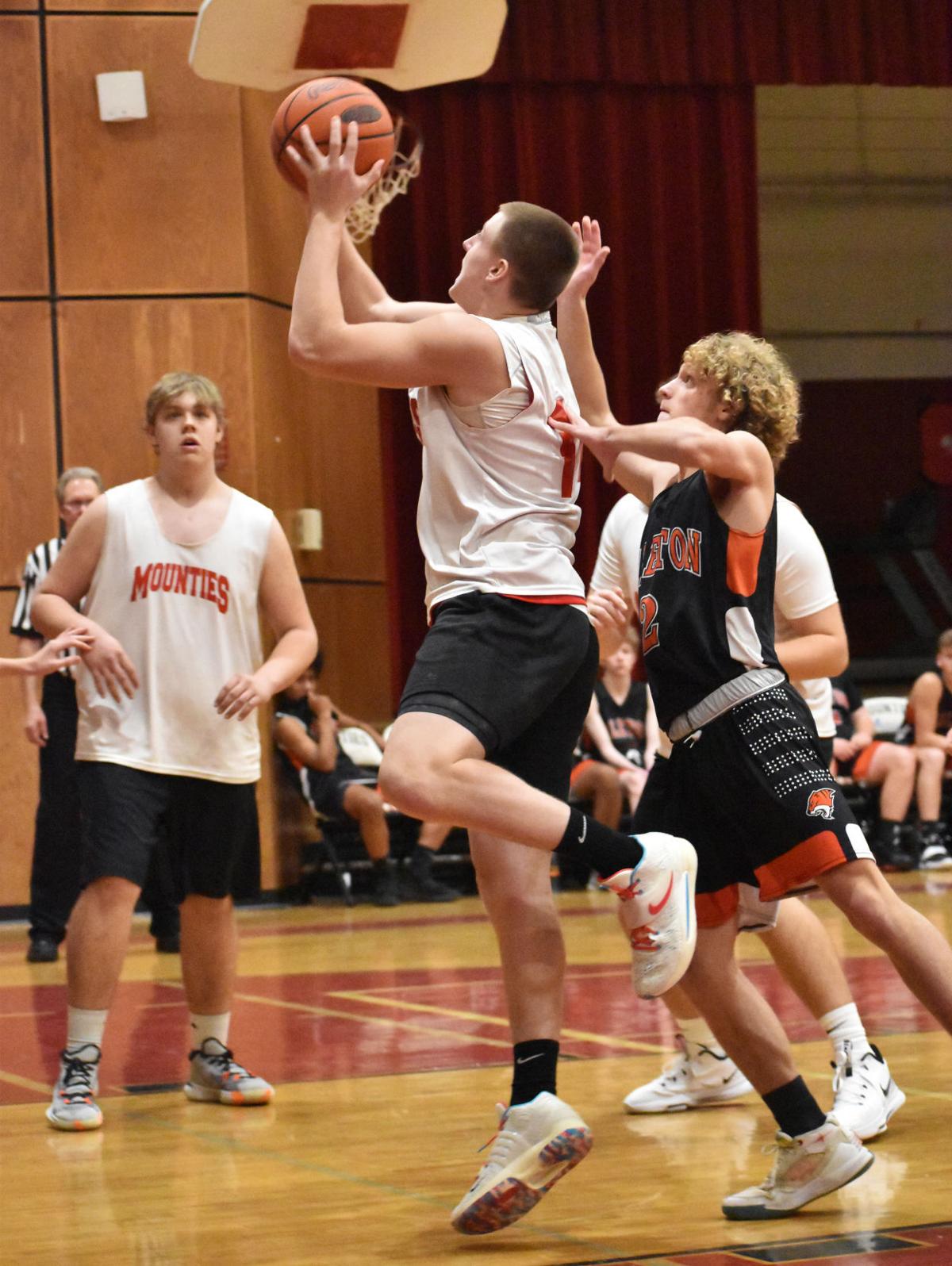 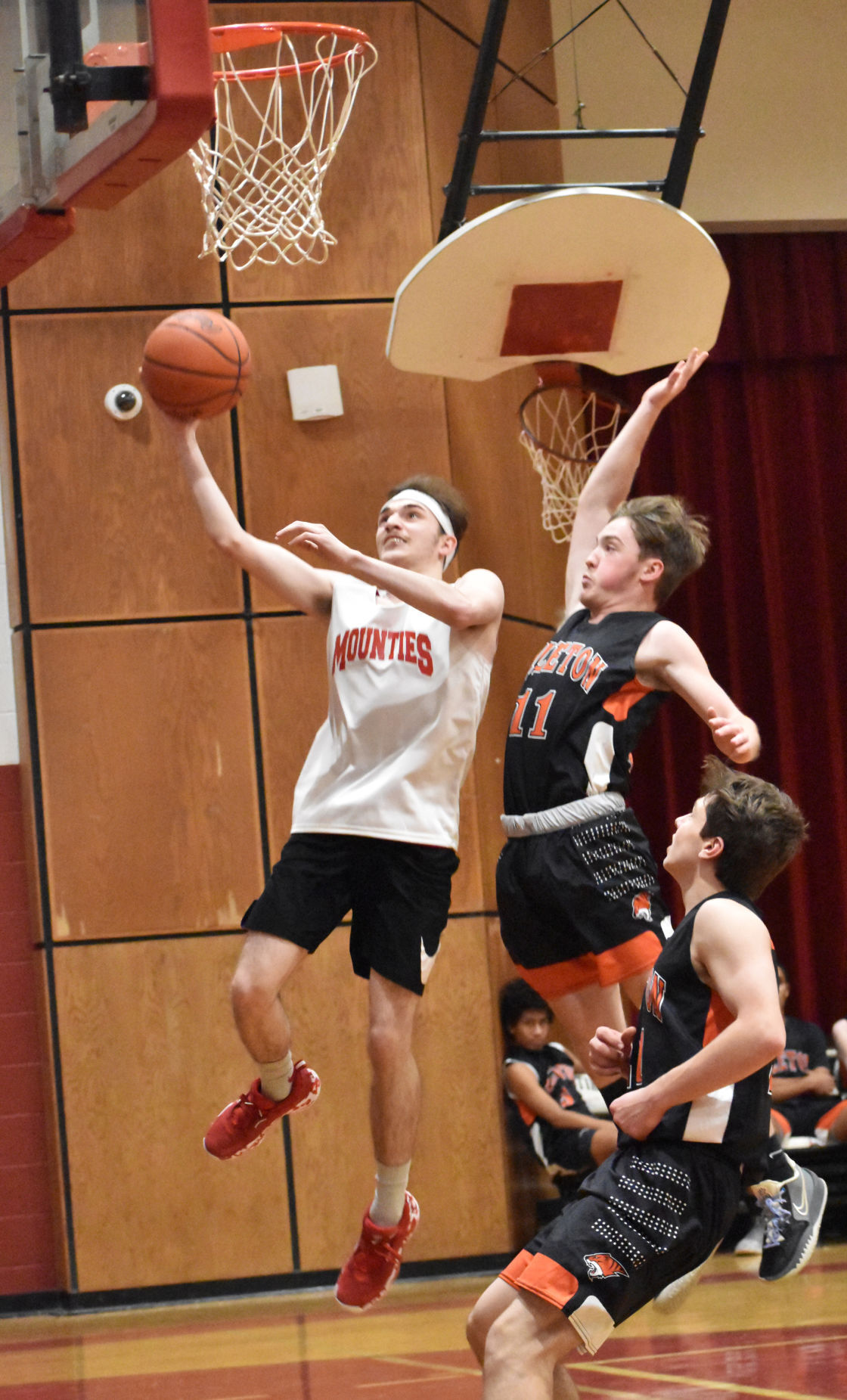 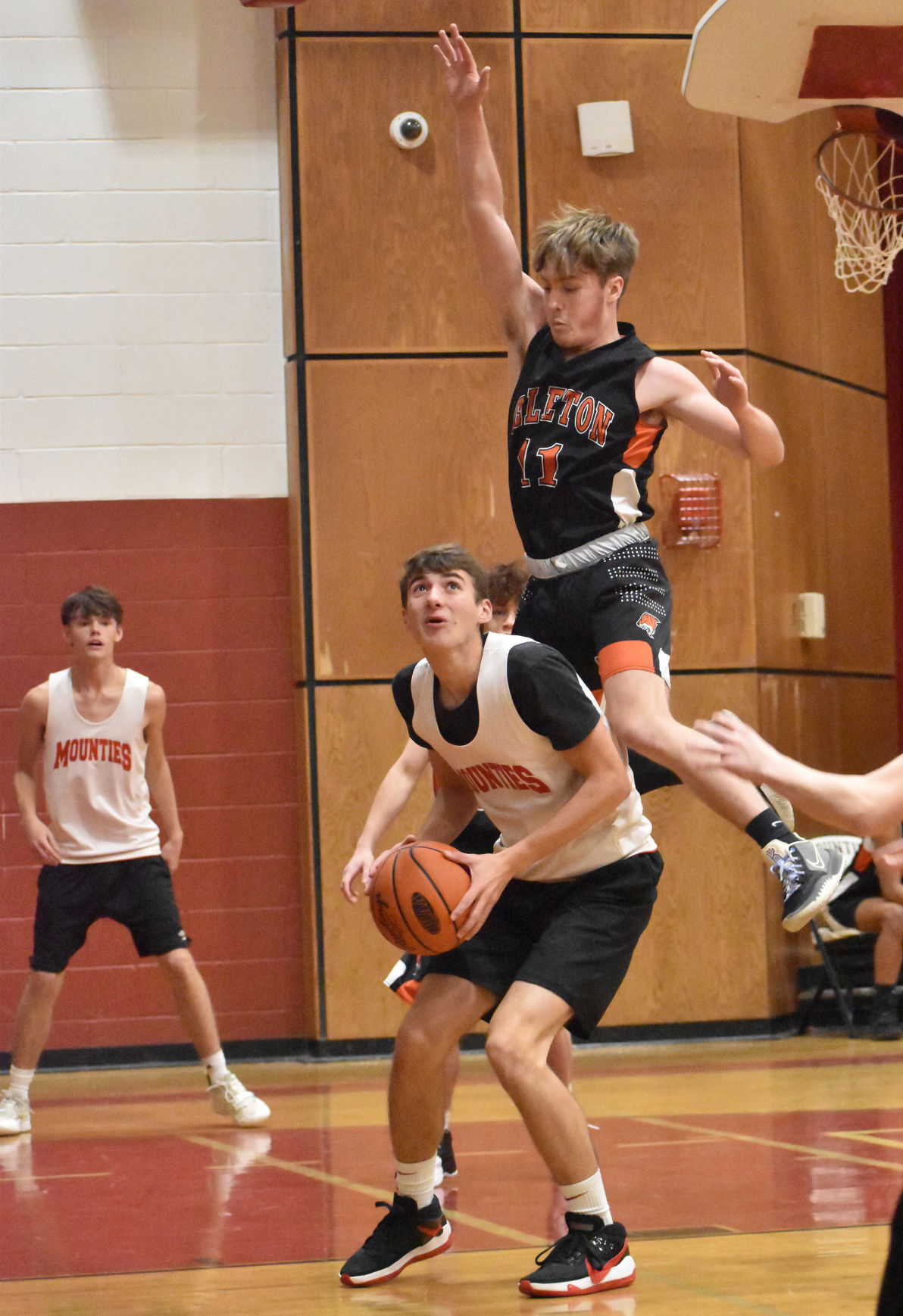 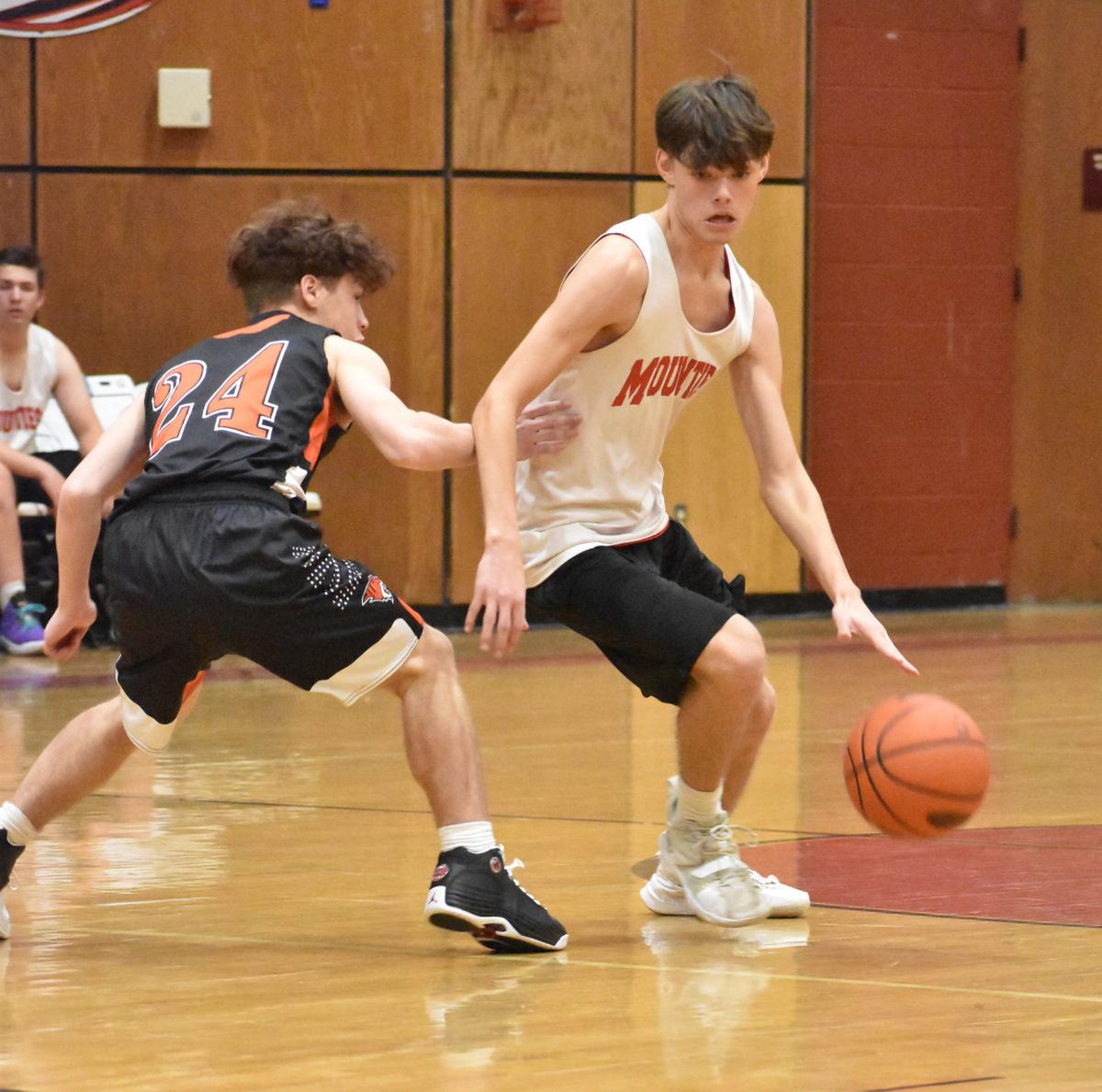 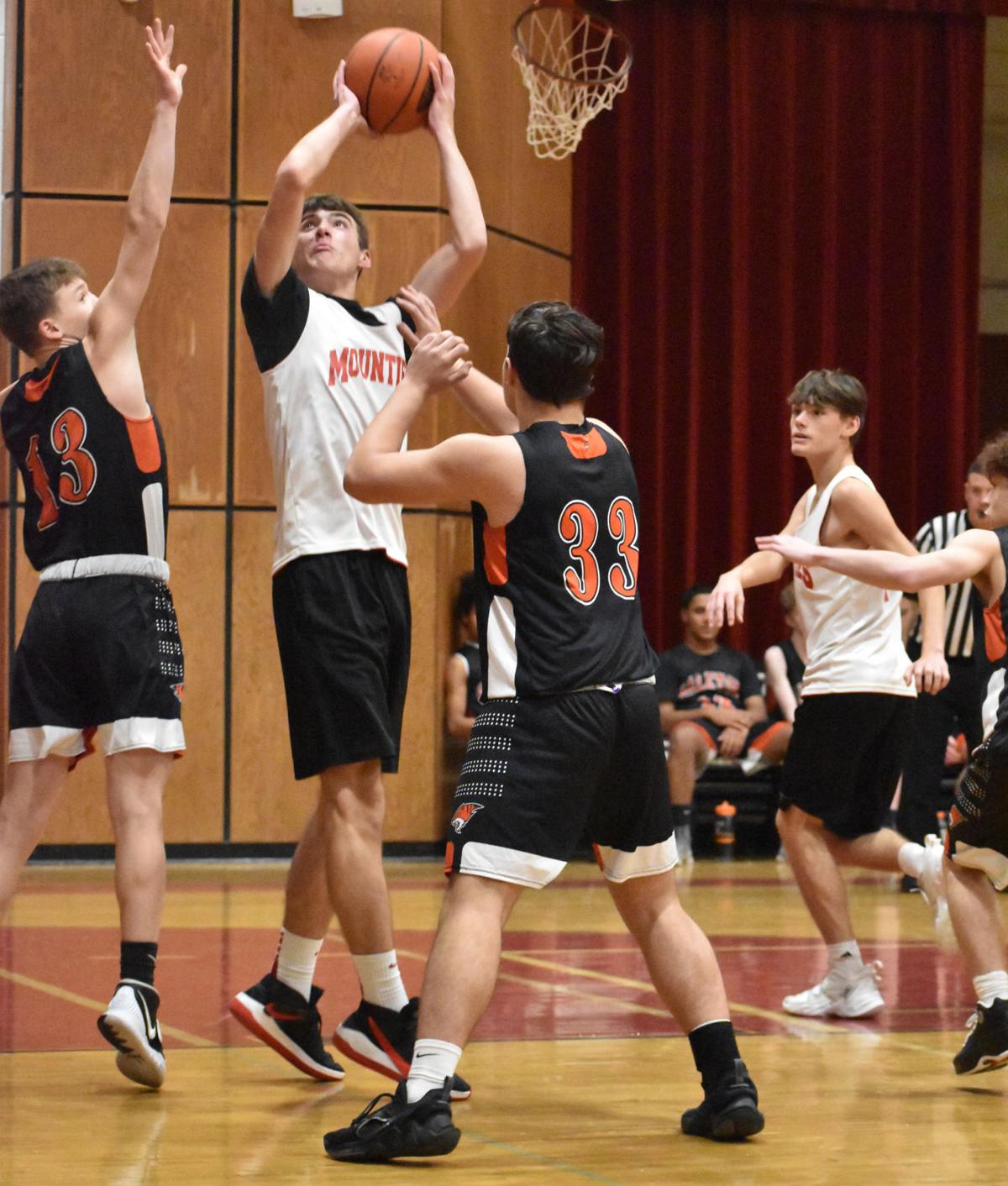 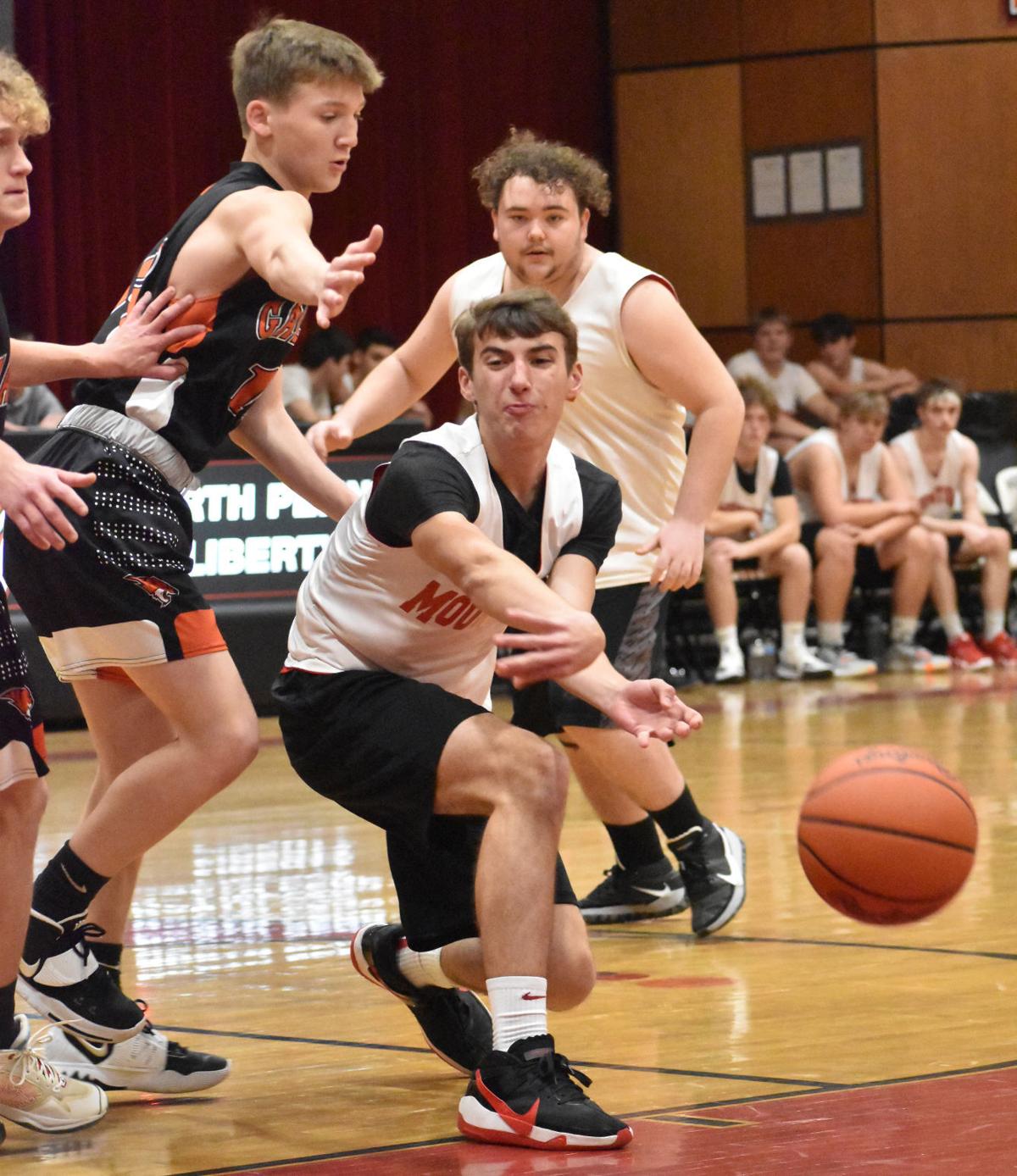 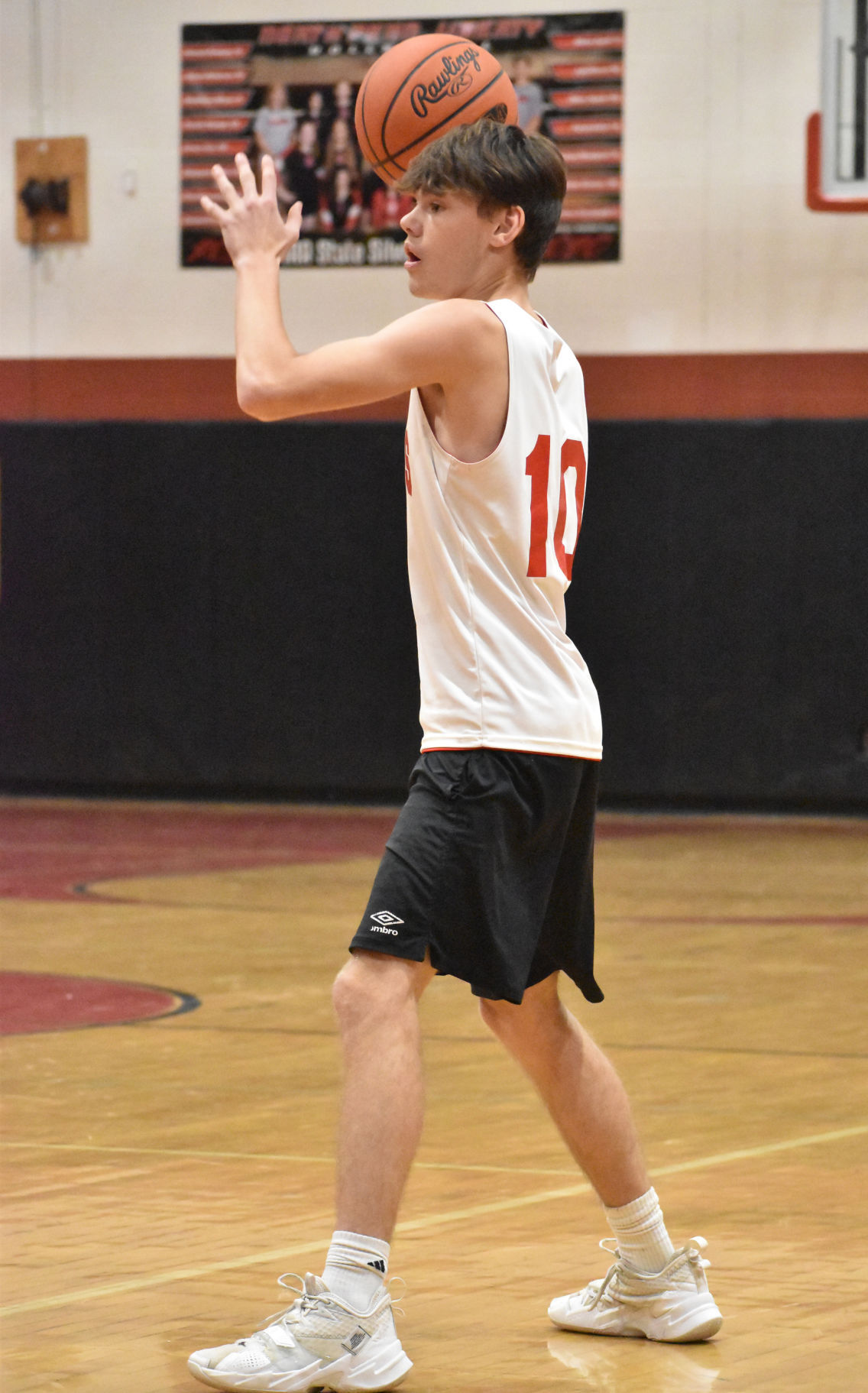 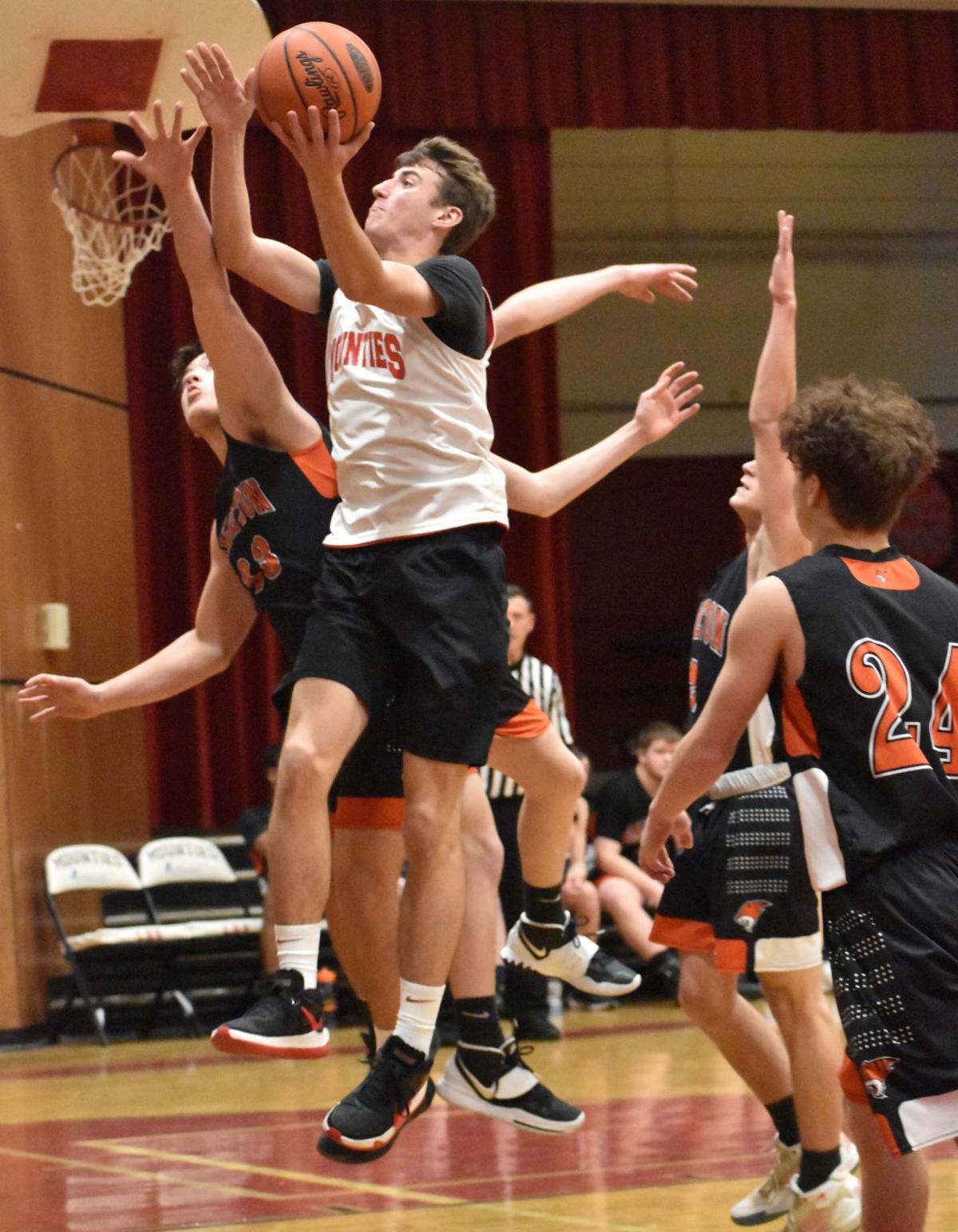 NP-Liberty’s Derek Litzelman takes a jump shot during their scrimmage with Galeton on Monday, Nov. 29.

NP-Liberty’s Kyle Davis puts a shot up after an offensive rebound during their home scrimmage against Galeton on Monday, Nov. 29.

Liberty’s Devin Bradley gets to the rim for a layup during their scrimmage against Galeton on Monday, Nov. 29.

LIBERTY — The North Penn-Liberty Mounties basketball team is coming off back-to-back Northern Tier League Small School Championships, but after losing their entire starting lineup to graduation put a new group of players on the floor for their Monday, Nov. 29 scrimmage at home against Galeton and will look to compete at a high level during the 2021-2022 season.

“We are trying to do a lot of new things that are fitting to the style of players we have and these kids can bring to the table, we don’t compare them to last year,” Head Coach Brian Litzelman said. “We are doing new offensive sets, and it’s a whole new starting line and I like the challenge. It’s been fun so far.”

The new-look Liberty squad who took the floor during their scrimmage consisted of lineups that included one of the only players to see significant floor time last season in Derek Litzelman as well as a mix of Kyle Davis, Devin Bradley, Noah Shedden, Hunter Thompson, Talon Kolb, Caiden Alexander as well as a mix of other players that will be expected to take on an expanded role this season.

Despite the on-floor inexperience, the roster has eight seniors that should provide some much-needed leadership as the Mounties look to surprise some teams with not only the players taking the floor being relatively unknown but also with an expected switch of style this year.

“We’re still going to try and push the ball, but we don’t have somebody who can finish at any point in time like last year,” Coach Litzelman said. “We’re going to run but I think of times we’re going to have to settle down and run plays to get good looks...It’s going to have to be the mentality of ‘Hey I have a good shot,m but the next guy’s got a better shot’ and we have to just play for the team.”

Expect to see the ball ping around the floor for Liberty this season with a much more balanced approach to their offensive game plan.

The player who will be responsible for making a lot of that work will be Bradley, who after being a late addition to the roster last season has stepped up into the primary ball-handler role and during their scrimmage looked the part as he showed some strong passing ability as well as shot creation and finishing at the rim.

“Everything has been working well so far,” Bradley said. “I came here and they just let me play, we all clicked fast.”

Though he is new to the roster and starting in the Liberty lineup, he is a player who will step up into an important void left by the group before him; which is being a leader.

“I really want to take on more leadership this season,” Bradley said. “We just got to get some time on floor together and getting ready as a team, because I haven’t played with the team that much so far.”

He also brings something important to the offense for Liberty, which is a quick, slashing guard that gets to the rim and finishes in traffic. “He’s a slasher,” Coach Litzelman said. “He can shoot the outside shot, but his slashing is good. He has a nice shooting ability, he likes to finish with a nice floater at the rim.”

That combined with his passing and shooting will be a big lift for the Liberty offense.

“I don’t like to be a selfish player,” Bradley said. “I want to get the whole team involved. I like to bring my defense for the team, and get into fastbreak plays and get easy buckets for our team.”

They also will have a returner in Talon Kolb, who also seemed comfortable as a ball-handler and the coaching staff believes that even though they didn’t see the floor much last season, they will be much better than expected due to the competition they have had internally over the past few seasons.

“I think when you figure that every day in practice you’re either going to guard Noah (Spencer) or Colton (Litzelman), you have to pick up your ball skills,” Coach Litzelman said. “Otherwise you’re going to have your pocket picked all the time. So that was beneficial for those guys, having them work five, six nights a week in practices against those guys. I think that is going to show this season.”

Against Galeton, Bradley knocked down some tough shots and after entering the season a relative unknown could be a player to watch for the Mounties this season.

Another important part of the Liberty team this season will be junior Derek Litzelman, who had a sizeable role this past season, and after working on his game this offseason will be the go-to scorer for Liberty this season as he boasts a diverse combination of size, strength, and speed that could put him on track for a huge season in 2021-2022.

“I worked a lot this offseason, especially with one-on-ones,” Derek said. “Working on my passing and playing a lot with the guys downtown, we worked with them and played all summer.”

Litzelman scored 6.2 points per game this past season as only a sophomore and also corralled 4.6 rebounds per game as well, all in limited minutes.

With an increased workload, expect Derek to be one of the better scorers in the area. Derek also pointed to how important it will be for his team to display balance this season, and commented on how the shooting they have from a plethora of players will be integral to their success this season.

“Everyone, all of our starters can hit from beyond the arc,” Derek said. “If we just work hard and pass the ball and pass a lot, we will hit some shots.”

He also said how they should have a tenacious rebounding team this season, as they boast some size down low and a few big bodies that like to crash the glass on offense and defense.

One of the players who will be shining glass this season for the Mounties will be senior Davis, who during the scrimmage looked tough in the post and pulled down rebounds at a high rate, and showed some nice touch with a few putbacks during the night.

After not playing much last season, Davis is excited for the opportunity to play a big role this season and has noticed himself and others putting in the extra work to be ready when the season tips off.

“It just involves a lot more work and a lot more practice,” Davis said on taking on the starting role. “Just overall, putting in a lot more work and being able to fit certain spots that need to be filled throughout the game… I’ve been working on my rebounding, but I have to keep working and get a lot better.”

Davis isn’t the same type of center as years past but looked the part as he corralled rebound after rebound against Galeton in their first scrimmage. It will be important for Davis to find his rhythm and footing early as he will be tasked with keeping some of the best area players off the glass and contained.

Another player who will see significant time playing as a big man will be Shedden, who also hit the boards hard in their scrimmage and is a tall, lanky and fast player who can cause some matchup problems for other teams who don’t have bigs who can contest with his speed.

“Noah Shedden is long and lanky inside,” Coach Litzelman said. “I think he’ll be able to do some stuff inside.”

With the season right around the corner, the group for Liberty has something to prove.

Many have discounted them as not being the same level of the team as their predecessors, but they believe that they can compete with anyone and will be a team to watch as they look to transition into their new era of players this season.

“I think we are going to relish it,” Coach Litzelman said of the rest of the league not seeing them as a contender this season. “The guys have already talked about the fact that you know, everybody’s going to be looking to get us. We need to do the best we can to make sure we give everybody our best shot. That’s the biggest thing and I’m looking forward to it.”

Snow this morning will give way to mostly cloudy conditions this afternoon. High 27F. Winds WNW at 10 to 20 mph. Chance of snow 70%.