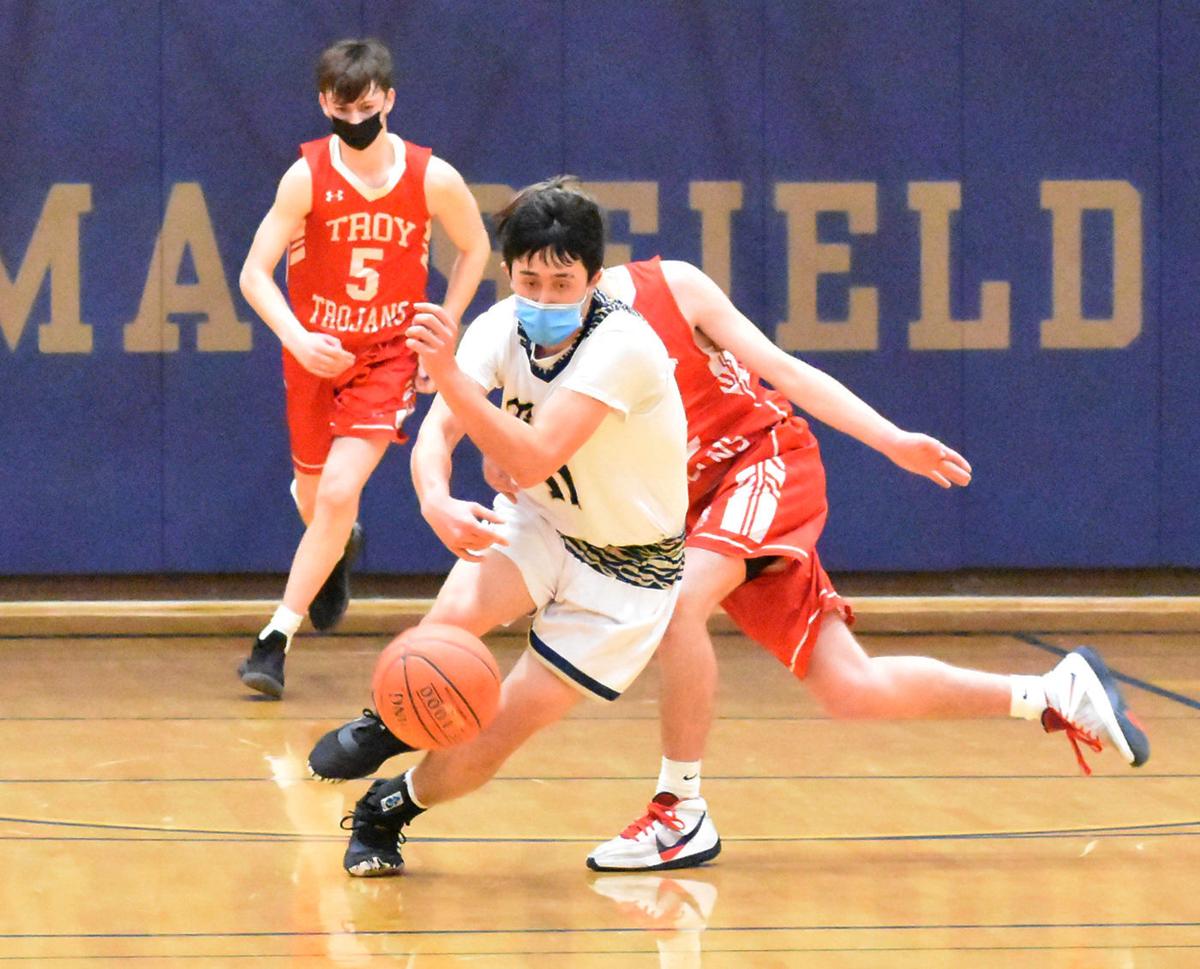 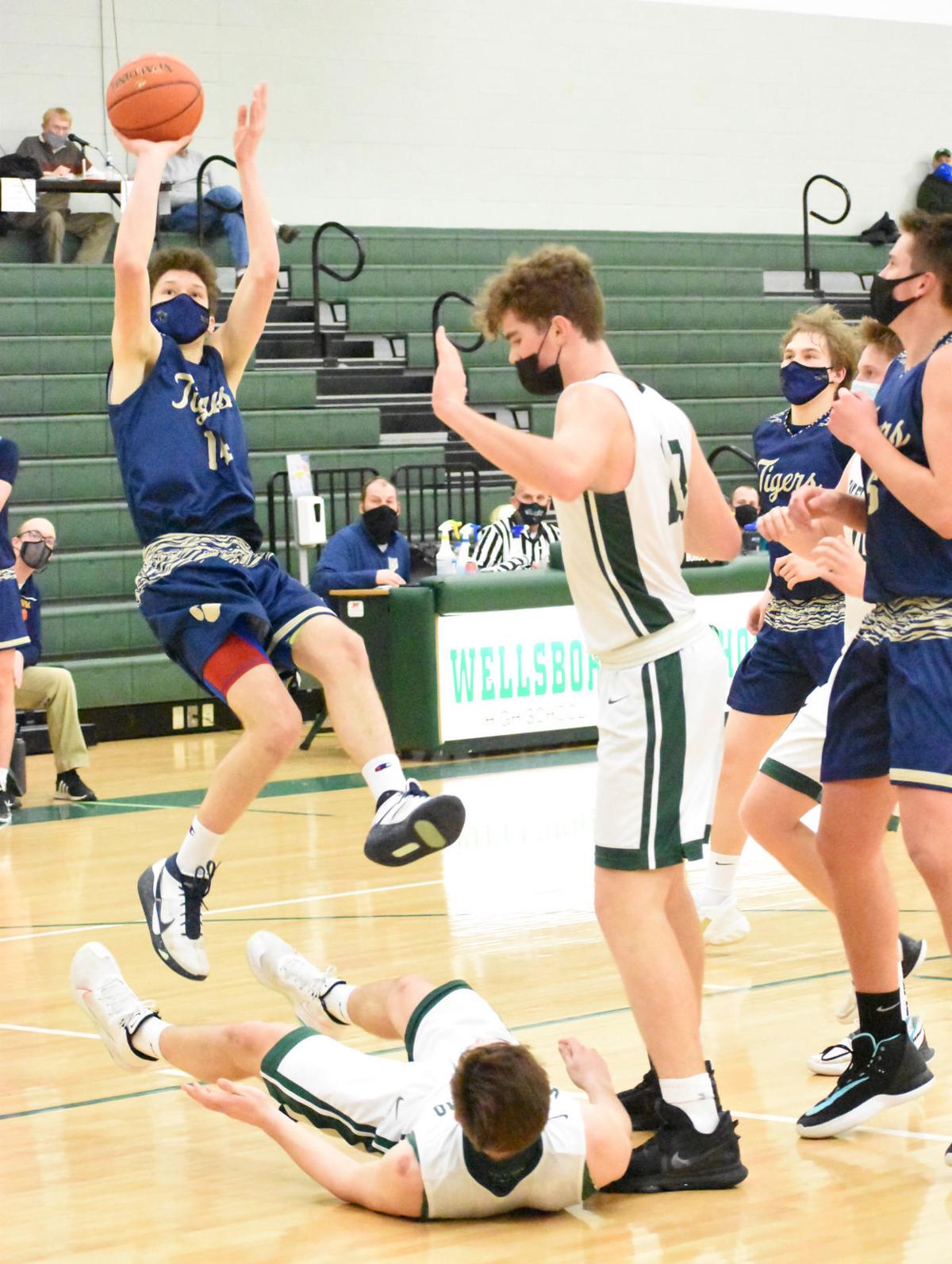 Mansfield's Karson Dominick takes a jumper during their loss to Wellsboro on Wednesday, Feb. 10. 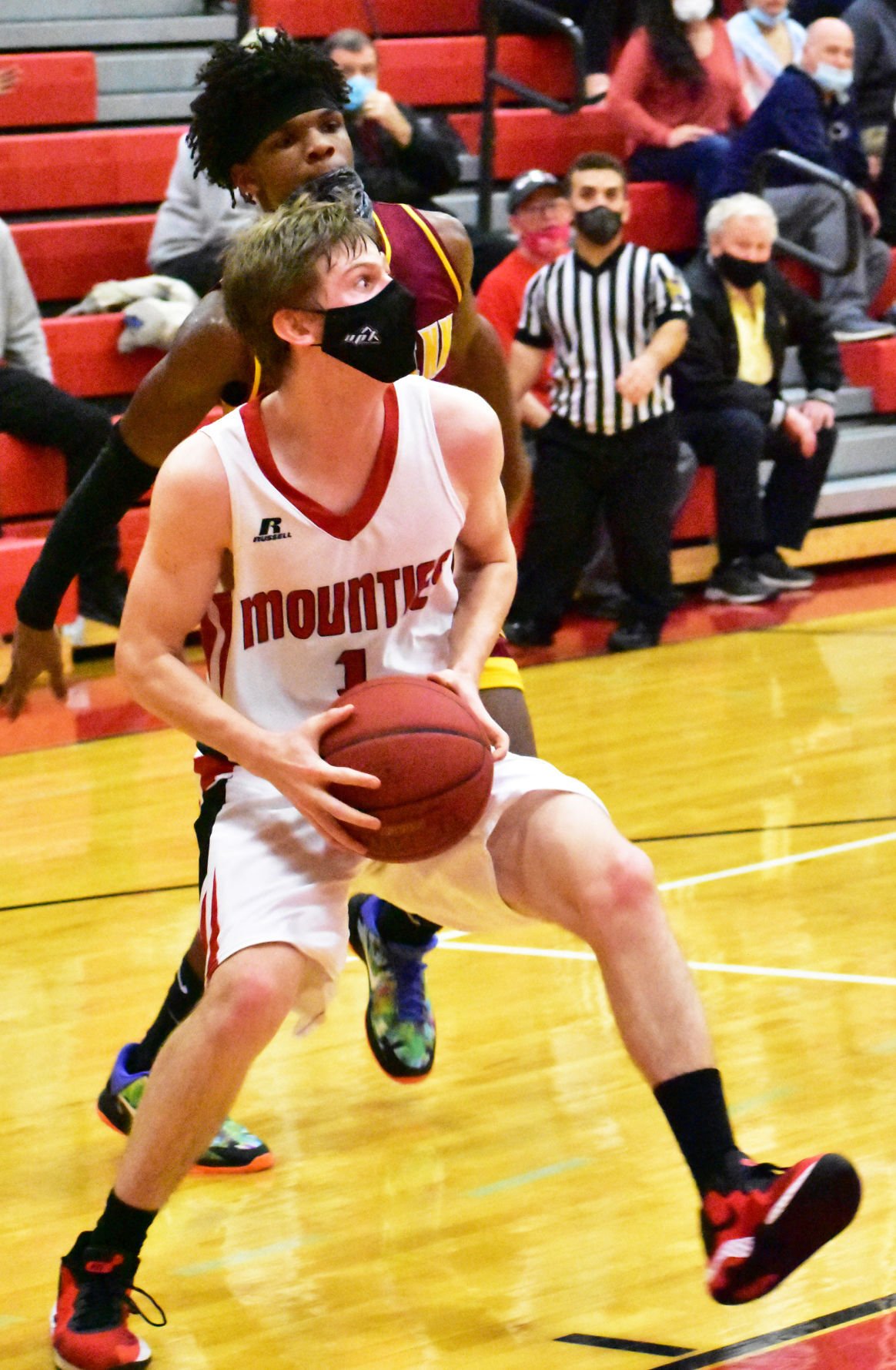 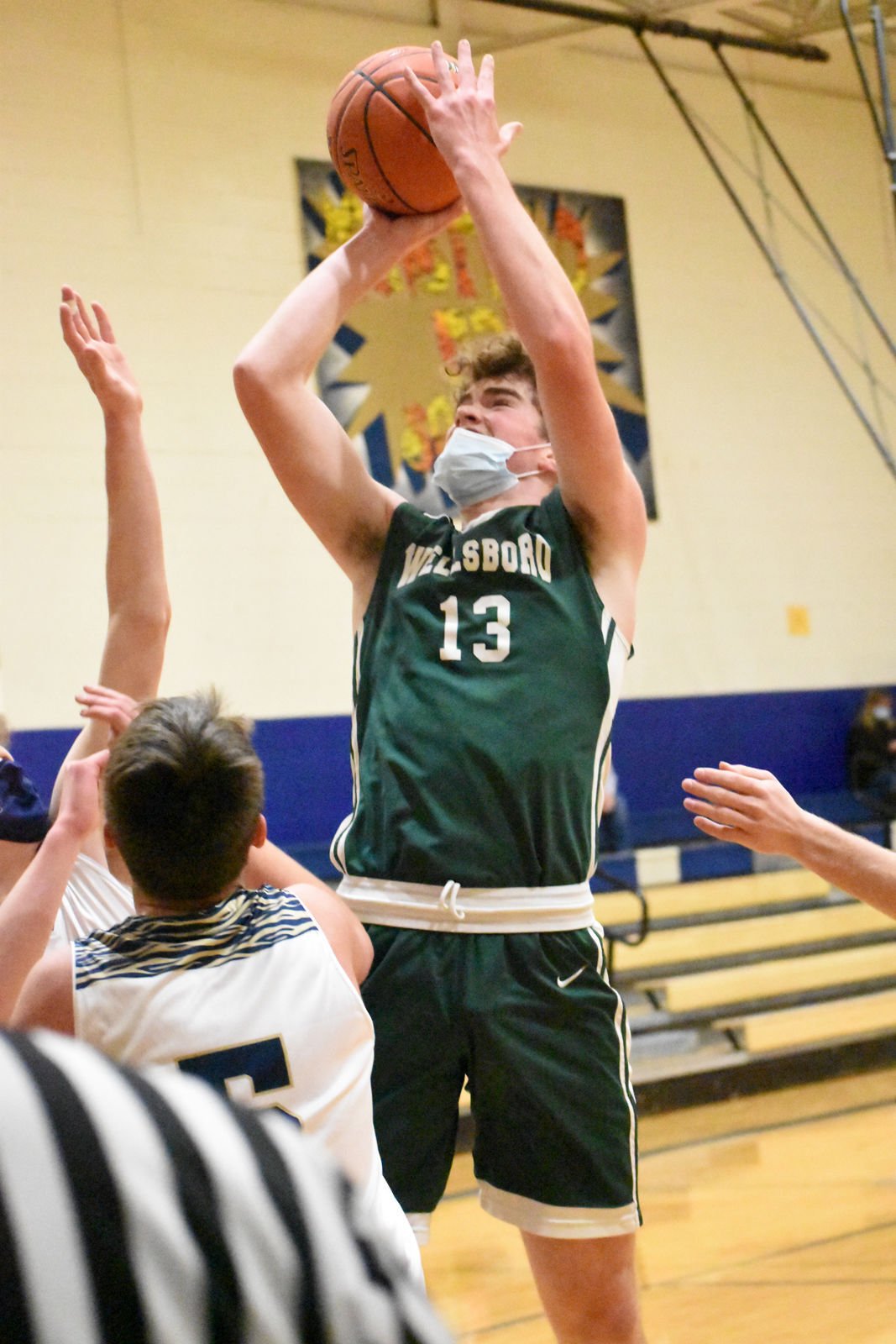 Liam Manning rises up over the defense during the Hornets win over Mansfield on Monday, Feb. 22. 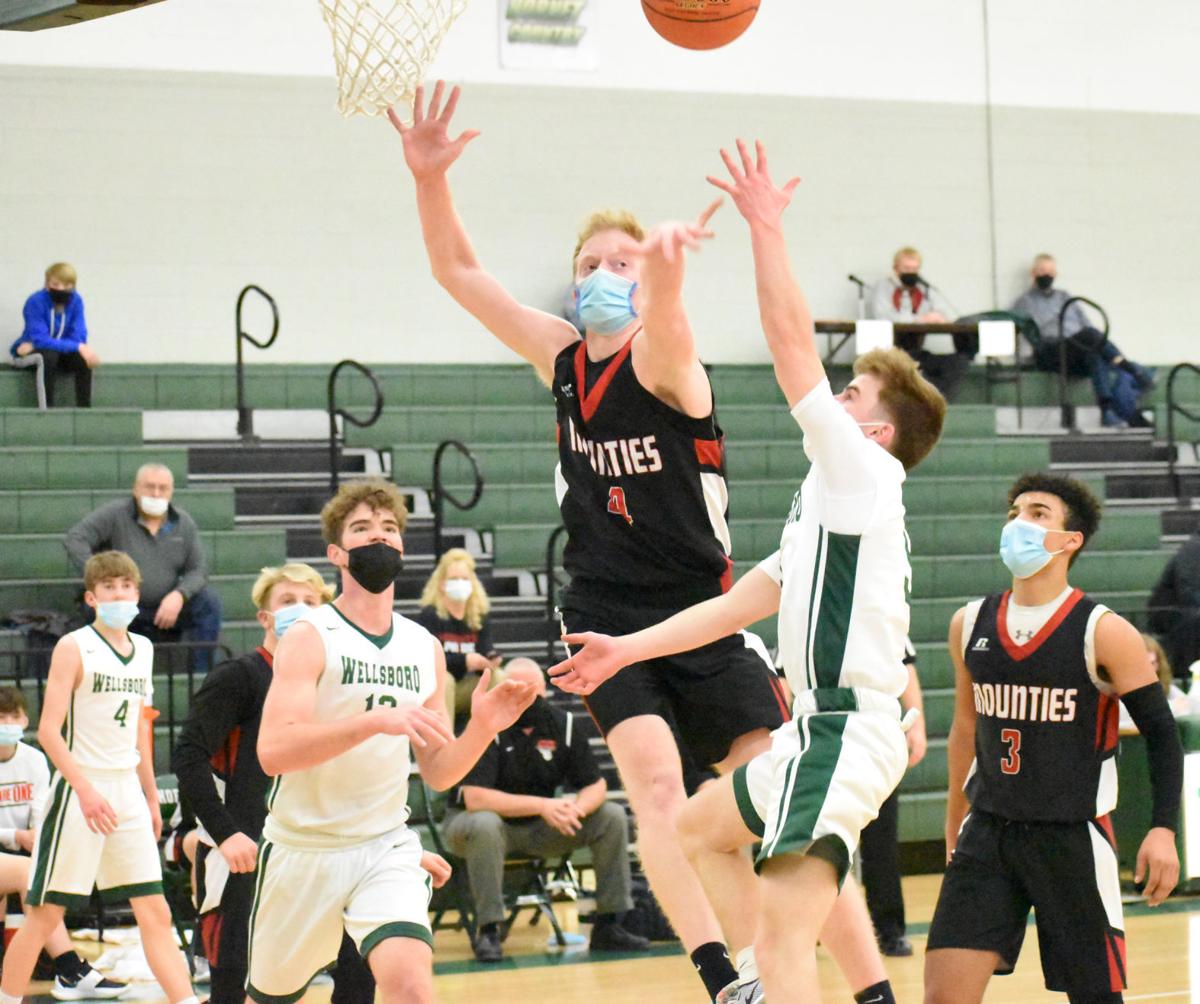 Brandon Thompson blocks a shot by Conner Adams during Liberty’s loss to Wellsboro on Monday, Feb. 8. 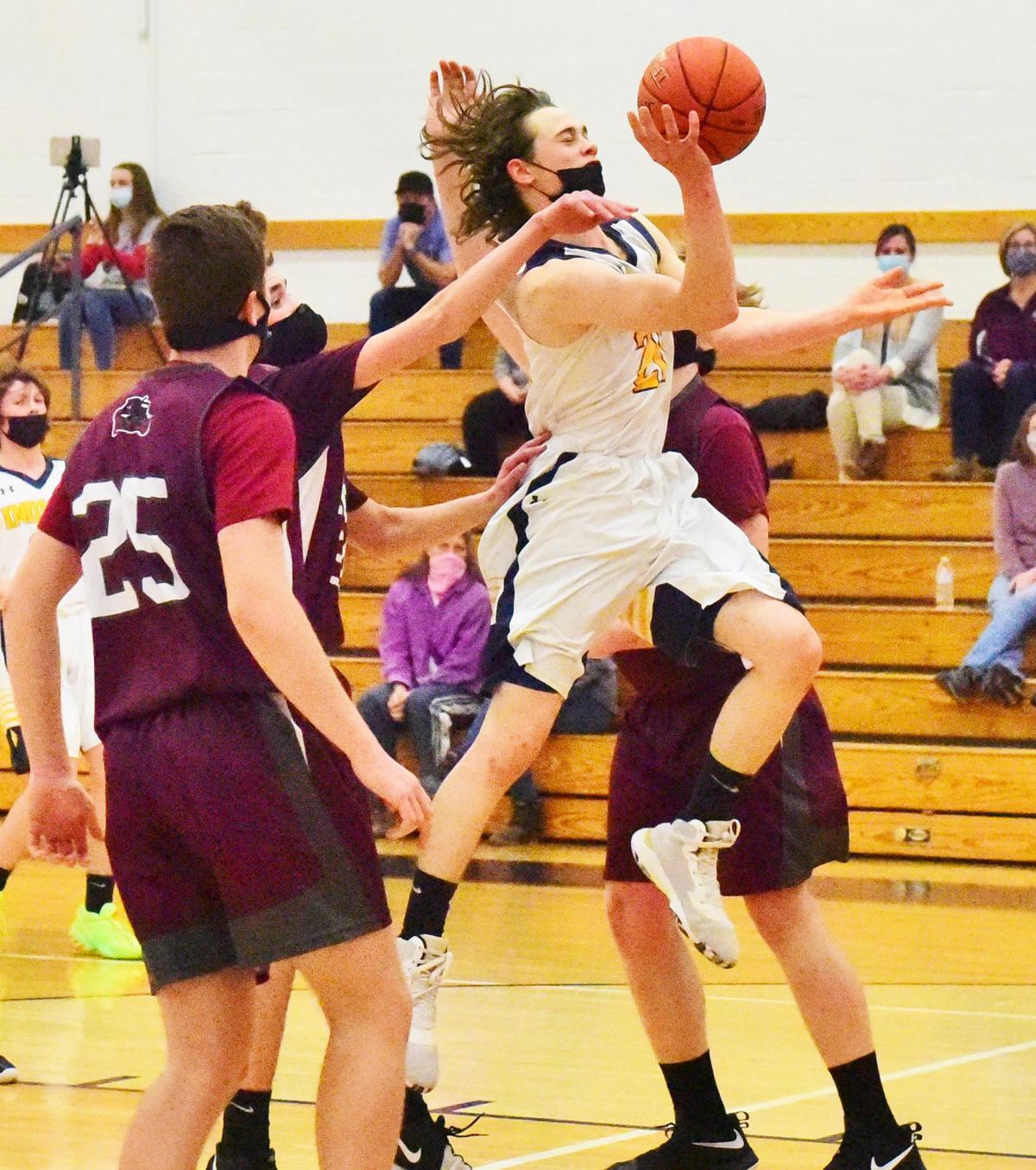 McGuire Painer drives to the hoop during the Indians’ loss to NEB on Thursday, Feb. 25.

Mansfield's Karson Dominick takes a jumper during their loss to Wellsboro on Wednesday, Feb. 10.

Liam Manning rises up over the defense during the Hornets win over Mansfield on Monday, Feb. 22.

Brandon Thompson blocks a shot by Conner Adams during Liberty’s loss to Wellsboro on Monday, Feb. 8.

McGuire Painer drives to the hoop during the Indians’ loss to NEB on Thursday, Feb. 25.

Tioga Publishing has announced our First Team All Stars for the 2021 boys basketball season.

Next week we will be announcing our First Team All-Stars for the 2021 wrestling season.

Possibly the most underrated guard in the entire Northern Tier League, Alex Stein was also possibly the savviest player on the court for the Mansfield Tigers basketball team.

Stein averaged 11.6 points, 4.5 rebounds, 1.9 steals and 3.8 assists per game, but the numbers don’t tell the whole story for the senior point guard.

When it comes to making the smart play, Stein was nearly flawless and was also an underrated defender tasked with facing a lot of the top guards in the NTL.

Stein always came to play on the biggest stage, and in their upset victory over Troy, made all the right plays down the stretch for his team to hold on for a victory against the powerhouse Trojans.

He also had a few hot nights during the season, scoring 15+ points on seven separate occasions.

McGwire Painter was one of the best scoring guards in the Northern Tier League during the 2021 season, and on multiple occasions scored in bunches and was a player who could not only shoot the deep ball but also take it to the paint and finish over much bigger players.

Painter averaged over 15 points per contest and 227 total points during the season and was the engine for the CV offense throughout the year who, despite not coming up with many wins, played many good teams close throughout the season.

Painter also led his team in three-pointers with 15 and will be one of the most interesting returning players in the 2021-2022 season.

Defensive specialist Colton Litzelman left it all on the floor in every contest during the year for the North Penn-Liberty Mounties in 2021 and was one of the unsung heroes of a team that won 79% of its games during the past two seasons.

Litzelman had one of the best all-around games in the league, and despite being tasked to guard the top perimeter players in the league on a nightly basis, was still able to score 8.5 points per game while also adding six rebounds and three assists while also grabbing 3.2 steals per game.

He was also invaluable in terms of versatility and would guard against the point guards to power forwards when called upon and was also a more than competent point guard when Noah Spencer was on the bench.

He also was one of the best players in terms of deflections and could be seen frustrating opponents with his quick twitch ability to get himself into passing lanes and wreak havoc.

The big man in the middle for the Liberty boys basketball team, Brandon Thomspson once again made his presence felt in the paint in his senior season, and led the Northern Tier League and District 4 in blocks for the second consecutive season.

Thompson expanded his scoring abilities in the post in 2021 and improved his scoring to 14.6 points while also hauling in a team-high 8.3 rebounds per contest and blocked 2.2 shots per game.

The six-foot-seven-inch center was the back-line for a defense that filtered almost any driving opponent to and would alter countless shots on a nightly basis and was a matchup nightmare for most teams.

Liam Manning was dominant in the paint for the Hornets in 2021 and led the league in double-doubles and total rebounds in 2021 as he helped a young team to a successful 15-4 year.

Manning was a physical force in the paint with great size, and once he figured out how to use his size and strength to his advantage was nearly unstoppable when he gets himself into the paint in post-up positions.

His growth from 2019 to 2021 was uncanny and should be an excellent sign for Wellsboro as they return every starter to their lineup next season.

Freshman scoring phenom Karson Dominick burst onto the scene in the 2021 season and opened up his career scoring double-digits in his first nine games of his season.

He ended the season averaging 14.6 points to go along with 6.6 rebounds and 1.5 steals per contest and has an extremely consistent shot for a player so young.

Dominick shot an efficient 42% for the floor and given his volume of shots was extremely productive from nearly any spot on the floor.

He also shot 37% from three-point range and had a few jaw-dropping performances from deep, hitting three or more three-pointers on eight separate occasions.

His offensive game should only grow in years to come with the freshman standing at six feet three inches tall with a big frame.