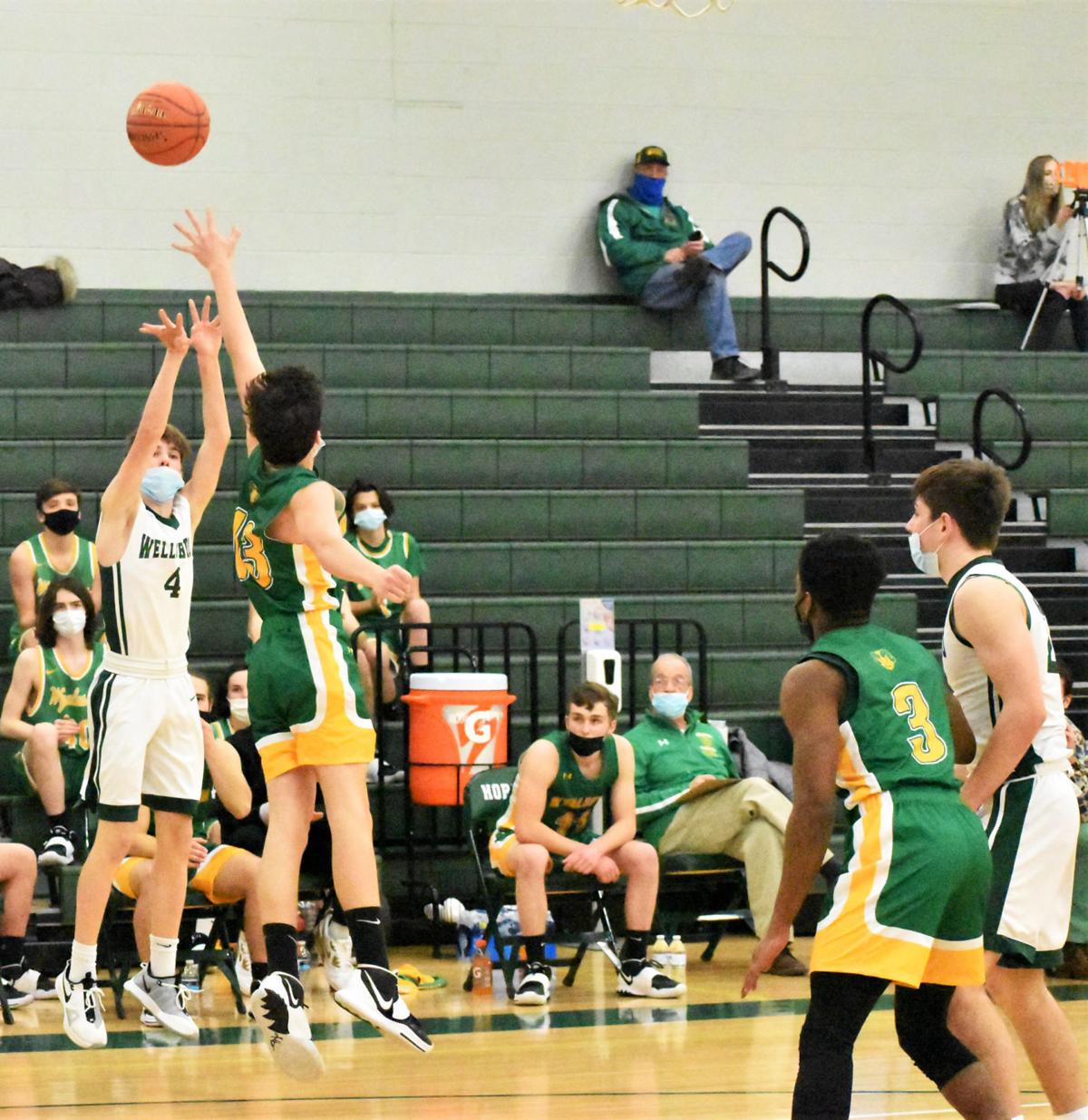 Peyton McClure shoots a three for the Wellsboro Hornets during the 2020-2021 basketball season. 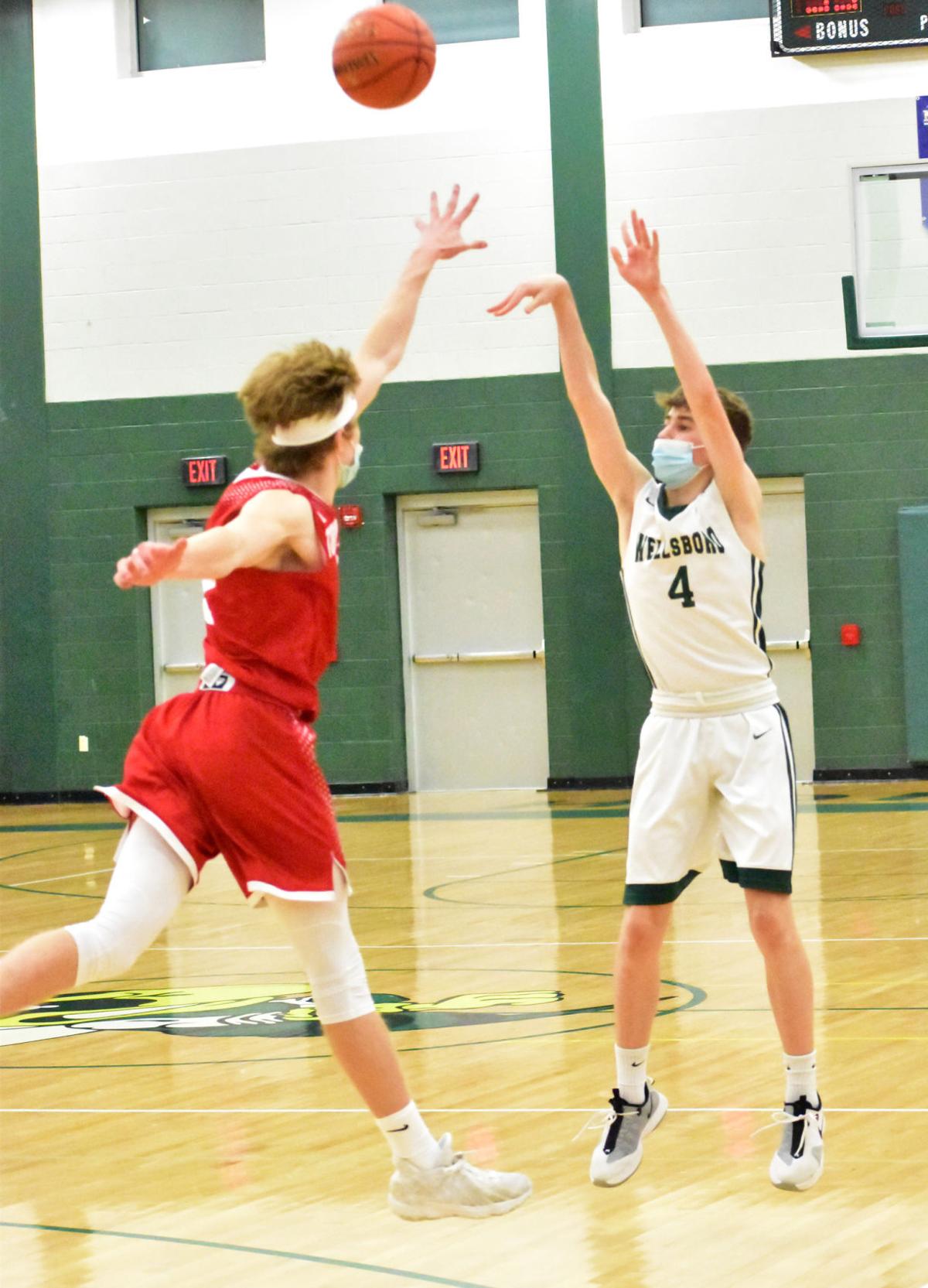 Peyton McClure shoots a three for the Wellsboro Hornets during the 2020-2021 basketball season.

WELLSBORO — Not many high school players have the go-ahead when shooting the three-point shot quite like junior Wellsboro guard Peyton McClure.

When talking basketball, one of the most common terms you here for gifted scorers and shooters is that they have what is called the ‘green light’.

The green light means that the player has garnered the trust of the coaching staff in a way that no matter where on the floor, or when in the possesion, they have free-range to pull the trigger on their shot at any point; and McClure has just that heading into the 2021-2022 season.

Hornet shoot the cover off of the basketball, knocking down 52 triples on the year (best in the entire Northern Tier League and tied for fourth-best in District 4), it’s no surprise why his coaches and teammates have no problem with him getting off his shot whenever possible.

The senior has now added even more to his shooting repertoire heading into what should be a huge season for Wellsboro basketball and McClure is set to have an even greater impact on his team as he has the go-ahead to keep shooting his shot.

“I call him (McClure) a gunslinger or a sharpshooter,” Wellsboro Head Coach Steven Adams said. “He just has that shooter’s mentality, and I love it. He’s always got the green light from me and I think him knowing he has that green light helps him and he never minds the moment.”

Wellsboro, who boasts some imposing players this season in the post such as Liam Manning, Cameron Brought and Hayes Campbell, makes McClure a key piece for team with lofty expectations, and his production from the three-point line will open things up for others while also being one of the go-to scorers in big-time situations.

“He wants the ball in the clutch,” Adams said. “Him being able to shoot the ball, it helps players like Liam (Manning), Darryn (Callahan), and Conner (Adams) to get open. When you have guys that can shoot it opens up the floor. So if teams are going to double anyone, they have to pick their poison. We’re not afraid to try to let our maybe third or fourth option be the one to beat you and have a 25-point night.”

McClure proved able to do all of those things last season, as he had spurts on nights where it looked like he couldn’t miss if he tried.

McClure knocked down at least one three-pointer in all but two games last season (one he didn’t play in) while he knocked down three-or-more triples in 10 separate contests.

He topped the 10-point mark 10 times and the 20-point mark twice, and during those games never made less than two three-pointers.

During his 20-point outings, he was able to catch fire as he knocked down seven three in his record-setting 25-point performance while connecting on five threes in a 21-point outing as well.

He ended up as the third-leading scorer on his team at 10.8 points-per-game, despite taking nearly all of his shots from long distance.

His consistency shooting the ball was a huge lift last season, but with another year of experience under his belt, Coach Adams believes he’s been able to develop even further and added some new tricks to his arsenal.

“His IQ, in general, is just super high,” Adams said. “He’s a smart young man and he uses that to his strength…. Peyton has also worked on some things this year to develop his jump shot. He was known as a set shooter last year, and he got all kinds of looks, just think about how many looks he’ll get now as not only a set-shooter but a jump shooter as well.”

With his game expanding, McClure looks like a lock to be one of the top shooters in the area and will be even more dangerous this season as Wellsboro looks to take home the Northern Tier League Large School Title during the 2021-2022 season.

“Here’s a kid who had a tremendous offensive year and took time in the offseason to work on a couple of other areas of his game,” Adams said. “That is going to make him even better. That’s what I like about this whole team, they didn’t get as many games as we wanted to this summer because our guys had other commitments. And we understand that. But when they did work on things, it was quality. And I think that says a lot about our approach.”

With one of the most fluid shooting motions in the Northern Tier League in an offense that garners a lot of attention in the paint, McClure has flourished in his role as a shooter and credits his success to honing in on the small details and mechanics in his form.

“The biggest thing is just following through honestly,” McClure said. “Focusing on the follow-through seems to help me. If I’m missing I just try to make sure I’m following through with enough arc on the ball. If I’m not making shots, it’s one of those things usually and I fix that and they start falling.”

The confidence of the coaching staff in the sharpshooter is warranted, with McClure proving night-after-night that he has one of, if not the best, three-point jump shot in the league.

McClure even set a school record this past season, knocking down an incredible seven threes in just one game against Northeast Bradford.

“I knew I had hit a lot that game and at halftime, someone was like ‘You have four threes already’,” McClure said. “I always know when I’m hitting them, but it’s not like I’m counting them or anything.”

He has also shown the abillity to get hot hand at any given point in a game, and if early in the contest McClure sees one swipe nylon, expect to see them fall in bunches the rest of the night.

“The first one to go in is always a relief,” McClure said. “It’s like, ‘Okay, I got it, I’m in the game now.’ From there, I just sort of get into the flow of the game and don’t think about it.”

McClure has shown his ability to knock down shots from anywhere on the floor and has pointed to his emphasis on consistency that has been the biggest help him to becoming the shooter and player he is now.

“I just try to keep myself consistent when shooting I guess,” McClure said. “I have always had good hand-eye coordination, like ping pong and cornhole. Just those repetitive motions but I mean, I practice shooting a lot. I guess that’s the main reason for the success.”

So with the upcoming season around the corner, expect to see McClure light things up from deep on many occasions, as he continues to shoot the cover of the basketball and maybe rewrite some more shooting records in the Wellsboro record books.

“I can’t put any expectations on that yet,” McClure said with a smile. “But, who knows what could happen.”

Partly cloudy this evening, then some snow showers after midnight. Low around 25F. Winds W at 5 to 10 mph. Chance of snow 40%.

Partly cloudy this evening, then some snow showers after midnight. Low around 25F. Winds W at 5 to 10 mph. Chance of snow 40%.

Cloudy with snow showers mainly during the morning. High 34F. Winds SW at 5 to 10 mph. Chance of snow 70%. Snow accumulations less than one inch.