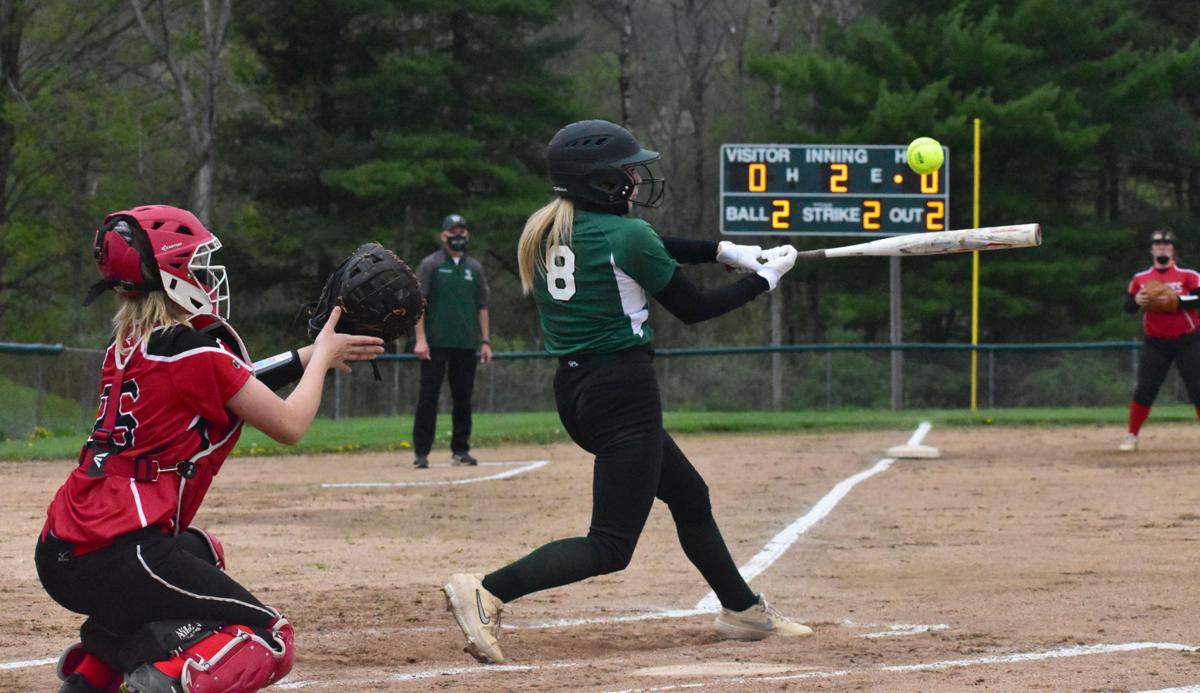 Junior Emma Coolidge stretches out for the ball while Liberty’s Mollie Hall races to reach first during their contest on Monday, May 3. 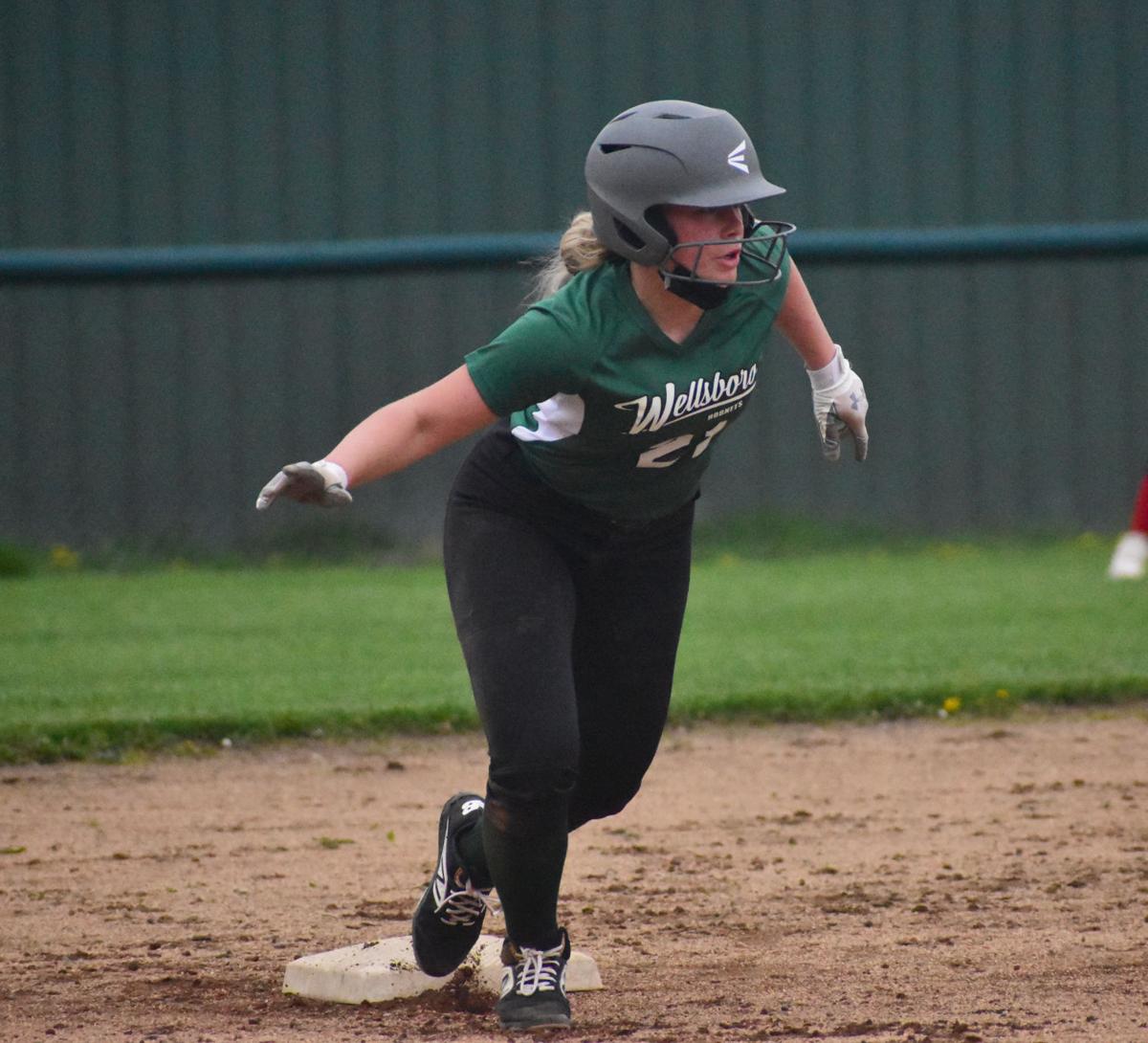 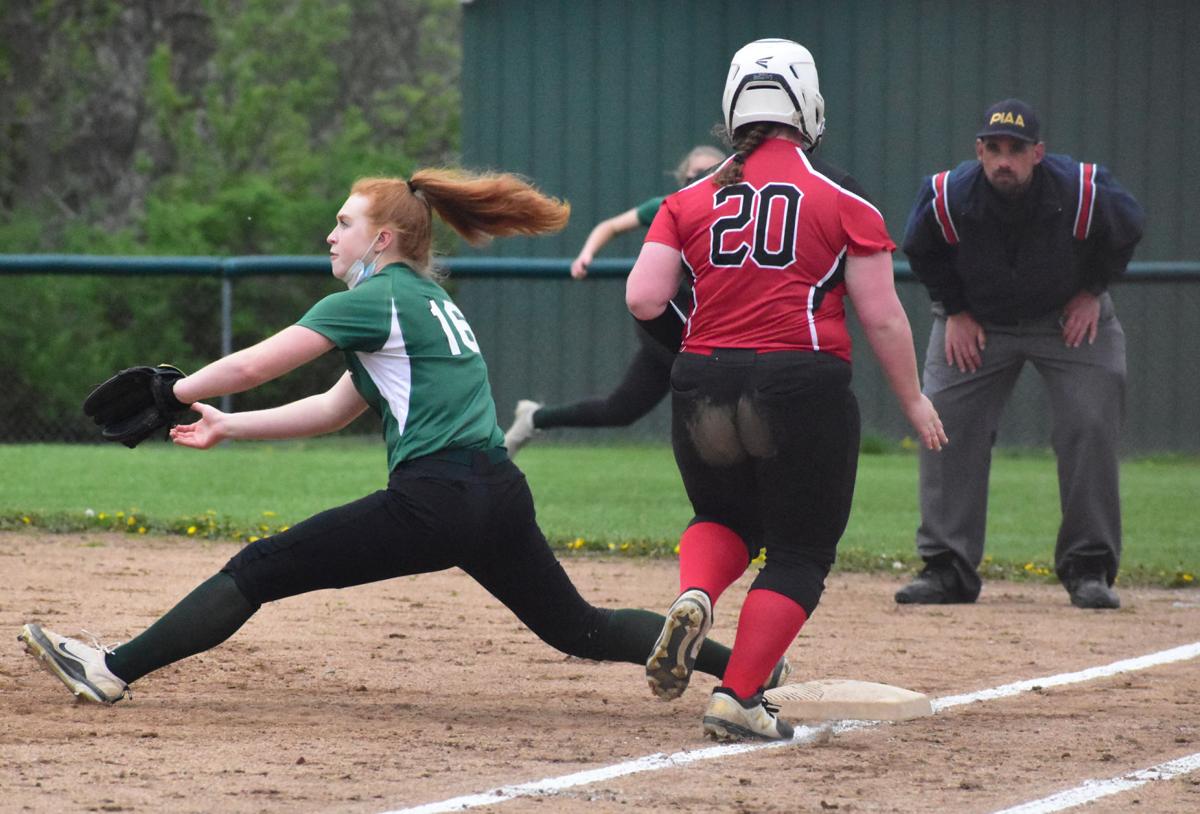 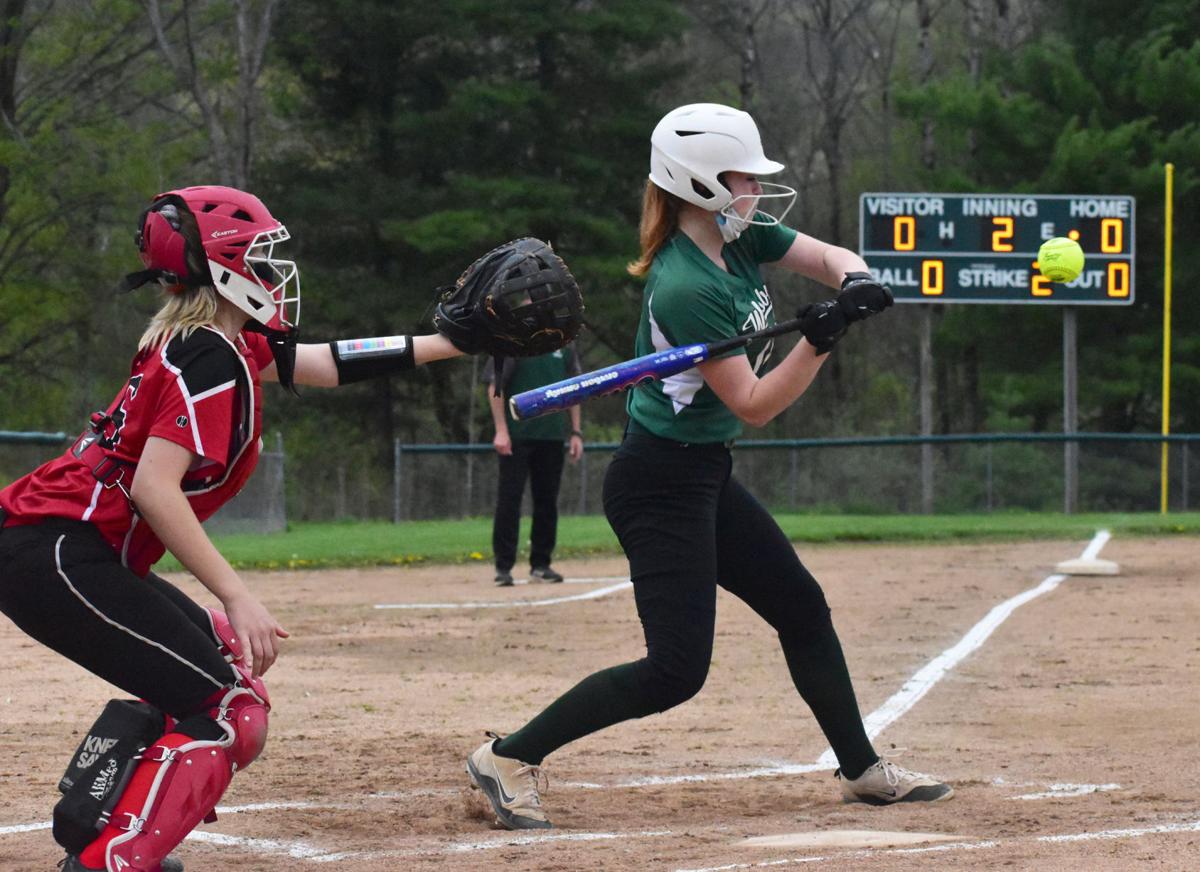 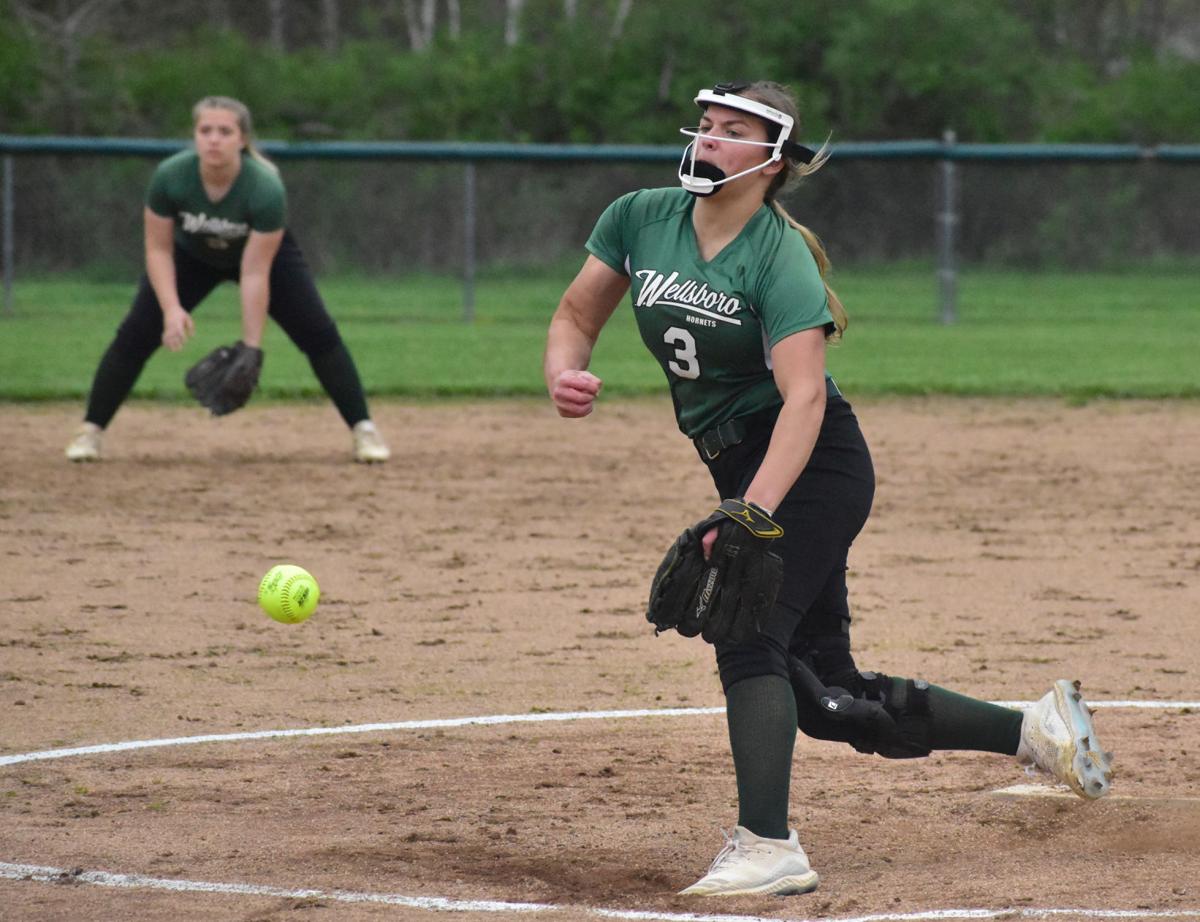 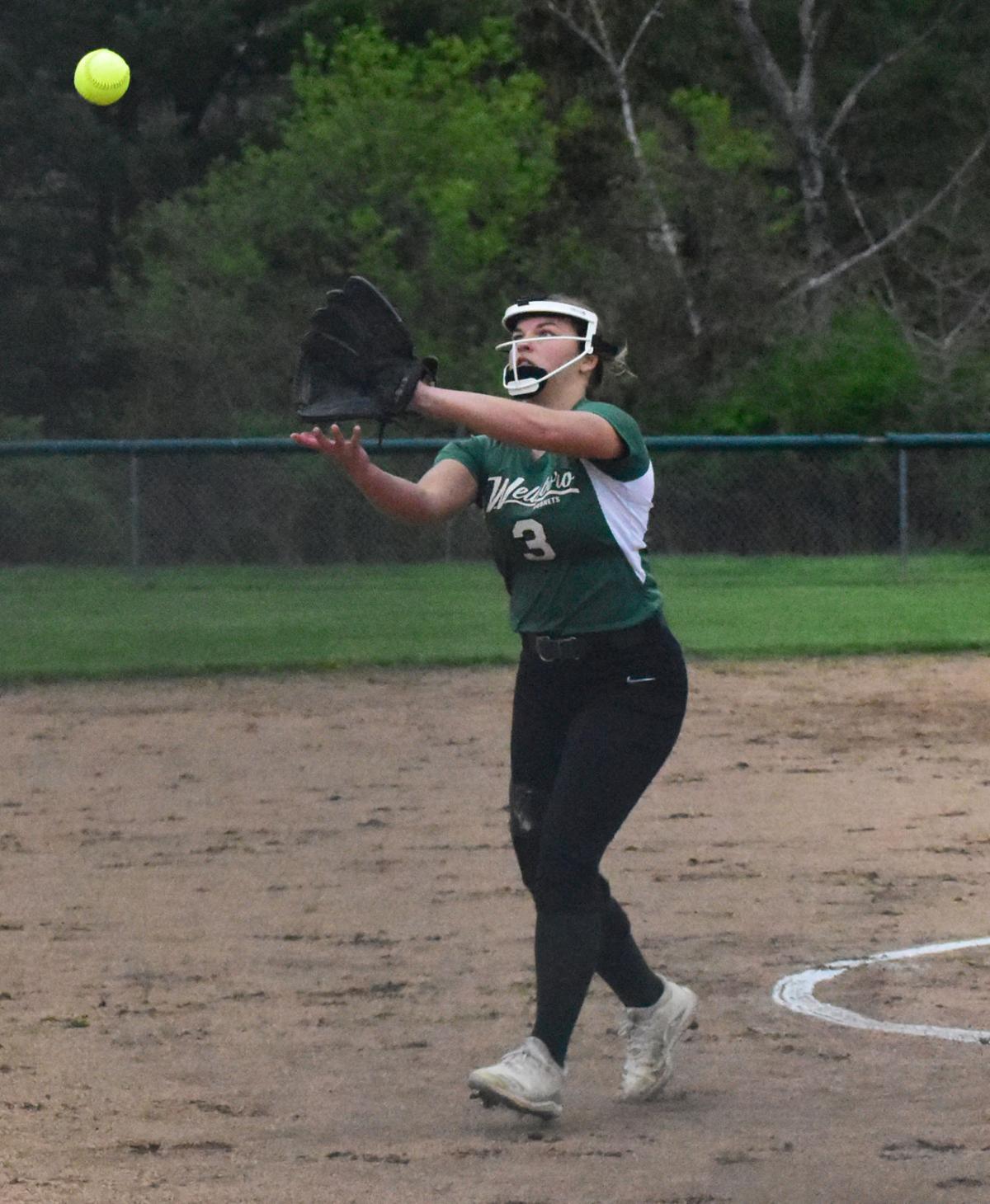 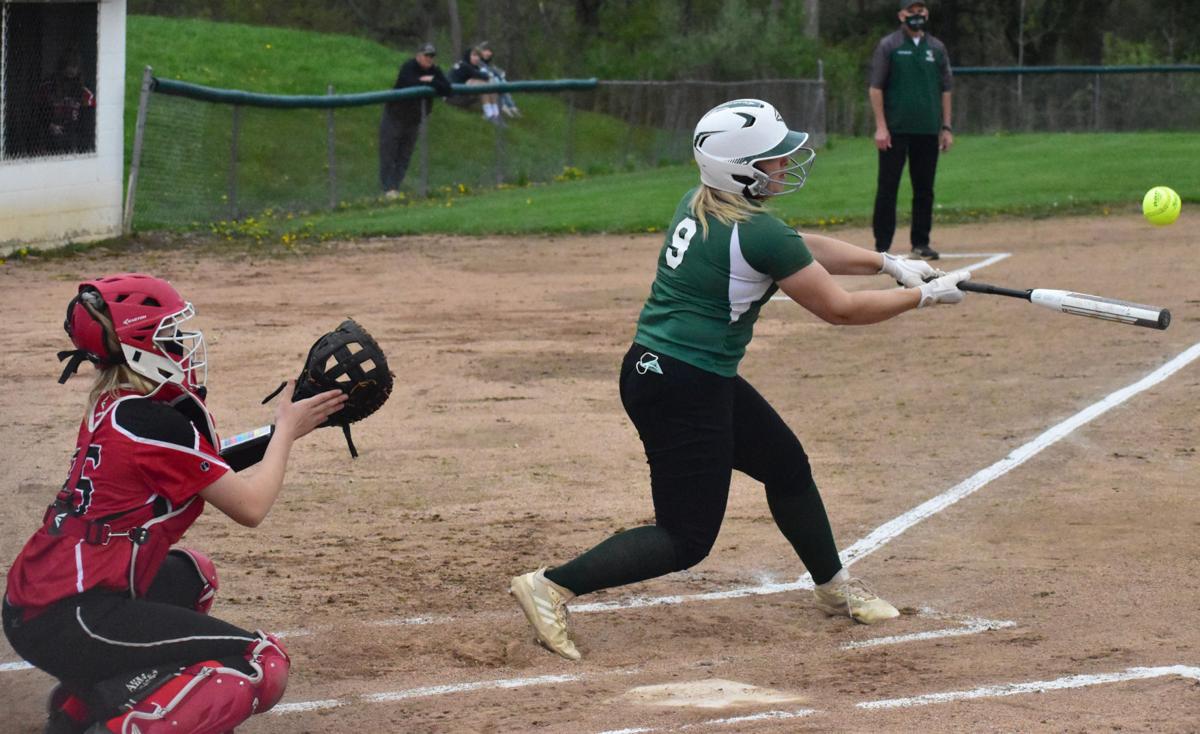 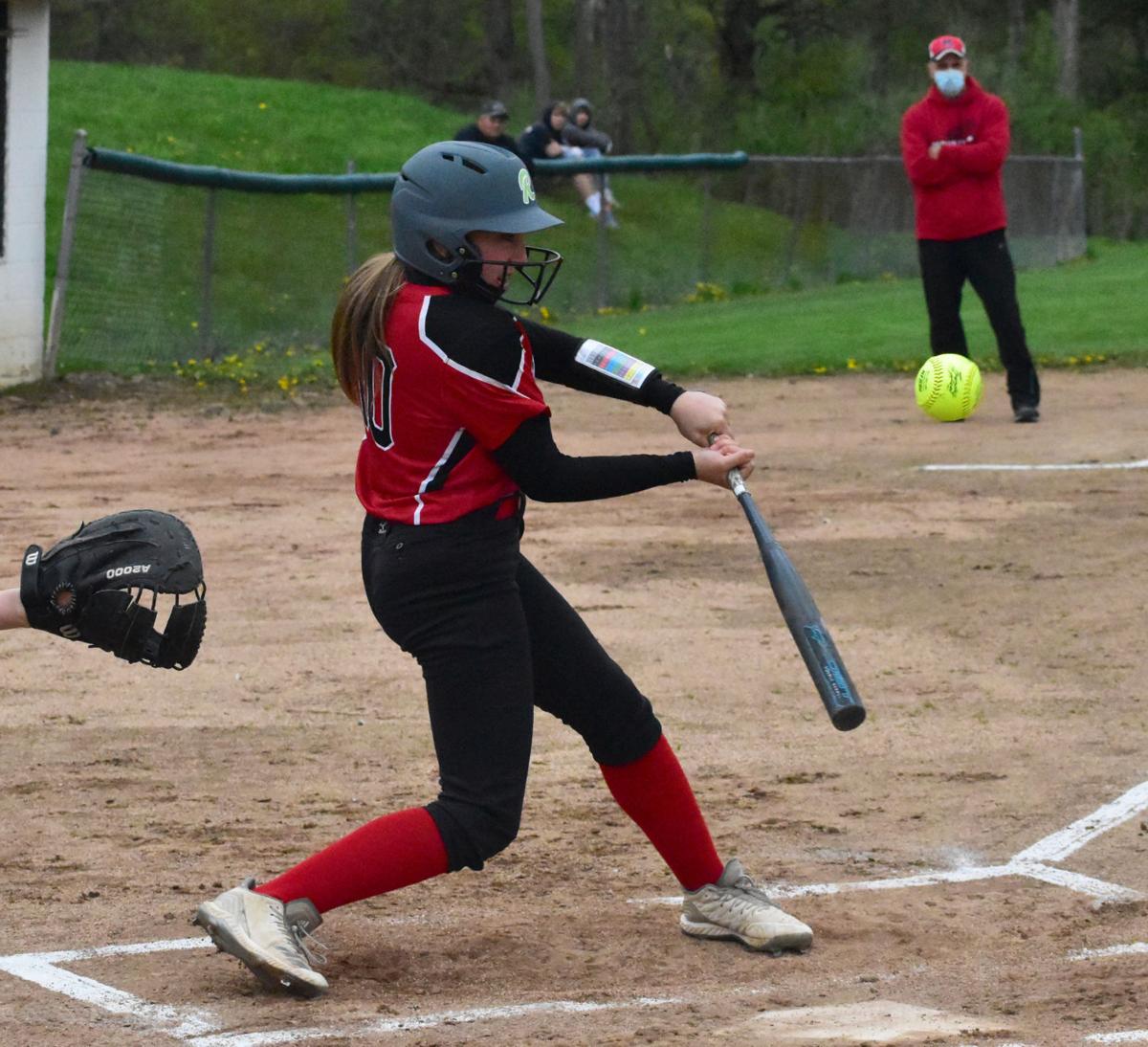 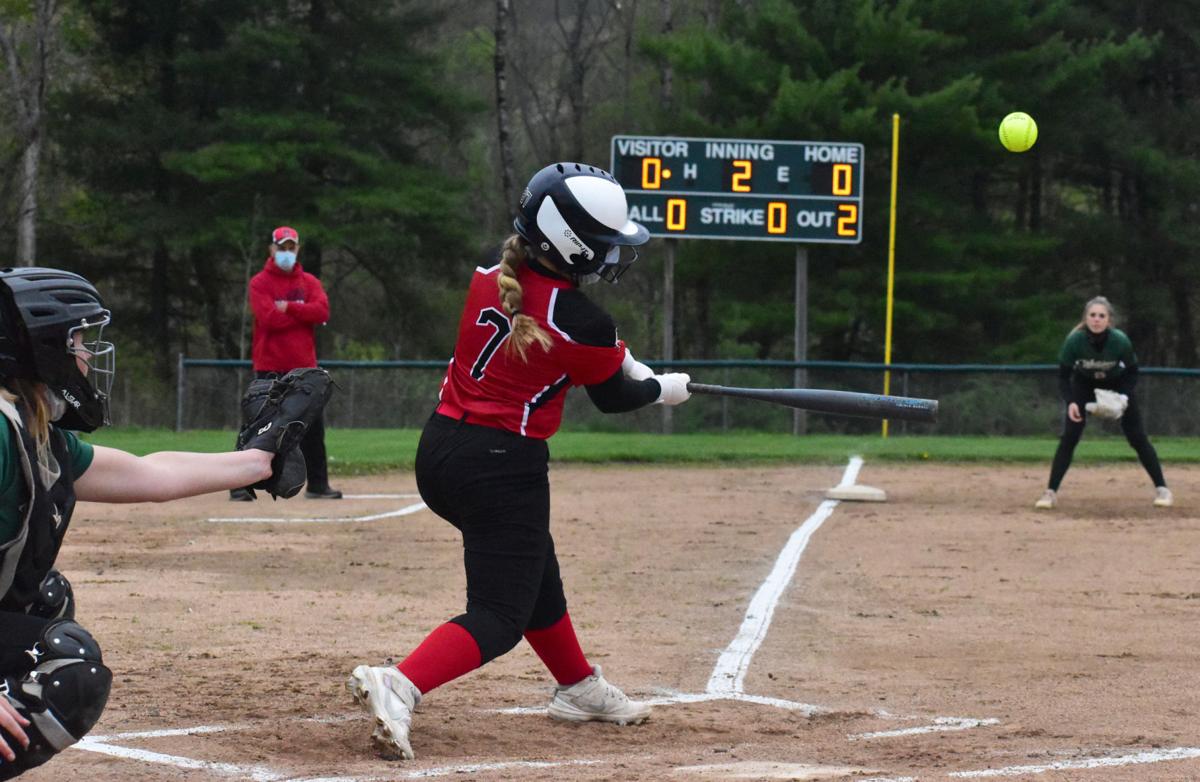 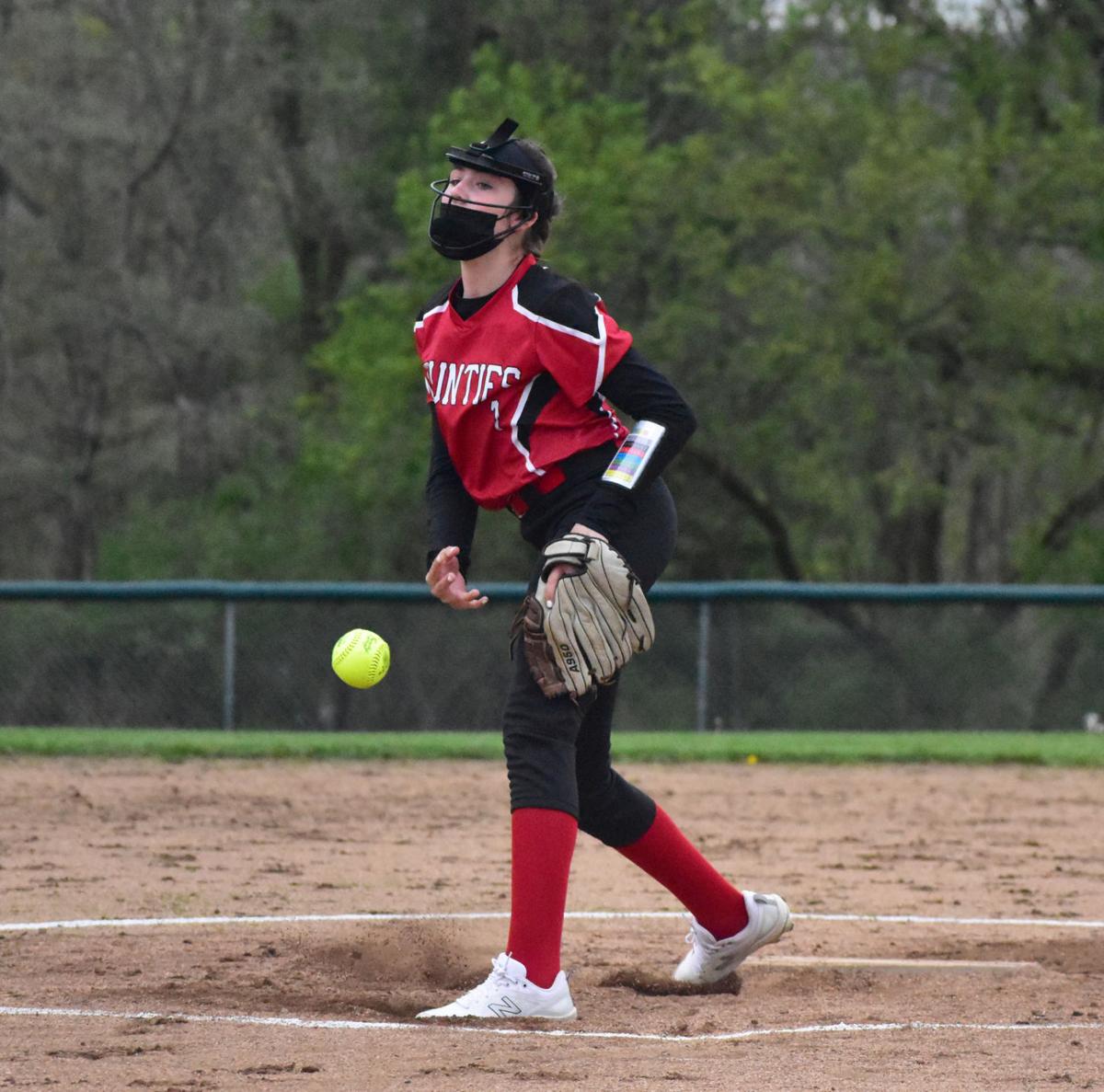 NP-Liberty's Mackenzie Tice throws a pitch during their contest with Wellsboro on Monday, May 3. 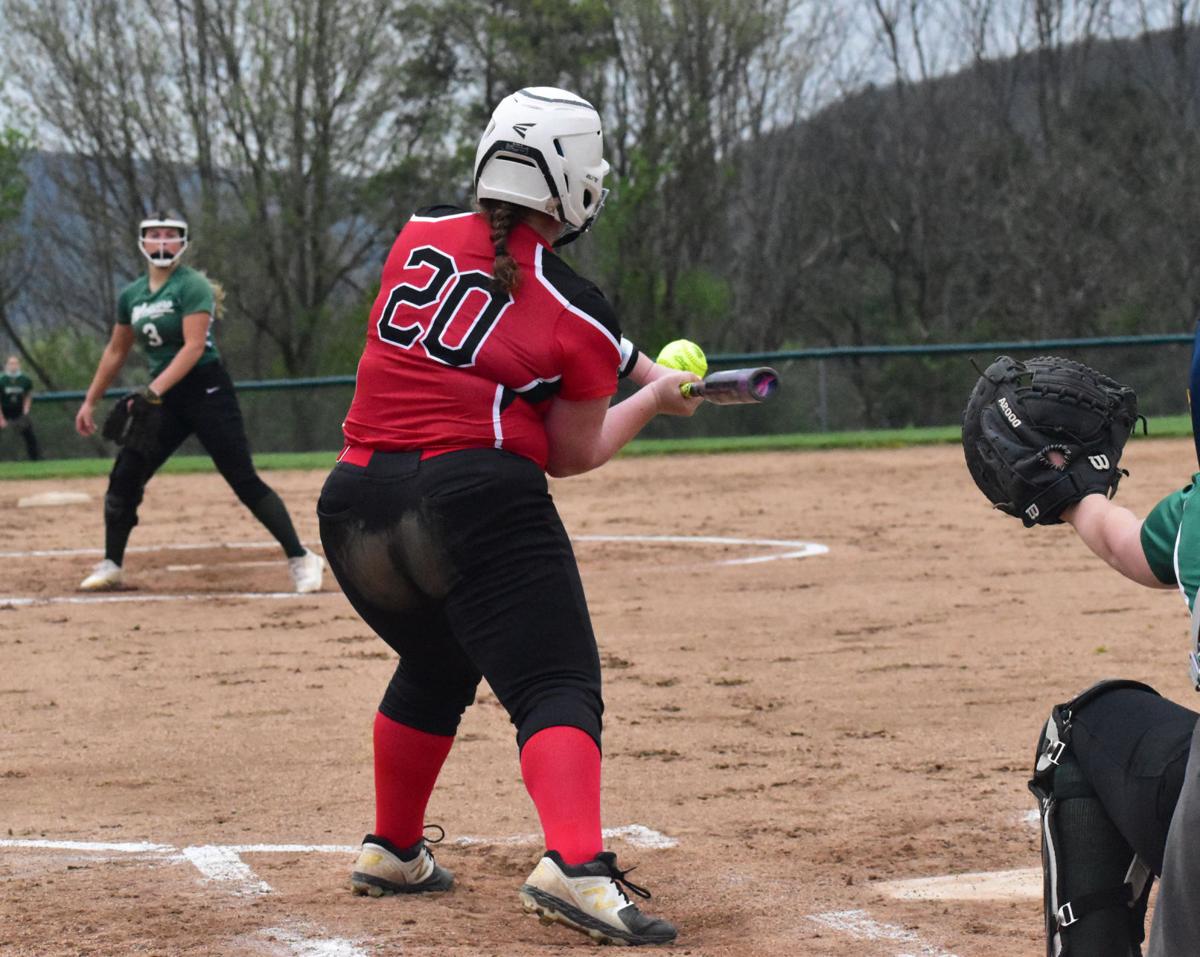 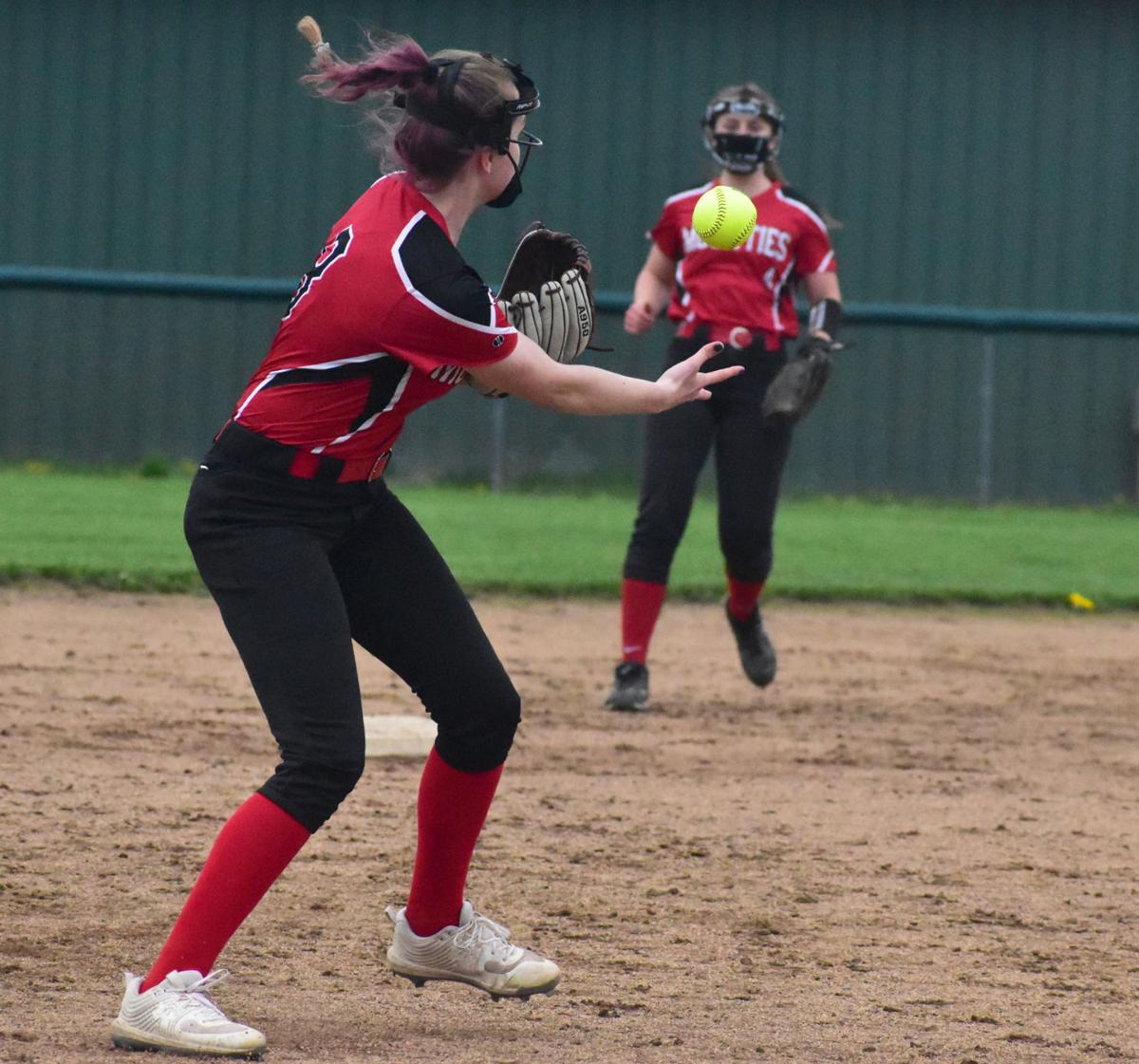 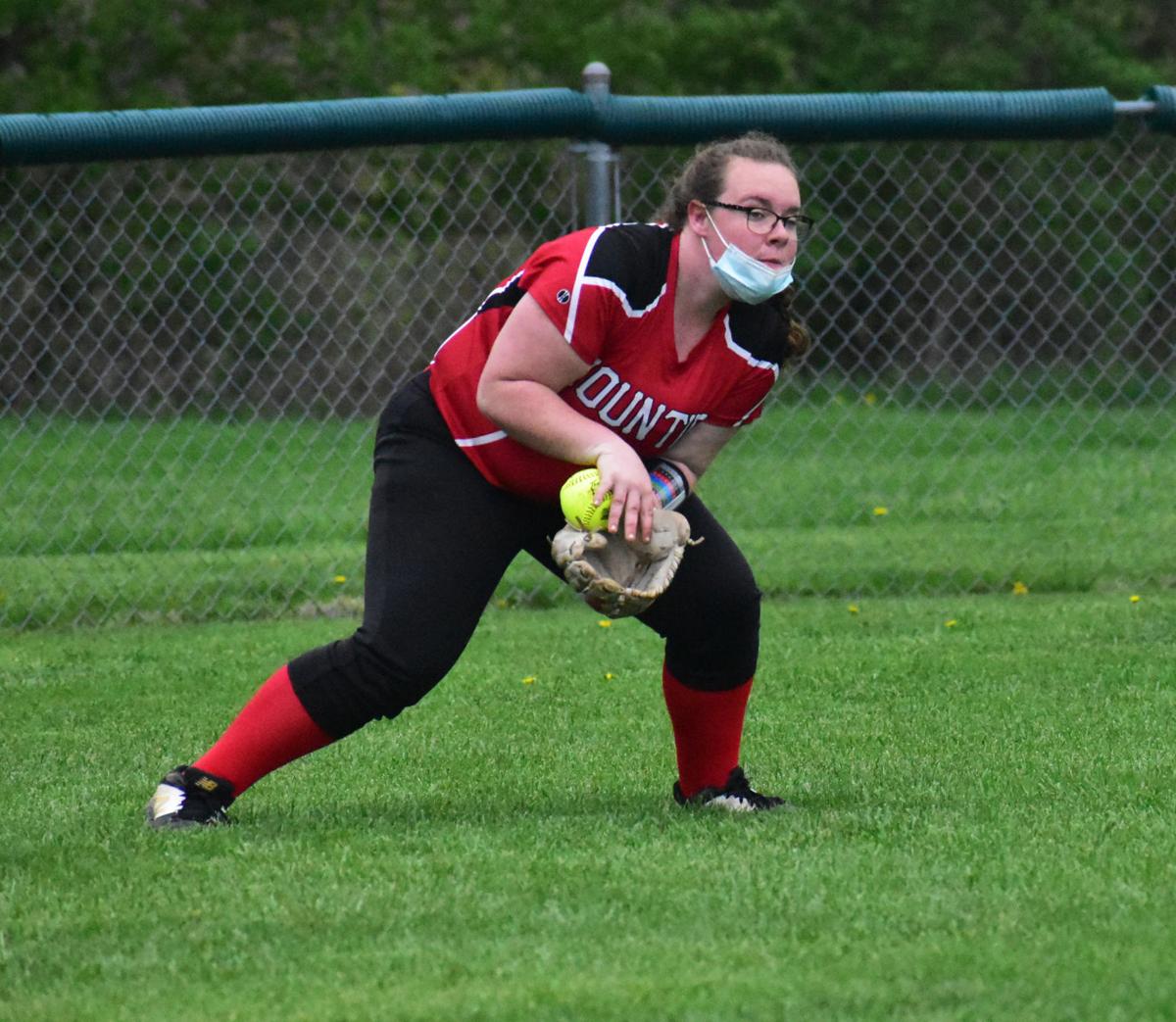 Junior Emma Coolidge stretches out for the ball while Liberty’s Mollie Hall races to reach first during their contest on Monday, May 3.

NP-Liberty's Mackenzie Tice throws a pitch during their contest with Wellsboro on Monday, May 3.

“I’ve been extremely fortunate to have the opportunity to work with and coach so many talented players. It’s because of their hard work and effort that Wellsboro softball continues to be so successful,” Brought said. “Reaching 50 wins is a nice footnote to the real story which is playing winning softball.”

The Lady Hornets did just that, and after not playing their best brand of softball in their first meeting against Liberty where they lost 12-8, put together a complete performance to pick up the win and even the season series at one apiece.

“We have improved with every game this season. This game was a much better representation of our team and what our strengths are; strong hitting up and down the lineup, excellent pitching and mistake-free defense,” Brought said. “In our earlier game against NP-Liberty, to their credit, they capitalized on some miscues on our part and it cost us. This time we didn’t provide them any opportunities and the score reflected that.”

In their loss to Liberty earlier in the season, Wellsboro had seven errors that led to their downfall, in their contest on Monday, the Lady Hornets cleaned things up and only had one.

During the contest, neither team was able to get on the board during the first two innings, with the pitching duel between Liberty’s Mckenzie Tice and Wellsboro’s Kerrah Clymer in full effect as they both dealt out four strikeouts in the opening two innings of play.

Wellsboro was able to get things going in the third inning as they poured in four runs with Chelsie English racking up two of her game-high five RBIs on a single to left field that pushed home Jena Boyce and Jordyn Abernathy.

“Chelsie is really hitting her stride and the timing couldn’t be better as we’re in that stage of the season where every game is critical. She battled through a foot and hand injury early on but is now 100% healthy. Depth in the lineup is a major reason we’ve been able to have success,” Brought said. “Late in games, you start looking ahead at where your opponents will be in their lineup for the last inning or two. This is where we shine as our seven, eight and nine batters have been key in finding ways to get on base and flip the order.”

Maddi Bordas was also able to score Emma Coolidge in the next at-bat on a double while English was able to cross the plate on one of the six Liberty errors on the night to open the flood gates and push their lead to 4-0 early.

After being held scoreless in the fourth, Wellsboro poured in another seven runs in the fifth and sixth inning. Boyce recorded an RBI on a single, and English racked up two more RBIs on a home run shot to left field that pushed the score to 7-0 in the bottom of the fifth inning.

Wellsboro put the game away in the sixth inning with Clymer scored on a steal at home, English grabbing another RBI, and Coolidge and Bordas both scoring on errors to finish the game 11-0.

Wellsboro was able to score 11 runs on just six hits with errors for Liberty once again being their downfall as they racked up six in the game and Wellsboro took advantage of nearly all of them.

English had the hot bat on the night as she went 2-4 with five RBIs and a home run.

Boyce added a 1-3 day with one RBI, Bordas went 1-2 with one RBI and Clymer and Abernathy both added hits in the victory.

Freshman Tice for Liberty pitched a solid game, only giving up five hits in four innings with only three of her seven runs allowed being earned and striking out eight batters.

Clymer pitched a complete six-inning game while allowing no runs and striking out six batters in the process.

Now Wellsboro moves into second place in the Northern Tier League Large School Division and with only eight games remaining on the schedule, will have a chance to possibly move to the top spot as they take on four league opponents in the final stretch of their schedule.

“I’ve felt since preseason that one of our biggest strengths is our team leadership. These girls deal with the pressure well. As evidenced by their two walk-off wins and other key comeback attempts against tough opponents,” Brought said. “We talk as a team about the strength of our league this season and how we have to be prepared to play our best every inning of every game. We enjoy our wins and reflect on our losses, but the next day we move on and start the process all over. Hopefully, we’ll play well enough to put ourselves in a position to contend for a league title.”

Wellsboro’s next contest is Wednesday, May 5 as they travel to Athens to take on the first place Lady Wildcats who they topped on a walk-off hit earlier in the year.

A mix of clouds and sun during the morning will give way to cloudy skies this afternoon. High 69F. Winds W at 5 to 10 mph.

Cloudy early with showers for the afternoon hours. High near 65F. Winds SSW at 5 to 10 mph. Chance of rain 40%.