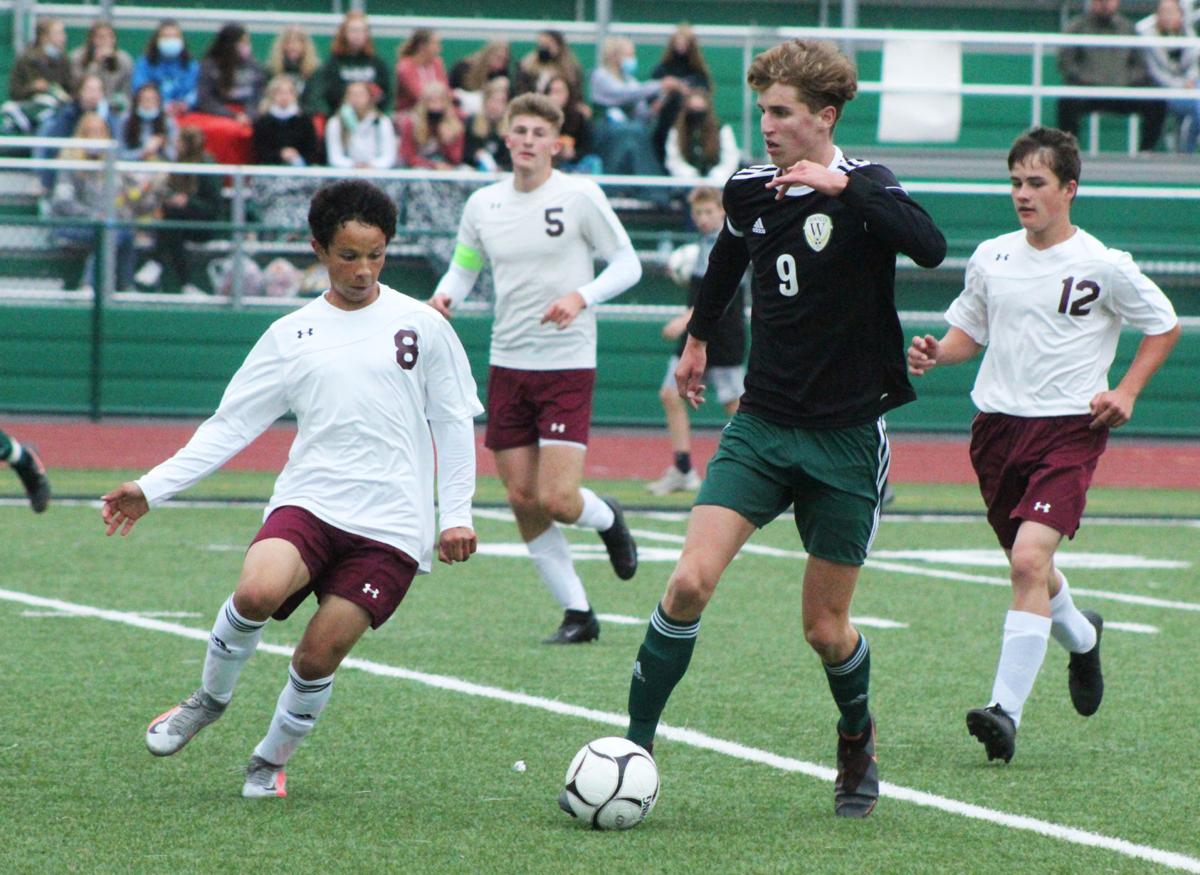 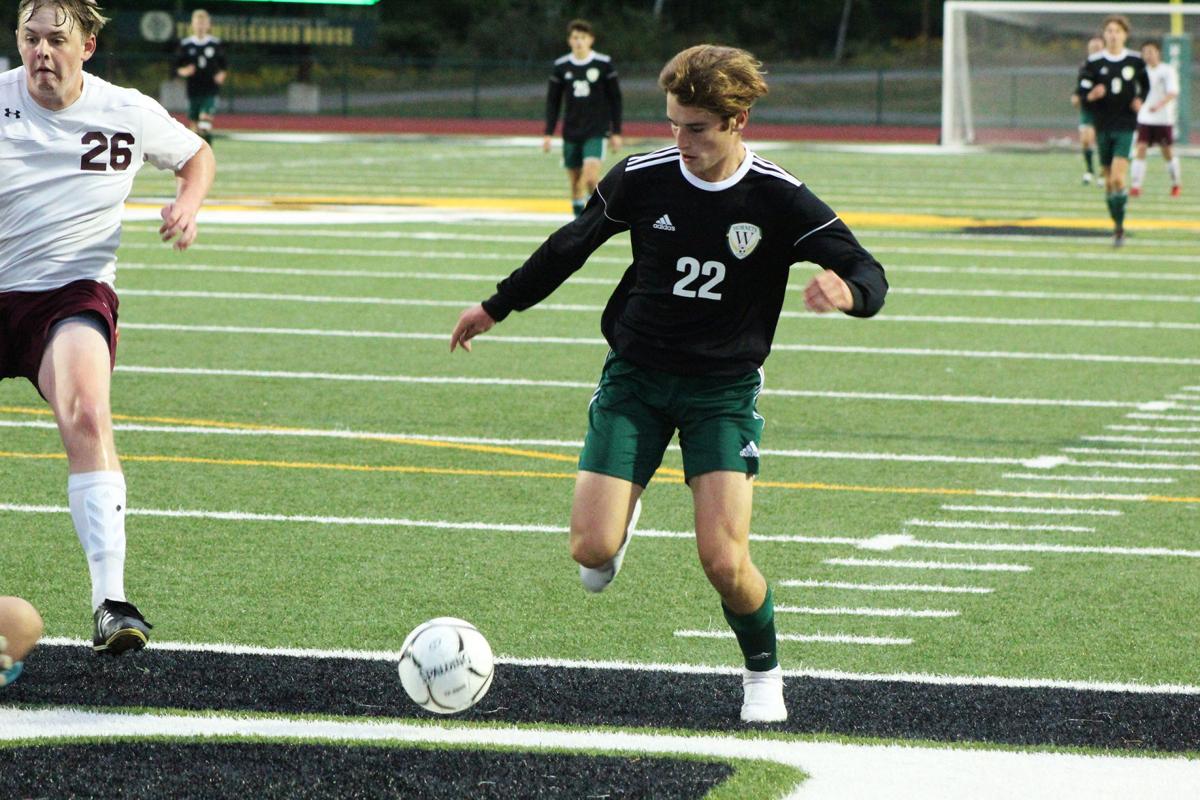 Wellsboro Hornets soccer player Jack Poirier sneaks by for a second half goal during the Hornets 12-2 win over NEB on Thursday, Sept. 17. 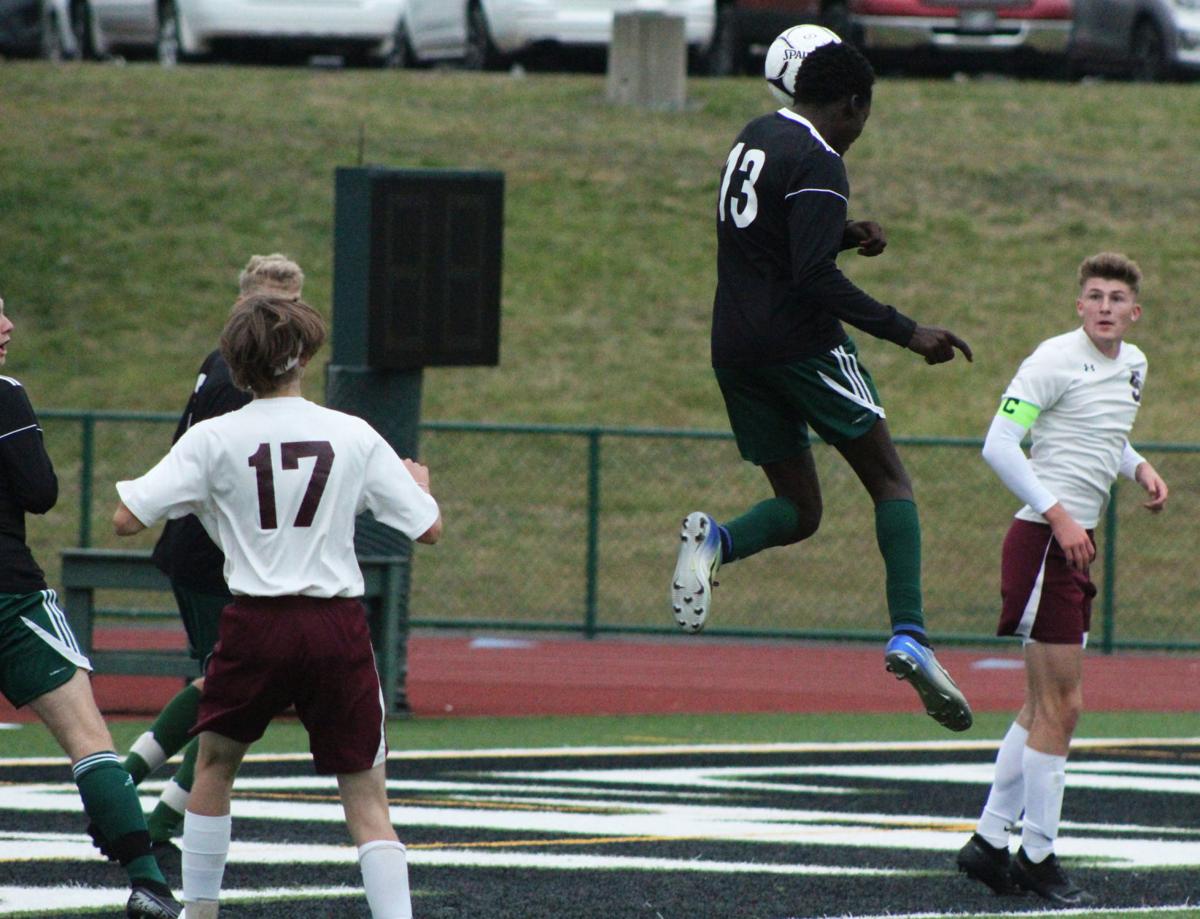 Wellsboro Hornets soccer player Joseph Grab soars through the air for a header during their win over NEB on Thursday, Sept. 17.

Wellsboro Hornets soccer player Jack Poirier sneaks by for a second half goal during the Hornets 12-2 win over NEB on Thursday, Sept. 17.

Wellsboro Hornets soccer player Joseph Grab soars through the air for a header during their win over NEB on Thursday, Sept. 17.

WELLSBORO — The Wellsboro Hornets boys soccer team conducted their senior night a bit early in 2020 during their home-opener against Northeast Bradford, and celebrated with a blowout victory of 12-2 to kick off their season.

“ It has been a long wait with many uncertainties on this journey to the season opener,” Head Coach Todd Fitch said. “I was pleased with how quickly the boys found a rhythm and flow and were able to take control of the match. We were able to give everyone some quality time on the field, which was rewarding following their persistence through the summer and extended preseason.”

During the contest, Wellsboro showed little to no rust for a team that hasn’t played an actual game in nearly 10 months, and put together a spectacular performance in which Northeast Bradford looked outmatched from the minute the clock started running.

“Missing out on the opening scrimmages and the matchup with Millville was certainly a disappointment, but as with everyone, we are now just thankful to be playing,” Fitch said. “The cohesiveness and communication on the field was outstanding and will be necessary in helping guys become comfortable in some new roles this season.”

Six players got in on the scoring action, with senior Kaedan Mann and Will Poirier both notching hat tricks during the match with Poirier adding a fourth goal as well, Joseph Grab notching two goals and Zach Singer, Owen Richardson and Jack Poirier all adding another goal to round out the dominant offense performance for the Wellsboro Hornets soccer team.

Ethan Ryan also had a strong night between the posts, recording three saves and acting as the restart for plays consistently throughout the night for a team that seemed to be playing chess with their offensive attack and passing while the other team was wondering what game they were even playing.

“Ethan Ryan made some great distributions that were on the mark to his target and our defenders opened the field and found passing lanes to get the ball to the playmakers and front runners who found the back of the net,” Fitch said. “It was nice to see six different boys record goals tonight, but eleven boys were on the field making a contribution leading to that result. I find the magnitude of that unselfishness to be especially satisfying.”

In the first half, Wellsboro got off to an electric start, with Singer striking the first blow within a minute of the game starting. The Hornets continued to pour it on with four more goals and looked unstoppable during the stretch.

Things continued to roll the way of the Wellsboro Hornets in the second, as they added an incredible seven goals in the frame, and despite allowing two late goals were in complete control until the final buzzer.

With the season-opening win the Wellsboro Hornets team moved to 1-0 before their matchup on the road against the Towanda Black Knights on Saturday, Sept. 19.

In their next matchup against Towanda they continued their hot-start to the 2020 season, winning 12-1 after an incredible 11-goal first half that put Towanda out of contention early.

Grab had another hot night scoring the ball, with five goals in the effort to lead his team.

Jack Poirier also added an impressive three goals with Rowland and scoring two and Will Poirer and Mann each scoring a goal in the offensive-onslaught.

To go along with his goal, Will Poirier added an incredible seven assists on the night.

Their next game was against the Athens Wildcats at home on Tuesday, Sept 22, where they were able to top one of the best NTL teams in a 2-1 win.

Athens was able to take an early lead of 1-0, but the Hornets rallied back with Dustin Benedict scoring the deciding goal with only two minutes remaining.

With the win the Hornets snapped an 11-game losing streak against the Wildcats and have supplanted themselves as the top team in the NTL standings.

The Hornets remain undefeated (3-0) and take on Thursday, Sept. 24 on the road against Sayre